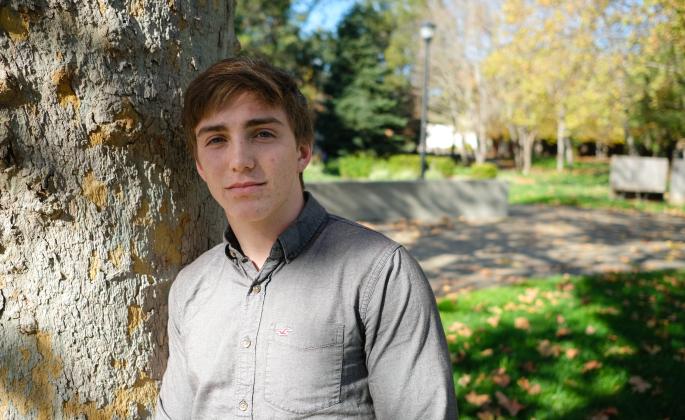 Third year student and SSU’s mixed martial arts (MMA) club organizer Shaemus Cullen has been immersed in sport since his elementary days spent on the basketball courts of the local Boys and Girls Club in Santa Cruz, California. His parents separated when he was small. His mom, a young single parent — just 17 when she had Shaemus — relied on the support of the Boys and Girls Club and its after school programs. It was there that Shaemus found himself drawn to the community born out of athletic competition. And, despite being a bit on the shorter side, he discovered he had particular potential in basketball.

Shaemus was in the third grade when his mom was diagnosed with thyroid cancer, and he found solace in sport. Learning the game and building camaraderie with his teammates provided a healthy distraction, offering him a space in which he could clear the fog of anxiety and fear that shrouded his thoughts when he was at home.

As a child, Shaemus didn’t have the tools he needed to understand how sport, and athletic competition more generally, existed in relation to his mental health. Now majoring in psychology, he can process his past relationship with basketball through a more critical and informed lens. He has since reflected that he was “using sports to get out of a confused and sad space,” a space he now understands as depression.

“I would lose myself in basketball when I didn’t understand what was going on with my mom,” he said of that time. “It made sense in a way that my mom’s cancer did not. It gave me discipline and routine that I desperately needed at the time. It taught me how to collaborate. I was building character. It felt good,” he added.

His mom’s cancer was one of his earliest experiences with depression. Shaemus was, he says, clearly conscious of the ways in which the cancer devastated his mom. He worried that she was ignoring her health, and being reckless with her cancer treatment, but he didn’t know how to communicate his fears.

“I don’t think I realized it until now,” he reflected, “but at some point, I started pushing her away because I didn’t understand what she was going through. It was hard on our relationship, even as she began to recover. Neither of us knew how to share what we were feeling. It was easier to play basketball. And so that’s all I did for a long time.”

Basketball, he said, was helpful — to a point. “You can only put so much of yourself into something, full force, before you burn out on it,” he offered. By late high school, Shaemus’ devotion to basketball, the sport that had once given him solace, a sense of community and purpose, was deteriorating. He was exhausted, playing not with passion or drive but out of obligation. “I was showing up for my teammates and my coach, but not for myself,” he remembered.

Burnout from basketball coincided with what Shaemus now recognizes as another deep and sustained bout of depression. He found himself disengaged not just from sport, but from his academics. While his high school classmates were starting their college search, he was skipping class and letting his grades fall. He risked dropping out but could not find the motivation to stay on track. His mom hadn’t had an opportunity to go to college and his father wasn’t convinced college was necessary. Few in his community could provide him a glimpse into what continuing his education might offer.

"I would lose myself in basketball when I didn’t understand what was going on with my mom. It made sense in a way that my mom’s cancer did not."

Fearing for his future, his then girlfriend called in her parents. They had both gone to college, and had both valued their experiences. They encouraged Shaemus to focus on a future beyond his life in Santa Cruz, stressing that he needed to find a way to show up — not out of obligation, not for others, but for himself. Basketball had helped in his younger years. Could getting back into athletic competition in a different form help again?

His dad had been involved in the MMA community and Shaemus was intrigued by the solo nature of the sport. He’d have no choice but to create his own routine, discipline, and consistency. He would have to show up for himself with his own passion. 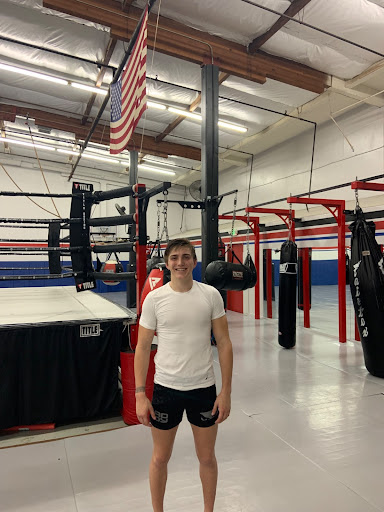 “I had a lot of time with older, positive male figures,” Shaemus said of the MAA experience. “The community drew me in as soon as I started.”

“People think MMA makes you more aggressive,” he added. “but it’s actually the opposite. You have to be vulnerable physically, and you are vulnerable emotionally. You are open with someone after you fight them. There's mutual respect.”

It was in that vulnerability, seeing himself in his opponents and respecting the fight they shared, that Shaemus first found a space in which to examine and explore his mental health.

“You talk about depression, you talk about hardship. It’s an accepting environment. There’s an honor in the community,” he said, adding: “the athletes are resilient. They persevere, consistently. Routine is everything for mental health. It’s the foundation I stand on. I have come to understand through MMA that I need that consistency.”

“I didn’t speak about my depression for a long time because I didn’t want to feel less than. I know now that finding a space in which to talk about what you’re going through doesn’t make you weak or lacking in anything. It makes you brave, it shows you still have a fight inside of you. There’s something really empowering about taking on the challenge.”

The athletic routine established by MMA and the healing environment created by the MAA community helped Shaemus return to the classroom, and eventually apply to college.

“It’s funny, given how poor a student I was for most of high school, but in the end, I really wanted a school where I could focus on academics,” he recalled when asked about his journey to Sonoma State. “As a low-income, first-generation student, I was introduced to SSU through the Educational Opportunity Program. It is such a supportive environment. I really felt set up to succeed, which is so important for a first-generation student who knows nothing about what to expect from college. And the SSU campus is beautiful! It was an easy decision.”

After a year of remote learning during the pandemic, Shaemus is thrilled to be back on campus. Both to return to in-person learning and his two majors — psychology and business — and to get back to the gym. Before the pandemic, SSU had only a Brazilian jiu-jitsu club on campus. Shaemus became the president and quickly expanded the club to the full scope of mixed martial arts.

“I’m now running my own club,” he said with nervous excitement. “I’ve been running it like a business — doing the marketing, the graphic design, the sales. Talking to people about why they should sign up. The response has been really positive!”

The campus club is part of a larger goal: to raise the visibility of MMA collegiate competition and to see the SSU club become the first recognized college MMA club team in the country. He dreams of sponsorships for student athletes, an athletic team house on campus, and scholarships for first-year MMA competitors.

He also wants to honor the MMA community, to showcase and celebrate the power it holds for those struggling with mental health.

“I still battle depression,” Shaemus said. “But I understand it more now. I’ve learned so much about it academically and reflected on my own experience enough to know the kind of support I need. I have that support now, through the community at the MMA club and a routine I’ve worked hard to establish for myself. For those struggling with mental health, getting help is so important, and really understanding what you need to get to and stay in a more positive place . . . it’s a superpower if you let it be.” 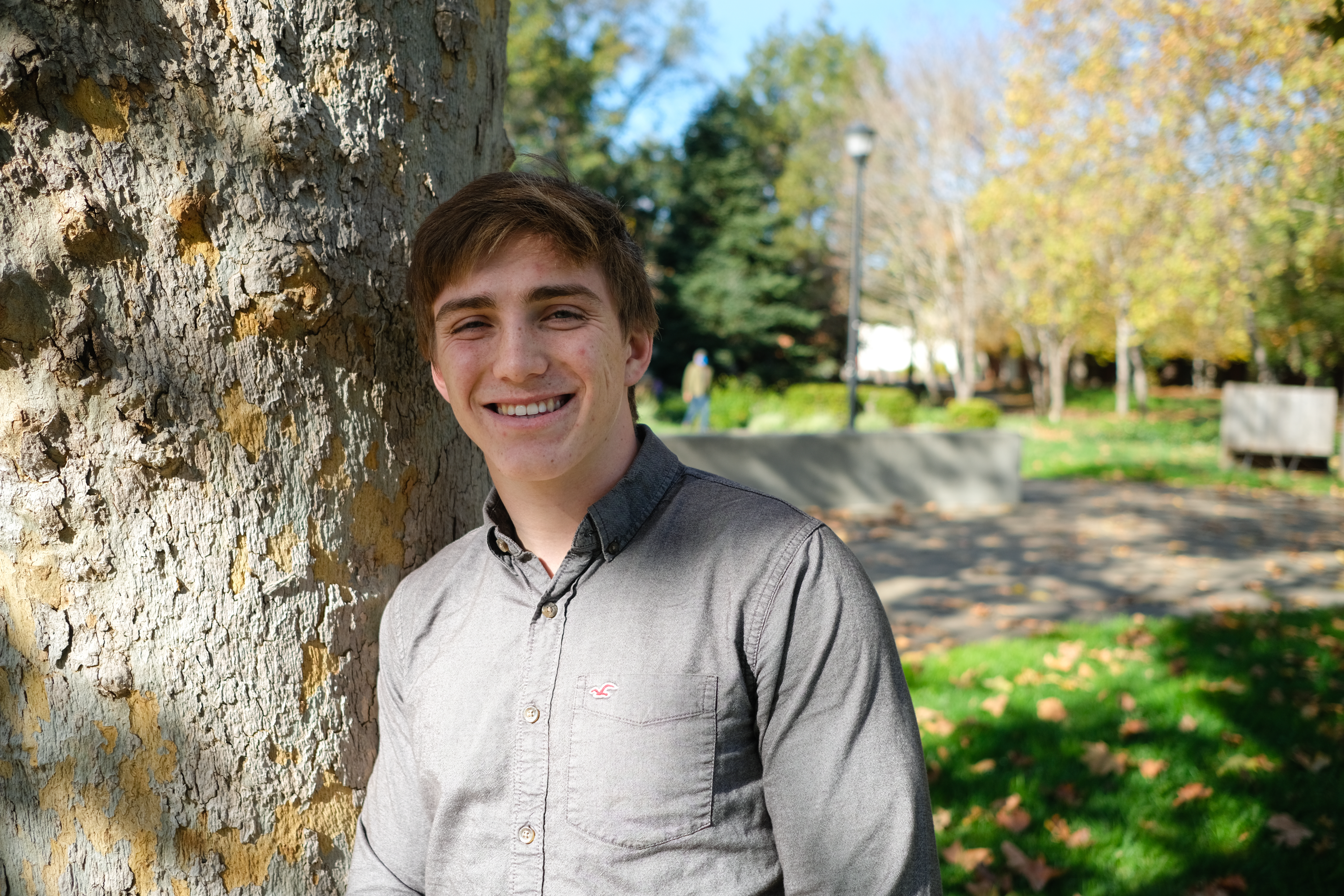 To learn more about the MMA at Sonoma State, follow the club on Instagram at @ssu.mma.club, or join the club on Engage through your SSU portal!