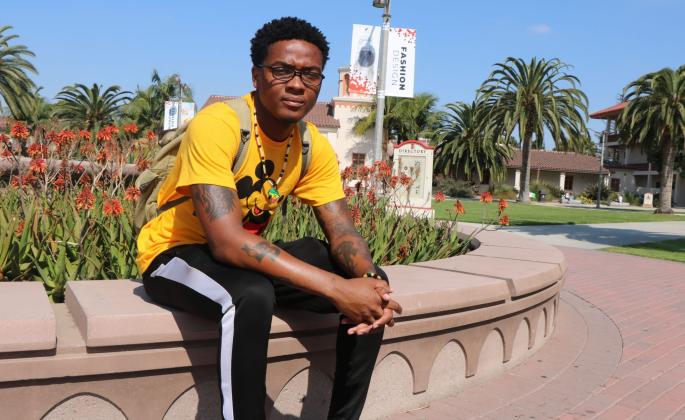 Elijah Harris can still remember the classroom at Hoover Middle School in Long Beach, California, in which he was told his future was limited. Room 202 was the school’s special education classroom, and the room to which Elijah was assigned after being diagnosed with Auditory Processing Disorder, a neurodevelopmental condition which made it difficult for him to recognize, interpret, and process information shared through speech. He spent much of his childhood in speech therapy, showing improvement along the way, but it was in room 202, at just 12 years old, that Elijah heard from his teachers that he had “reached his limit” with his education.

The cruelty was not new to Elijah, nor would it soon end. As a young Black student navigating a rare disability in a majority white public school, Elijah continued to face enormous challenges, discrimination, and barriers to his education. His middle school special education teacher would go on to tell Elijah that he was not likely to graduate from high school, stressing repeatedly that he had gone as far as his potential would allow.

This was consistent with what Elijah had experienced in elementary school. Just two years before, educators told nine-year-old Elijah that he was most likely to grow up to work at McDonald’s. It was, in fact, printed in the school yearbook, his photo shown juxtaposed alongside his white classmates who were deemed most likely to be scientists and artists, athletes and astronauts.

In the end, Elijah did go on to graduate high school — though just barely. The general lack of structural and individualized support throughout his school years made it excruciatingly hard for him to succeed. That lack of support was coupled with routine demonstrations of racism from classmates, teammates and coaches that left Elijah exhausted and demoralized.

After graduation, Elijah enrolled in Long Beach City College, a public community college, and quickly found he was not adequately prepared for the demands of higher education. He struggled to pass his classes. He continued to struggle to find the specialized support he so critically needed, and he continued to believe what former teachers had said about him — that he was not cut out for college. And so it was in January of 2015 that Elijah left school to enlist in the United States Army. 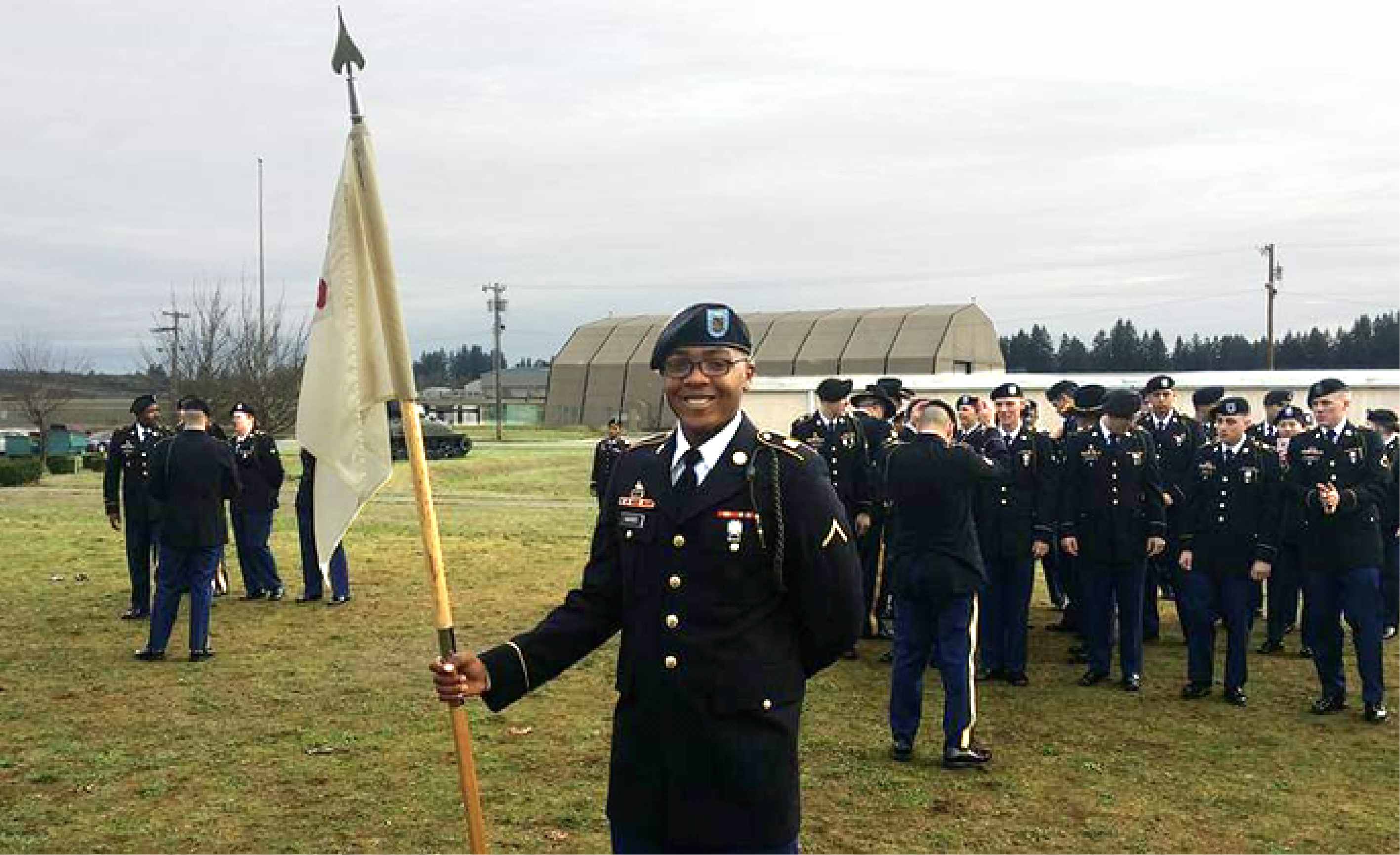 “That is when life really hit me,” Elijah said of his introduction to the military. “That’s when I really learned how life worked.”

As a new recruit private soldier, Elijah reported, as all privates do, to a captain. His particular captain, who was white, seemed to hone in on Elijah during his first days on the base, engaging in what soon became a pattern of increasingly ruthless bullying and routine harassment. Racial slurs and epithets were commonly used, joked about, and dismissed. And the strict chain of command left Elijah feeling that he was without recourse.

“I was told repeatedly that I needed to get over it,” he remembered solemnly. “I heard, ‘He’s a captain, you’re a private. You just have to take it.’ He took advantage of the chain of command. He singled me out day in and day out and I was in a position, in a system and culture, where I felt that I just had to live with it.”
In the lead up to the 2016 presidential election, Elijah’s base, like the country, grew increasingly divided. Suddenly confederate flags were on regular display. Soldiers in his division went out of their way to showcase their confederate flag tattoos and wear confederate flags on hats and t-shirts.

It continued with increasing fervor throughout the subsequent months and years. On Martin Luther King Jr. Day of 2018 Elijah reached a personal limit. A car parked on the base waved a confederate flag from its rooftop. The words “proud descendant of a confederate soldier” were boldly displayed across the back window. The scene — the confederate flag juxtaposed against the U.S. flag flying above the U.S. military base, the significance of MLK Jr. Day — hit Elijah hard. In this moment, he opted not to “just take it,” or to “live with it,” but to act, writing a note, signing it with his full name and unit number and leaving it on the soldier’s windshield.

“It was at that moment I really found my voice,” he said. “I was angry. The image upset me deeply. I wrote in the note that the flag was offensive and I explained why. And I included my name and unit number so he knew I was open to discussing the matter in person, that I wasn’t afraid.”

“He caught up with me that same day,” he continued. “He reported me. I got in trouble for insubordination. He ranked higher than me in the chain of command and my actions were considered inappropriate. But it didn’t matter. I felt for the first time in my life that I was becoming my own person. I knew after that interaction that I could stand up for myself.”

It was the beginning of a period of expansive self education. Elijah began reading — voraciously reading. He devoured the works of Black authors, activists, and thinkers from across the generations and around the globe. Frantz Fanon. James Baldwin. Ta-Nehisi Coates. Marcus Garvey. His readings, he said, opened new worlds of possibilities and perspectives. They gave him pride in his identity as a Black man and allowed him to see the community of Black men that existed beyond his immediate community. He drew support and confidence from them.

“I was developing my intellect, my identity, and my voice all at the same time,” he said of that period. “The Army made me open my eyes.” 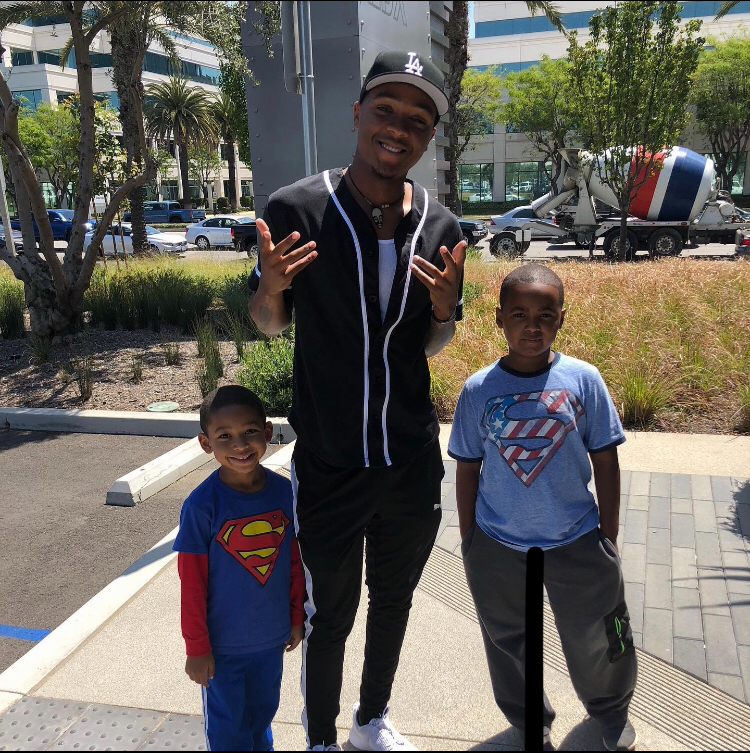 Elijah left the military in June of that same year and returned home to Long Beach. As he processed his military experience in the months that followed, he continued reading — “Lies my Teacher Told Me” by James W. Loewen, “Rest in Power” by Sybrina Fulton and Tracy Martin, “The Autobiography of Malcolm X,” and others. And soon it was that he had an epiphany: he wanted to provide to young students what had been denied to him during his school years. He wanted to nurture growth, to help young children develop a sense of self and pride in their identities, to create a community in which kids could see their own lived experiences reflected back through their instructors and feel supported in expressing their needs. He wanted to be a history teacher, and he wanted to return to school.

Elijah’s dad was a 1989 graduate of Sonoma State University and Elijah knew he wanted to follow in his footsteps, intrigued by the fulfilling fraternity life his dad had experienced in Omega Psi Phi. Founded at Howard University in 1911, the first fraternity founded on the campus of a Historically Black College, the organization places value on community organizing and philanthropic work – values Elijah reflected on as he prepared to apply to a four-year college for the first time.

He decided that he didn’t want to wait to be on campus to put those values into action, to live the fraternity mantra of “lifting as we climb.” Believing that change begins with children, Elijah took on a volunteer tutoring role at a local middle school. Staying busy, he realized, was good for his mental health and his transition back into civilian life. And, he had a growing desire to support the children who, like him, were struggling to succeed in Long Beach public schools.

“I wanted to help them find their voices,” he reflected. “In grade school, I didn’t feel that there was anyone who cared about me, that anyone was interested in what I thought, what I needed, what I wanted. And as a result, I stayed pretty quiet. When I was a tutor, my kids would say things like, ‘you’re one of the only people at this school who cares about our success.’ These were sixth graders, the same age I was when I was told I had reached my limit. My ability to help create safe spaces for them to learn and grow and use their voices is so important to me.”

Now a third year at Sonoma State and majoring in history, Elijah can’t wait to get back to the kids in Long Beach. But first, he says, he needs to continue his education.

“When I get my SSU degree, I know it’s not over,” he said, smiling. “I want to get my master’s. I started at a place where teachers were telling me I wouldn’t make it and now look where I am. It’s going to be a great day when I walk across that commencement stage. I will reflect back on the people who didn’t believe in me. And I will look forward to returning to that same school district as a teacher. I feel deeply grateful.”