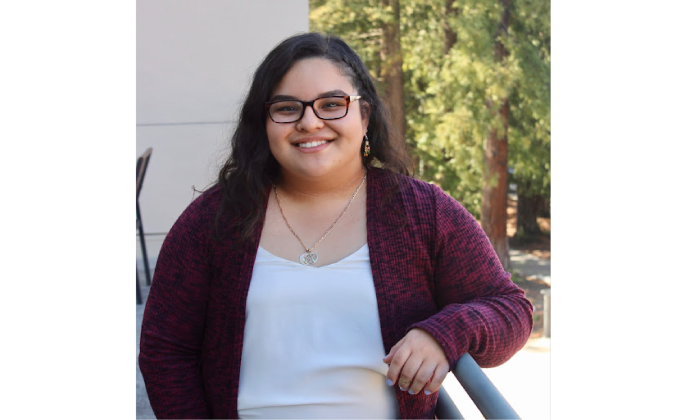 Like many first-generation college students, Briana Moreno Sanchez did not know what to expect from higher education. The child of immigrant parents, Briana spent most of her high school years believing that college was accessible only to those of financial means — a group to which she did not belong. Briana grew up in Richmond, California, where, she says, culture and tightly-held community was accompanied by unabating violence and deep poverty. She understood early on, just how hard her parents had to work to keep the family afloat. She saw the sacrifices made. She saw their fortitude in the face of mounting obstacles. Her father, who was often denied work because of a disability, would, in moments of desperation, collect used cardboard boxes to sell for change. When they had money to spend, Briana watched closely as her mother put the items she wanted back on the shelf so she could afford the items her children had placed in her cart. College, she figured, would not be part of her story.

That mindset remained until her junior year of high school when a particularly engaged and passionate high school counselor — Jessica Calderon of Richmond High — entered her life.

“It’s always the people who push you towards something different . . .” Briana remembered thoughtfully, trailing off in memory. “Ms. Calderon told me to take a chance, to go for it, see where I ended up. I thought, ‘Could I help my parents more with a college degree? Would I find something unexpected in the experience? What opportunities might I be able to take advantage of?’” She began touring local campuses, getting a sense of what could be. For the first time she started to think that it might be possible.

She didn’t tour Sonoma State, but that didn’t stop her from applying, or accepting her offer of admission. Something about SSU, she said, felt “meant to be.” Her financial aid package, which would cover nearly all expenses, sealed the deal.

In the beginning, there was nervous excitement, a giddy energy and eagerness to start this new chapter. And, there was doubt. Among the first in her family to enroll in college, she felt unsure of her academic decisions — was she making the best choice for her future, and the future of her family? Would her decisions set her up for success in her career? Thoughts of her family’s future weighed heavily, and she questioned herself constantly.

“First-generation college students and the children of immigrants tend to gravitate towards majors that make our parents proud,” she reflected. “I feel like I have to make my parents proud to make their sacrifices worth it. I came in as a biology major. It wasn’t for me, but I had in my mind that it was the right path, the best choice for my financial future, the major that would make my parents proud. I had to realize that yes, I want to make my parents proud, but I need to major in something I’m passionate about. I won’t succeed otherwise.”

It was with guidance from support staff in Sonoma State’s Educational Opportunity Program (EOP) — Khou Yang-Vigil, Andre Bailey, and others — that Briana understood not just how she could pivot to another course of study, but why that change might be beneficial to her academic and professional future. In the end, Briana’s passions led her to not one, but two new majors: psychology and women and gender studies.

"I had to realize that yes, I want to make my parents proud, but I need to major in something I’m passionate about. I won’t succeed otherwise.”

“Ever since I changed my major it has been up and up,” she said, laughing. “I couldn’t have made a better decision. I don’t know how I could have made it through without the support of EOP and my professors. Everyone at SSU is so understanding. Staff and faculty know that we are human. I won the lottery with the professors I’ve had.”

That support proved to be critical once again when, in early in 2020, Sonoma State transitioned to a remote learning environment amidst the onset of the pandemic. Briana moved home to Richmond where, not long after, COVID-19 made its way through the family house. Briana, her brother, and her parents all contracted the virus. Briana worried most for her father, who lives with asthma, but it was her mother who, early on, showed signs of an increasingly severe case. Terrified of being intubated, she resisted the hospital for days until she struggled to breathe to such a terrifying extent that her children made the decision that it was time to go.

The months that followed were a blur of visits to the intensive care unit, strange and sometimes awkward Zoom discussions as students and faculty adjusted to a virtual learning environment, illness and anxiety, confusion and grief. While battling COVID-19, Briana’s mother was put into a medically-induced coma, and subsequently suffered what appeared to be a stroke. Overcome with paralyzing fear and a deepening depression, Briana’s father weakened. He struggled to make decisions regarding his wife’s care, deferring instead to Briana and her sister. He refused to sleep in his own bed while his wife remained in the ICU. He struggled, through tears, to finish his sentences. In the family’s darkest moment, he failed to eat — the heartache was all consuming.

All the while, and in the same house, Briana persevered with her studies. When asked how she was able to focus on her classes, she acknowledged that it was no easy feat. She saw herself falling behind in her assignments, struggling to meet due dates. It felt an impossible task to balance the critical needs of her family with the demands of her academics.

“If it hadn’t been for my professors, I would not have passed,” she remembered solemnly. “I knew I had to tell them about my situation. When I did,  they extended deadlines, offered me the space I needed to take care of myself, gave me flexibility and options that allowed me to stay on track.”

She reflected further: “I think there is something uniquely supportive about Sonoma State. The faculty here really care. They make an effort to understand their students. They understand that we aren’t just students, that we are human beings with lots of things going on in our lives that can interrupt our studies.”

Briana’s mother spent nearly 10 months in hospitals, more than one month of which was spent in a coma, before she was sent to a rehabilitation facility for physical therapy and finally deemed well enough to return home. Her lungs, which were weakened before contracting COVID-19 from a preexisting condition, were fragile. She continued to cough, and her breathing was labored. But she was making progress, and would soon return home.

"I think there is something uniquely supportive about Sonoma State. The faculty here really care."

Briana, too, has made it through. She made the Dean’s List both semesters of the 2020-2021 academic year and plans to graduate at the end of this semester. Still, despite overcoming what often felt like insurmountable obstacles, she finds it difficult to credit her own resiliency, more often referring to the kindness and generosity of SSU faculty and staff.

“It’s weird to credit myself,” she said with a bashful smile. “But yeah, I did it. I have to acknowledge that. I got through it.”

She paused to wipe away tears before continuing: “I was doing it for me but I was also doing it for my parents. I drew so much strength from that. A big part of being resilient for me is remembering where I come from, and keeping in mind where I’m going. I’ve always had a goal to graduate, no matter what. This is all for them.”

Read additional "Profiles in Resilience" via the links below.