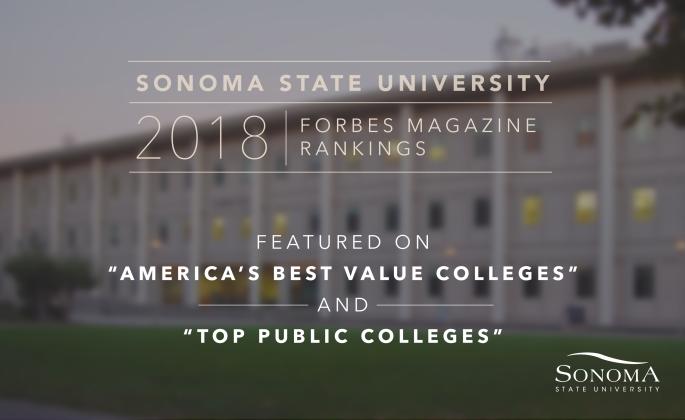 The campus this year came in No. 188 on the list, which ranks 300 colleges in the nation based on student return on investment. SSU was listed between Bucknell University (187) and Tulane University (189). The list, released on April 12, includes 16 other California State University campuses.

Sonoma State also was ranked among Forbes’ Top Public Colleges in the nation in 2017.

“This recognition is further evidence that Sonoma State is not just a distinguished institution for learning, it is an outstanding value for students,” said Sonoma State President Judy K. Sakaki.

Forbes revised its methodology for 2018 to put more emphasis on earnings, price and debt. The publication said it switched to including a focus on the net price of education, which takes into account the impact of students' financial aid and the costs of room and board.

CSU campuses are frequently recognized as engines of social mobility due to their success in educating diverse students, many of whom are the first in their families to attend college. SSU made CollegeNet’s 2017 list of schools that are leaders in helping students from low-income families attain degrees at affordable prices.

Sonoma State also has been ranked in Princeton Review's Top 382 Colleges in the nation for the past three years, including making the list for “Best Western Colleges" and “Best Dorms.” Along with this overall recognition, SSU’s programs have been recently rated highly as well with Sociology department being ranked No. 1 in the nation and Study Abroad Program ranked No. 5.

Sonoma State University has been named a top public university by U.S. News and World Report "Best Colleges" rankings. Sonoma State is ranked No. 11 on the report's Top...