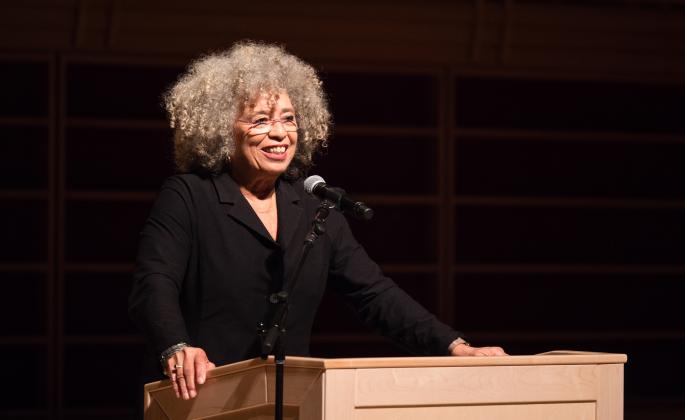 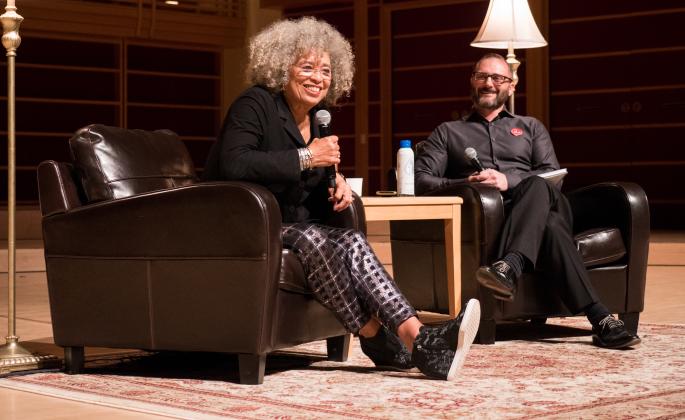 Davis and Women's and Gender Studies professor Don Romesburg engage in a Q&A with the audience. 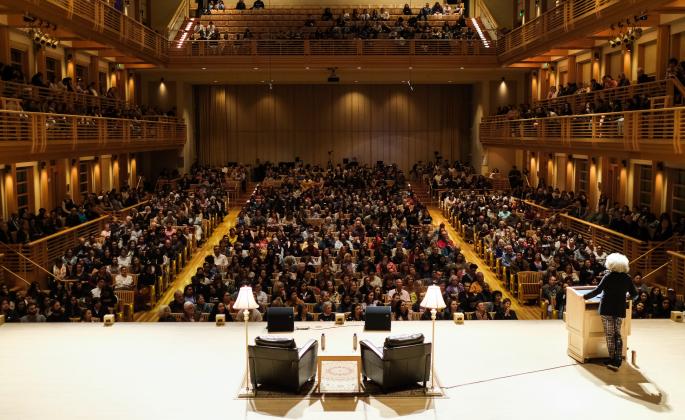 Davis speaks in front of a sold-out crowd at the Green Music Center. 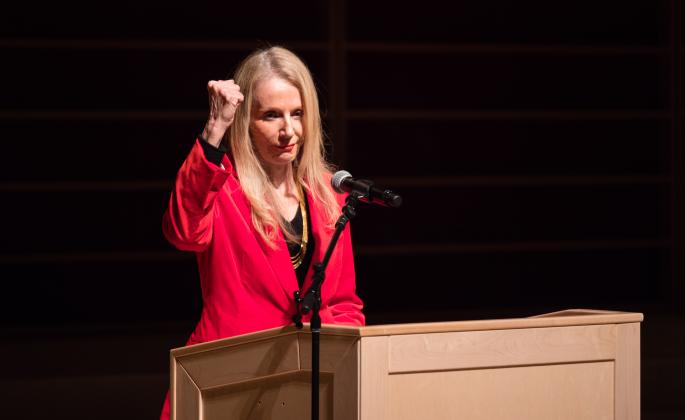 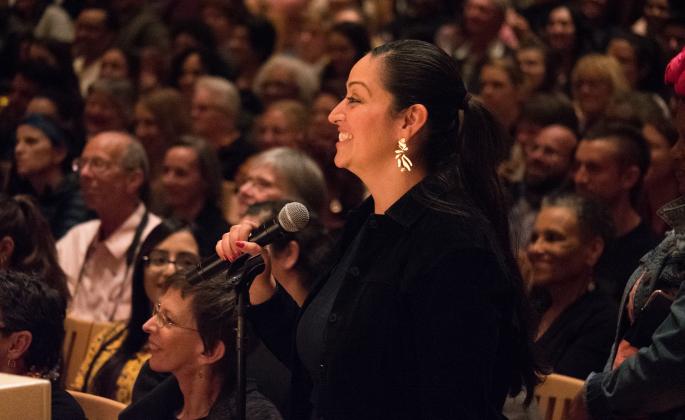 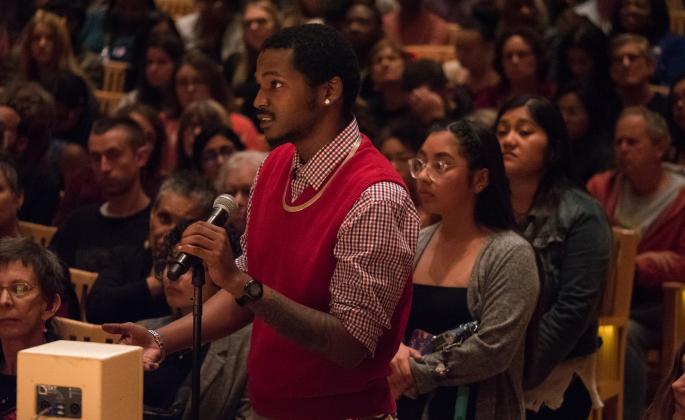 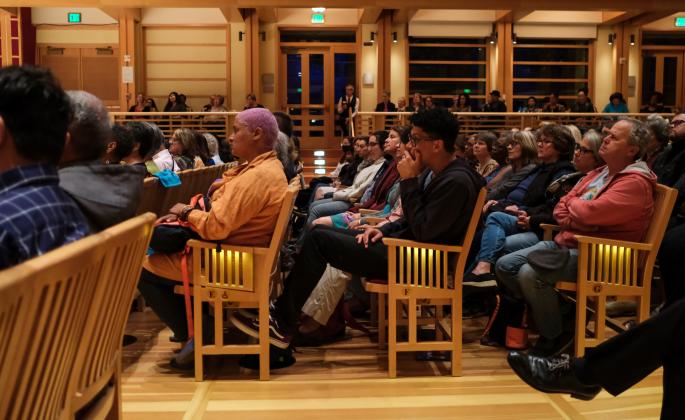 The audience listens as Davis begins her lecture. 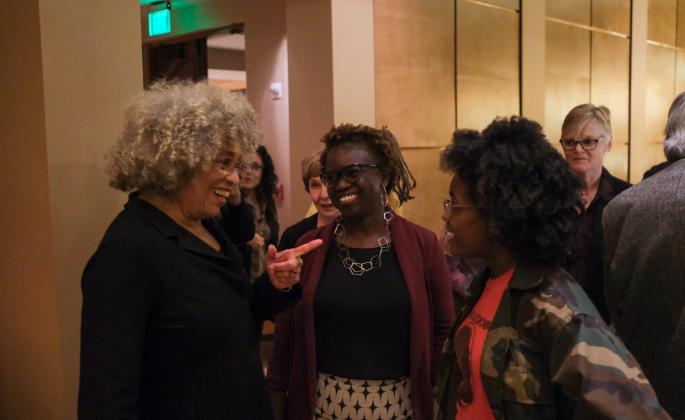 Davis interacts with audience members at a reception following the lecture. 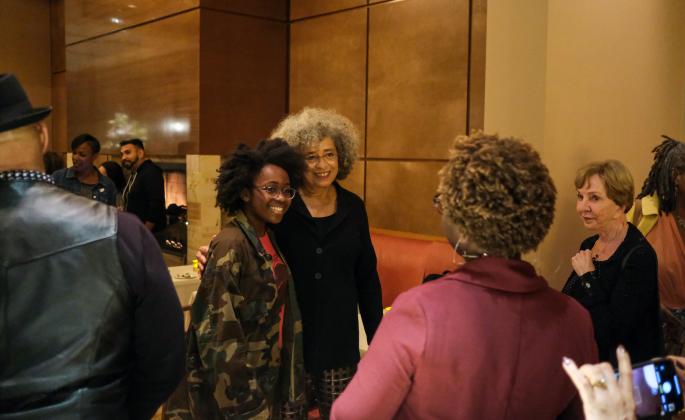 Davis poses with an audience member at a reception following the lecture. 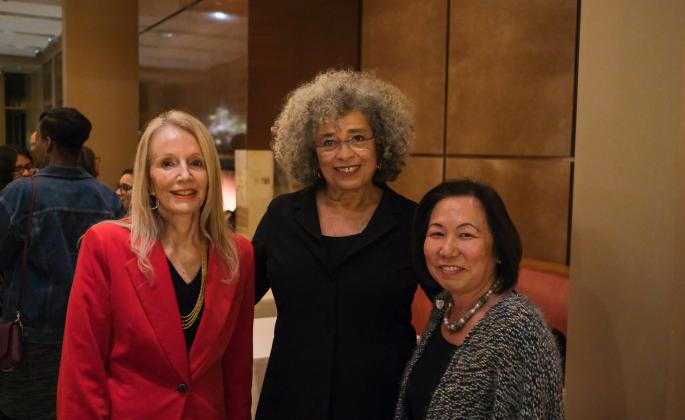 Angela Davis is no stranger to having people listen when she speaks. The political activist, author and former educator brought her ideas about economic, racial and gender injustice to a sold-out crowd at the Green Music Center on March 3 as part of the 15th H. Andréa Neves and Barton Evans Social Justice Lecture Series.

Davis gave an empowered lecture on injustice and oppressed groups around the world, tying in how her own experiences during the civil rights movement and her time behind bars shaped her views today. However, Davis said the purpose of her speech was to encourage those at Sonoma State and surrounding communities to participate in social justice struggles.

In 1970, she was prosecuted for three capital felonies related to firearms that were registered in her name. The weapons had been used in a homicide case. After more than a year in jail, she was acquitted of the charges in 1972. She then continued on with her academic work and her domestic activism and, during the 1980s, served as professor of ethnic studies at San Francisco State University. She also taught courses at the University of California, Santa Cruz until she retired in 2008. She earned her Ph.D. at Humboldt University of Berlin.

“History is made by ordinary people when they join together,” said Davis. “There is educational value in engaging in community practices. We organize and form movements and transform our powerless selves into a great collective one.”

As part of Sonoma State’s Social Justice Week, “An Evening with Angela Davis,” featured a lecture from Davis followed by a Q&A with Women’s and Gender Studies professor Don Romesburg, who also teaches a class this semester revolving around the work of Davis.

“We need opportunities like Social Justice Week to retell and share our stories so that we can continue to learn and grow so that we can see ourselves in each other,” said President Judy K. Sakaki during her opening remarks. “We are all unique, but we are not so different.”

To learn more about other events as part of Social Justice Week, visit the story at SSU News.