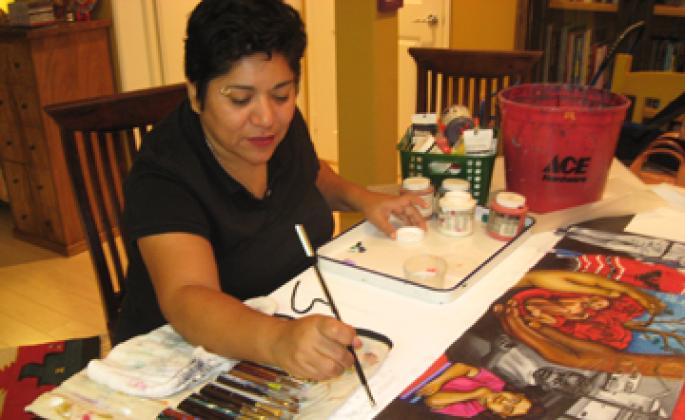 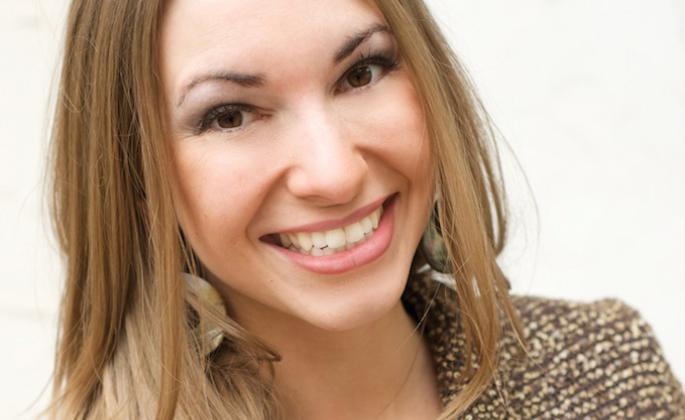 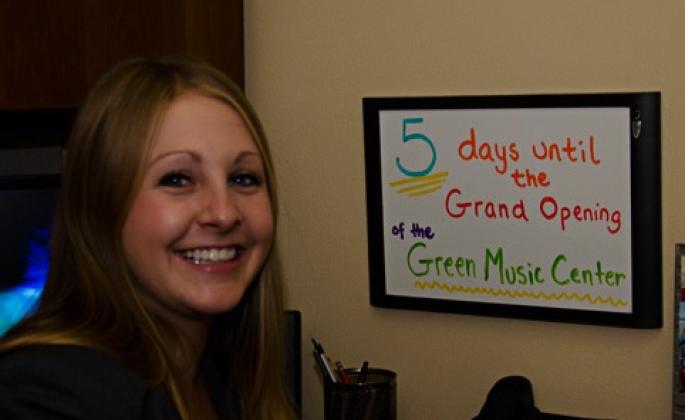 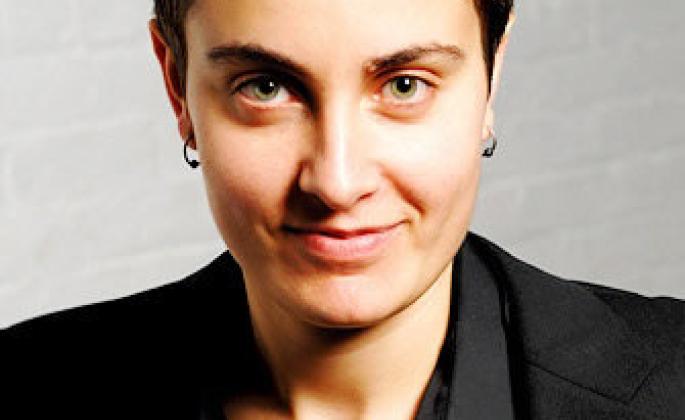 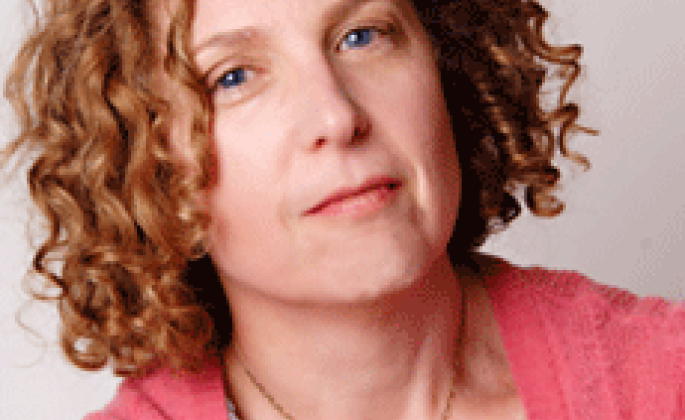 The theme brings a range of compelling and thought-provoking speakers, films and lecturers to the campus community.

It is in the spirit of recognizing women's contributions to science that the SSU Library is celebrating with Women in the Sciences, a three-part lecture series where female scientists - biologists, chemists, physicists and engineers - from campus and the community share their contributions, role models, and the pull of science in their lives.

In the art exhibition on view in the Library Art Gallery, entitled XX: Women, Art, & Science, six women, all Bay Area artists, present work that typifies their explorations into the scientific world.

The exhibition characterizes each artists' unique vision and showcases a wide range of works from prints to paintings to sculpture created from such diverse materials as ink, acrylic, mixed media, rubber, and thread.

Some of the other can't-miss events for the month include writer/author Peggy Orenstein on March 20 with  From Princesses to Pop Tarts: What the New Culture of Girlhood Means for Girls.

Jennifer Siebel Newsom brings Miss Representation to campus on March 21, a film that exposes how mainstream media contributes to the under-representation of women in positions of power and influence in America and makes it difficult for women to achieve leadership positions.

Repeat favorite - The Vagina Monologues - is back with multiple performances from March 8-10.

March 1, Thursday, noon. "Women's Education /Women's Empowerment" by Janet Hess. Hess, Associate Professor of African Studies/Art History in the Hutchins School of Liberal Studies, addresses representations and constructions of gender, in her course "Barbies," She is on the Faculty Advisory Board to the Multicultural Center and the Faculty Senate and is the co-chair of the Women's Caucus and advisor to the student group, F.I.S.T. Multicultural Center.

March 2, Friday, 7 p.m. and March 4, Sunday 4 p.m. Le Bonheaur ("Happiness"). Agnès Varda's third feature is a cheerful, sunny, colorful film, about love, fidelity and the search for happiness, all of it scored with the richly emotional music of Mozart.(1964, 82 min., in French with English subtitles). $6 general admission, $5 for non-SSU students and senior citizens, and $4 for SFI members and children under 12. Free for SSU students. Warren Auditorium, Ives Hall. www.sonoma.edu/sfi.

March 6, Tuesday, 4 p.m. New Year Baby with Socheata Poeuv. Poeuv embarks on an emotional journey with her parents to their homeland, retracing the family's path and picking up lost pieces of her history along the way. Using animation to illustrate family memories and Cambodian history, the film intertwines the stories of Poeuv's parents with those of millions of others who suffered under the Khmer Rouge. Following the film, director and actress Socheata Poeuv will speak and answer questions about her film. Presented in collaboration with the Holocaust Lecture Series. Free. Ives 101.

March 7, Wednesday 8 p.m. Shattering the Silence of Sexual Violence with Angela Rose. At the age of 17, Angela Rose was abducted at knifepoint outside a suburban shopping mall and assaulted by a repeat sex-offender who was on parole for murder. After being released by her attacker, she then suffered at the hands of authorities who subjected her to blame and additional victimization. Transformed into one of the nation's most passionate and effective advocates for the prevention of sexual violence, Rose has lobbied for laws for victims and has promoted the importance of education on issues surrounding sexual violence. Free. Main Gym.

March 8, Thursday Noon-1 p.m. Alma López, MFA. Born in Los Mochis, Sinaloa and raised in East Los Angeles, Alma López has exhibited her work in museums and community organizations all over California, the nation, and internationally. Through her work, her activism, and her popular website, López is one of the most visible and cutting-edge Chicana feminist activist artists in the country. Part of the Queer Lecture Series. Stevenson 1002.

March 14, Wednesday 7 p.m.  My So-Called Enemy, with Lisa Gossels. This rare film about Arab-Israeli coexistence goes far beyond documenting a one-time encounter at a peace camp. It follows six of its compelling subjects for seven years to reveal the way the young women's attitudes and relationships are tested as they mature and as the conflict deepens. Discussion to follow film. Free. Ives 101.

March 14-16, Wednesday-Friday. Tunnel of Oppression. Gives participants the opportunity to see, touch, hear, and feel the realities of oppression as a stepping stone toward creating diversity awareness. The experience lasts 45 minutes. Each part of the tour portrays a different example of how oppression impacts various under-represented groups, i.e. race, gender, social class, religion, disability, etc. Based off the Museum of Tolerance in L.A. SSU joins the many campuses across the nation who have constructed their own Tunnels of Oppression. Tuesday, March 13, 5 -8 p.m.; Wednesday &Thursday, March 14/15, 11 a.m.-8 p.m.; Friday, March 16, 10-noon. Student Union Multi-purpose Room.

March 19, Monday 7:30 p.m. Oblivious to Everyone, with Jessica Lynn Johnson. This award winning, internationally touring solo show written and performed by this published playwright explores the media's influence on American society. Johnson portrays a slew of characters of different age, sex, and race as a means to examine the influential stereotypes, prejudices, and pressures prevalent in American media. For more information, visit www.jessicalynnjohnson.com. Free. Ives 101.

March 20, Tuesday 7 p.m. From Princesses to Pop Tarts: What the New Culture of Girlhood Means for Girls, with Peggy Orenstein, writer/journalist. Orenstein wrote School Girls: Young Women, Self Esteem and the Confidence Gap, Waiting for Daisy, and her newest, Cinderella Ate My Daughter. Visit http://peggyorenstein.com for more information. Free to students. Commons.

March 21, Wednesday 7 p.m.  Miss Representation, written and directed by Jennifer Siebel Newsom, exposes how mainstream media contributes to the under-representation of women in positions of power and influence in America. The film challenges the media's limited and often disparaging portrayals of women and girls, which make it difficult for women to achieve leadership positions. Free. Ives 101.

March 22, Thursday Noon-1 p.m. Juno Obedin-Maliver, M.D., M.P.H. Obedin-Maliver, a resident physician in obstetrics and gynecology at UCSF, has a long-standing dedication to social justice issues in the United States and abroad. Her current work is focused on promoting health for women and LGBT people. She is a founding member of the Stanford Lesbian, Gay, Bisexual, and Transgender Medical Education Research Group (LGBT MERG). Part of the Queer Lecture Series. Stevenson 1002.

As the calendar flips to March, Sonoma State University celebrates women throughout history who have stood up to make a difference. There are several events around campus this month that offer exciting opportunities to learn about and experience some of the obstacles women face throughout their...