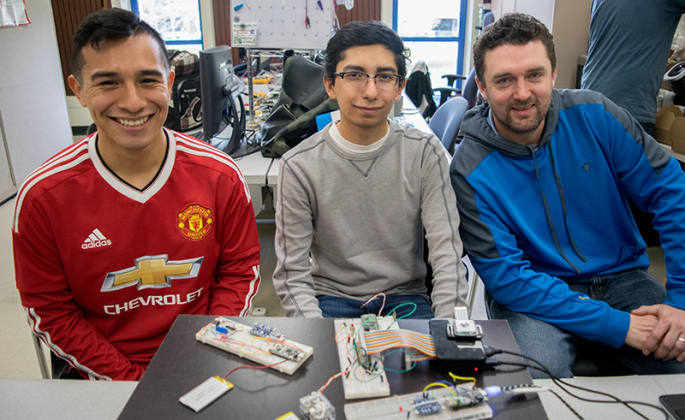 "The most important thing about this project is it could save my wife from a potentially horrible accident," says Art Obuchowicz, who partnered with the group after a meeting with Sonoma State Engineering Science Department Chair Farid Farahmand.

Obuchowicz, who owns an appliance repair business in Santa Rosa, says he sometimes takes time off work to stay home if his wife feels a seizure may happen that day. She wears a helmet and back protection, but those safety measures alone aren't enough to prevent a fire should a seizure hit at the wrong moment, like when she's using the stove.

The device is a Fitbit-like bracelet that will be able to detect seizures, send alerts to a caregiver and shut off appliances like an oven or stove. Some seizures can last several minutes, with effects felt for hours after.

Each year at least 200,000 people are diagnosed with epilepsy. It affects more people than multiple sclerosis, cerebral palsy, muscular dystrophy and Parkinson's combined, yet receives fewer federal dollars per patient than each of these.

"There's no cure for her type of epilepsy, but we keep searching," says Obuchowicz. "This device is about surviving."

Last year, a customer who happened to be an electrical engineer connected Obuchowicz to Farahmand, who introduced him to a student group searching for a senior project that they could be passionate about. Soon after, the project was born.

"Working with wearable sensors is really interesting, and I enjoy working on a device that is actually helpful," says Aaron Marquez, team leader of the group, which also includes students Jaime Ciriaco and Michael Dunn.

In addition to being helpful, the project could also be quite lucrative. The medical wearable device industry is booming, with the global market projected to reach $4.5 billion by 2020. Obuchowicz says he would love to take the product to market if it proves successful enough to do so.

The team is putting the finishing touches on the bracelet, including fine-tuning the seizure detection algorithm and improving its wifi and radio communication. A prototype is expected to be ready for beta testing in May.

Obuchowicz is pleased with the group's engagement with the project. "I asked them why they are doing this project and they told me its because they care about people," he says. "I have great respect for them that they agreed to do my project. I'm so happy."

Geology Professor Matthew James has has been elected a Governing Member of the General Assembly of the Charles Darwin Foundation for the Galapagos Islands (CDF), an international group of scientists, conservationists, and policy makers that provides scientific research and technical information...