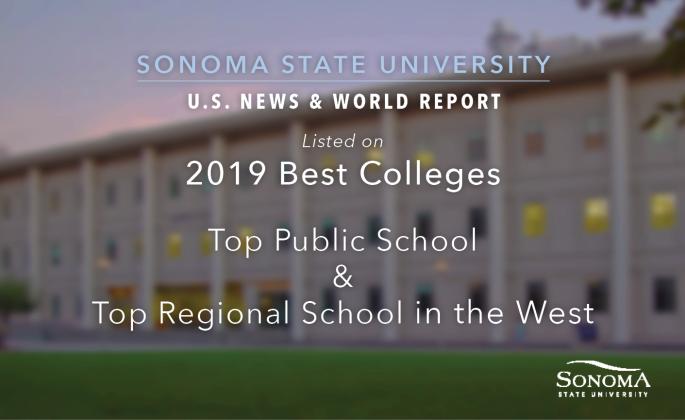 Sonoma State University has once again received recognition for being one of the top public institutions for higher education in the West. This week, the U.S. News and World Report released its “2019 Best Colleges” rankings, which placed Sonoma State as No. 19 on its list of “Top Public Schools” and No. 64 overall for college and universities in the Western Region.

For its Best College rankings, U.S. News and World Report analyzes various student outcomes such as graduation and retention rates and social mobility. However this year, U.S. News said it altered its methodology to put greater emphasis on measuring how well schools support low-income students through graduation. For example, U.S. News incorporated such factors as the graduation rates of students who receive federal Pell Grants and the differences in graduate rates of Pell Grant students versus non-Pell Grant recipients. U.S. News also announced that it had eliminated college acceptance rates as a factor in its “Best College” rankings. Dropping the acceptance rate, which previously had a weight of just 1.25 percent, allows the rankings system “to give more weight to outcome measures,” according to U.S. News.

"A university is not successful if it does not graduate its students, which is why the Best Colleges rankings place the greatest value on outcomes, including graduation and retention rates," said Robert Morse, chief data strategist at U.S. News. "By including social mobility indicators, U.S. News is further recognizing colleges that serve all of their students, regardless of economic status."

Other factors used in their ranking system include faculty resources, the expert opinion from peer assessment, alumni giving and overall financial resources of the university.

"Being included in this ranking is a reflection of our focus on the academic success of our students, especially those who come from economically challenged backgrounds and are the first in their families to attend college," said Sonoma State President Judy Sakaki. "I couldn't be more proud of the direction we are headed."

These rankings come on the heels of the university being named in August as one of the nation’s Top Schools by Forbes Magazine. Under the “top college” listings released by Forbes on Aug. 21, SSU was ranked No. 88 in the West and No. 150 among public colleges in the nation.

Sonoma State also was ranked highly by U.S. News and...