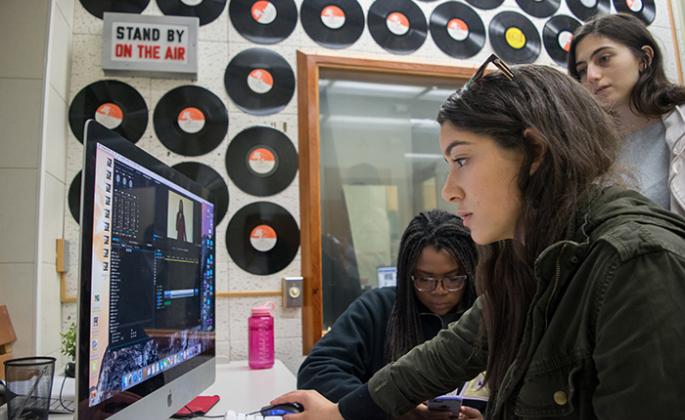 With the massive shift in the communications industry over the past decade, media-savvy Communications Studies students at Sonoma State University are adapting to the new digital broadcast landscape by producing content exclusively for the internet.

About 35 students produce news stories, sit-down interviews, instructional videos, and even short films for Studio Blue, previously known as SSU-TV. A former professional news anchor himself, Sonoma State Communications Professor Ed Beebout is well aware of how trends have shifted toward the internet. "The fundamentals are the same," says Beebout. "We're still producing news and public interest stories, but we're increasing and emphasizing our online presence."

In the early days of SSU-TV, the content was produced exclusively for broadcast for on-campus viewing in student housing. But now Studio Blue's content is posted exclusively to YouTube and social media sites like Twitter and Instagram. This has been a conscious decision by Beebout and Studio Blue student management to make content more accessible to a larger audience.

Students also produce a live broadcast twice per month. Though the audience may be small in these early stages, students are held to a high standard and expected to be professional and prepared. Students from the class have gone on to produce their own films, and multiple student groups have earned awards at film festivals and been invited to show their short films at the Cannes Film Festival in France.

The trend in television broadcast is leaning toward online content. Shares of the cable giant Viacom have lost 47 percent of their value in the past two years, and streaming services like Netflix, Hulu and Amazon are thriving with their own award-winning shows and films. News networks are targeting the younger demographic by making their broadcasts available on apps, and nearly every news network now has a Twitter or Instagram account. Some, like CNN and the Washington Post, have even collaborated with Snapchat to make their content more accessible.

Studio Blue equips students with the basic skills needed to be successful in this field, whether they want to pursue news, film, TV, or even produce their own content for YouTube. Students learn to edit, film, script, and produce news, short films, and other segments. While much of the content is lighthearted or comedic, students have produced drama and hard news stories.