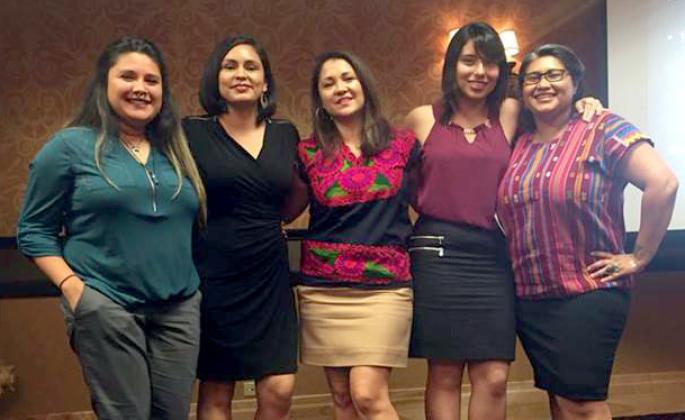 A group of Sonoma State University students were recognized for their accomplishments after participating in a panel at the National Association for Chicana and Chicano Studies (NACCS) conference in Denver this April.

Griselda Madrigal Lara was awarded Immigrant Student BECA, which is given to current undocumented immigrant students committed to furthering the well being of Chicanas and Chicanos. It is the first time students from Sonoma State have received this award.

"Each of them presented something in the area of education or ethnic studies and frankly, their work was excellent," says Lopez. "They stood to applause during the conference luncheon. I was with them at the table, and very proud to be among them."

Yolanda Ayala has already started putting her studies into practice, working with Napa nonprofit Puertas Abiertas (Open Doors). The organization works hand in hand with Latinos to inspire and achieve healthy living, self-sufficiency, and opportunities for leadership and community engagement.

"These students are coming out of the tradition of grassroots education reform," says Lopez. "They are doing real research in the community, and already implanting their ideas."

Ethnic studies, a relatively recent college major, has been increasing in popularity in places with high Latino populations, especially California and Texas, says Lopez. "These students are doing empirical research that's being implemented. It puts Sonoma State on the map in terms of education reform."

Bring your lunch and come hear James Joseph Dean, Sociology, speak on his work "From 'Normal' to Heterosexual: The Historical Construction of Heterosexual Masculinities and Heterosexual Femininities" at the School of Social Sciences Brown Bag Tuesday, Feb. 28, Noon - 1p.m. in Stev 2011.

Christina Baker, Assistant Professor of American Multicultural Studies, discusses the persisting stereotypes faced by African-American actresses in the film industry with Jack Hanson of Comcast Newsmakers. As the Oscar nominations rollout, she notes the nod goes in 2012 to two...