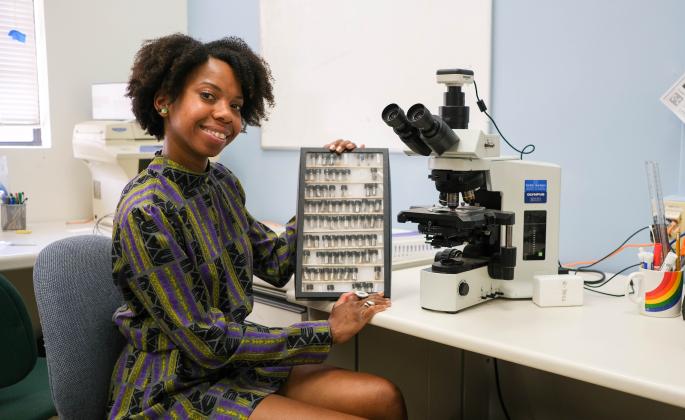 (Rohnert Park, CA) — Sonoma State master’s student Doshia Dodd has always had a deeply instilled love of learning from her father, but her path to higher education was not smooth. A first-generation college student, she initially struggled in her undergraduate studies when she attended Chico State in 2006. Dodd dropped out after two years of study but eventually found her way to SSU in 2014, where she graduated with a degree in Anthropology in 2016.

During her first semester of graduate study at SSU in spring 2020, the COVID-19 pandemic hit, and her husband had to work on the front lines as a lead nurse of the COVID unit at Santa Rosa’s Memorial Hospital. Even so, Doshia remained focused and distinguished herself as a model student in Sonoma State's Cultural Resources Management Master's program, undertaking innovative and original research on Native Californian plant utilization.

In acknowledgment of her talent, determination, and drive, Dodd was recognized today at a CSU Board of Trustees virtual meeting as one of 23 Trustees’ Award recipients. The award is the California State University’s highest recognition of student achievement, selected by the Board upon President Sakaki’s recommendation.

“Doshia’s hard work, perseverance, and academic excellence represent what it means to be a part of the Sonoma State community,” said President Judy K. Sakaki. “The remarkable research she has conducted thus far and her future goals are a testament to her resolve and the guidance of our dedicated faculty at SSU.”

Dodd’s professional goal is to become an archaeobotanist and manage a lab that focuses on recovering, identifying, and analyzing botanical remains from archaeological sites.​

“This scholarship means the world to me,” said Dodd. “It means that I do not have to take a gap year due to lack of financial resources. I am extremely proud and eternally grateful to Sonoma State University and the Donors of this scholarship. It has given me financial support to achieve my childhood goal of being the first person in my family to obtain a Master’s Degree.”

There are multiple donor-funded scholarships awardees can receive, each given to recognize a student’s superior academic performance, personal accomplishments, community service, and financial needs.

The Board of Trustees has bestowed Dodd the prestigious recognition as a Sycuan Band of the Kumeyaay Nation scholar. The Sycuan Band is one of thirteen Kumeyaay tribes, each a sovereign nation with its own federally established reservation. The Kumeyaay people have had territory in California and beyond for the past 12,000 years. Today, mindful of their rich ancestral past, the self-reliant members of Sycuan are planning and working diligently to benefit future generations.

Along with representing SSU in the 35th Annual CSU Student Research Competition, Dodd is a Lambda Alpha National Anthropological Honors Society member, volunteers as a mentor for SSU's Umoja Queens Black women mentorship groups, and is a founding member of the SSU's School of Social Science Social Justice committee.

More than 400 students have been honored with the Trustees' Award since the CSU established the scholarship program in 1984. To learn more about the award, past winners, and Doshia Dodd, visit the CSU.