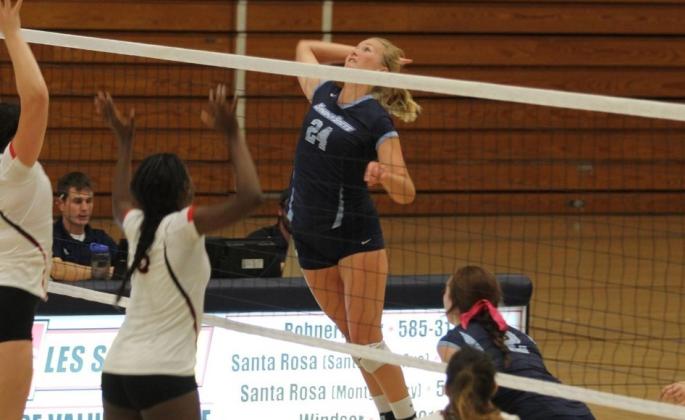 The Sonoma State women's soccer team surrendered its first goal in over a month late in the match, but held on for the 2-1 victory over host Cal Poly Pomona on the final day of the regular season, Oct. 31. The No. 9 Seawolves will head into next weekend's CCAA tournament semifinal with a 13-1-3 overall record and an unbeaten 10-0-2 mark in conference play.

Alex Sifuentes scored her fourth goal of the season in the 37th minute and that's all the ninth-ranked Sonoma State women's soccer team would need to knock off host Cal State San Bernardino 1-0 on Oct. 29 at Coyote Premier Field. It was also goalkeeper Ashley Luis' 13th shutout of the season, a new SSU single-season record.

The Sonoma State men's soccer team suffered a 5-0 loss at Cal Poly Pomona on the final day of the regular season, Oct. 31, but the Seawolves (10-6-2, 6-5-1 CCAA) finished fifth in the conference standings and will be the No. 5 seed in the 2015 CCAA Championship Tournament, facing No. 4 seed Stanislaus State on Tuesday, Nov. 3 at 7 p.m. at Warrior Stadium in Turlock.

TJ Perez buried a shot into the back of the net in the 106th minute to lift the Sonoma State men's soccer team to a 2-1 victory in double overtime on Oct. 29 against Cal State Bernardino, securing the Seawolves (10-5-2, 6-4-1 CCAA) a spot in the upcoming CCAA Championship Tournament for the second time in three seasons.

Freshman Kim Savio finished with 13 points and nine rebounds, and sophomore Madison Burroughs added nine points, but the Sonoma State women's basketball team lost 84-61 to host San Jose State in exhibition action on Nov. 1 at the Event Center in San Jose. The Seawolves will play one more exhibition game on Nov. 7 at Pacific before opening the regular season on Nov. 13 against Holy Names as part of the CCAA/PacWest Challenge in Chico.

Sullivan Roche earned a victory in the Flight C Quarterfinals over Saint Mary's Brian Lee and newcomer Travis Lynds knocked off Nevada's David Pantell in the same quarterfinal, but those would be the only wins for the Sonoma State men's tennis team at the Pacific Tigers Invitational on Nov. 1 in Stockton. The Seawolves, who went 2-13 in singles play and 1-7 in doubles, will return to action on Jan. 16th at NCAA Division I Santa Clara.