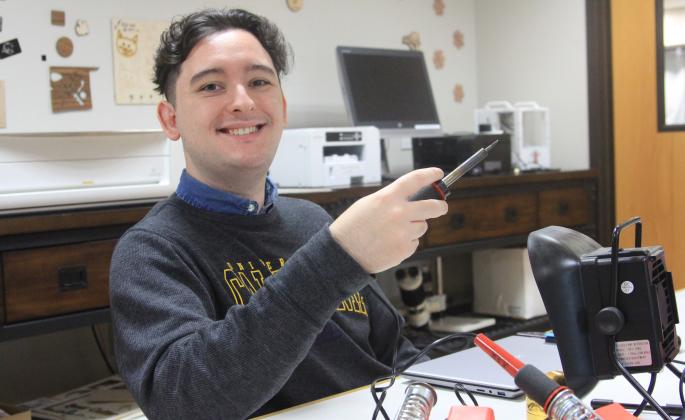 It may have been while staring at gummy bears in kindergarten when Alex Vasquez realized his path was destined to be different than most. While other kids in his Novato elementary school were doing one-to-one counting with gummy bears, Alex was already working on square roots and multiplication tables. At the same time, five-year-old Alex was still learning how to compose sentences and words, as he struggled with verbal communications and severe social anxiety.

His mother, Rose, a teacher, educated in developmental psychology and experienced in working with children with disabilities, helped seek an early diagnosis of autism for Alex. With a supportive family and network of a homeschool community in Sonoma County, Alex excelled in academics – to the point where a 13-year-old Alex had to enroll at Santa Rosa Junior College to match his formidable math skills.

The academic accolades continue to add up. Alex, who recently turned 25, graduated last year from SSU with a degree in Physics and is now a graduate student in the Physics & Astronomy department at UC Irvine.  More recently, Alex won a National Science Foundation graduate research fellowship – becoming only the second SSU physics graduate in the Department’s history to receive that prestigious award. Alex’s story also inspired a $5.5 million NASA program aimed at helping autistic students that was created by his SSU Physics and Astronomy professor Dr. Lynn Cominsky.

“Alex really opened my eyes to the possibilities that working with autistic learners can offer. Through the opportunities presented by NASA’s Neurodiversity Network, I wanted to demonstrate that although Alex has amazing abilities in physics, mathematics and engineering design, he is not unique. There are many other autistic learners that can excel in college and who dream to someday work for NASA. NASA’s Neurodiversity Network provides opportunities and support to autistic high school students to  work with real NASA scientists and engineers, and we are creating life changing experiences for many of our interns, ” said Dr. Lynn Cominsky. Learn more about SSU’s N3 internship program here.

We caught up with Alex Vasquez to learn more about his journey from SSU to UCI and what he hopes the stars have planned for him.

You have an inspiring quote: “One of the most important things for me is the ability to focus on my strengths and interests, not my challenges.”  When did you have that realization?

That came up early on during homeschooling. I’m very good at mathematics, physics, and want to devour as much of that as possible. With the things that I’m not so strong at – like public speaking and talking to people, I prefer to do those at my own pace, rather than being forced and then have stress and anxiety that might interfere with things that I’m passionate about and interested in.

What are you most passionate about and interested in?

Physics and space sciences! At SSU,I majored in physics with a concentration of astrophysics, and a minor in math. At UC Irvine, where I'm currently in graduate school, I am in the ChAMP program, which is a cross-disciplinary program with chemistry and material science and physics.  I want to combine my material science and interest in astrophysics by working on solar panels.

When is the first time you heard that term, “autism,” and understood what it meant?

Probably around age three. That's when I got my first official diagnosis. But when I first understood what it means to be autistic was probably around age five or six. I was still in public school at the time. I was essentially going through a speech therapy program and talking with various school psychologists having… um! How do I properly describe it?  Essentially, programs to help improve my behavior. Because, when you're young with autism, you have trouble with emotional regulation. This very much comes up during things like board games.  We played a lot of board games like Candy Land and (Alex laughs) it always irked me because (A) they had these very dumb rules like, oh, you can only win in the game with Candy Land or Snakes and Ladders if you roll the exact numbers that land on the final spot, which just makes it completely random. You go for the entire game, get to that end point and just lose because you kept rolling the wrong number. Also, for the positive reinforcement, they gave you licorice. And, I'm not sure what your position is, but no one I know likes licorice. Unless maybe you’re in a movie theater. When someone offers you candy, you're not going to say,  “Oh, can you get me a Red Vine?” This is not a dig at Red Vines, but, come on, no one asks for Red Vines!

Let's talk about your academic journey. Your higher ed started at Santa Rosa Junior College at age 13. What was that like?

That experience was odd!  After homeschooling I took the math placement exam at 13, and started in the fall quarter 2011. SRJC essentially became my high school. At first, I was too socially nervous and anxious, and not good enough at communication to even order a muffin there. Apparently, my mom had conspired with the cafe staff to essentially socially script, the process of me getting a muffin. They were even looking out for me back then, but I wasn't aware of that.  They were very supportive, and it was very helpful. I went through the entire math program. Thought, that was interesting. How do I apply this? Decided to apply it by doing all the physics classes there. Got to the end of that and thought, well how do I apply this? I did the same thing with engineering and the same thing with machine-tool technology… because I wanted to know mechanics and how the assembly process worked. I want to go to NASA. I wanted to design and build rockets. I eventually narrowed it down to astronomy. I also went through all the required courses at SRJC, so, when I got to SSU, I only had to focus on math and physics.

What subjects are the hardest for you?

This is going to sound weird because it's not public speaking. I had the most fantastic public speaking teacher, Prof. Hal Sanford, and I really enjoyed that class. I think it contributes to why I'm so comfortable speaking at conferences now.  There was a differential equations STEM class at SRJC, which was very high-level mathematics. I did get help from another homeschool student, Sarah Muehleck, who helped me a lot.

How has SSU helped you in your journey? Do you have a favorite memory here?

SSU has been an incredibly helpful and safe environment for me to develop my physics and academic skills, especially the Physics and Astronomy Department. I’ve had wonderful mentors and overall, it's been a fantastic time here. My favorite SSU memory is having been able to work with both the Education and Public Outreach and the EdgeCube Satellite teams. Being able to work with these incredible teams, including having the mentorship of Dr. Lynn Cominsky and Dr. Garrett Jernigan, I simply would not be where I am now without them, and can't thank them enough.

What made you choose UC Irvine?

One of my friends in the homeschool community, his grandfather is Dr. Kenneth Ford, who actually helped found the UCI physics department, and I got a really special opportunity while I was looking at graduate schools, to interview him and ask him about his experiences, and it was a really good experience getting to learn about his early time with meeting all these famous physicists, and how they inspired him, and that inspired me to decide on UCI as my primary choice.

Can you talk about an experiment you're working on now, or one that you're excited about?

I have been jumping around a couple of labs right now. My first year at UCI was with Dr. Matt Law in his lab, where the project I was working on was quantum dots which are these nano-scale electrically conductive material that’s essentially a single atomic layer thick that carries charge efficiently from Point A to point B. And this area is very good for creating new optical devices, and also for optics which I’m very interested in it because I want to take this technology and apply it to solar panels.

What's your goal for when you finish school? Have you got your stars already mapped out?

I want to work on solar panels either with NASA or a privatized company. I want to help forward that technology. I want to do something that's applicable in space science, but also is applicable here on Earth… so that it can be used for clean energy here on Earth, while also helping under-powered communities and increasing the accessibility to clean energy – but also be used for space sciences like student cube satellites or NASA’s greater satellite projects.

A whale. That's probably not the right answer, because my immediate thought is being the biggest presence of the room, which is absolutely not correct. Probably a whale because of the symbiotic relationship with the rest of the environment, and I would not have gotten to where I am without the support of everyone around me. Whales, at least the massive ones I’m thinking of, are not super social, they’re sort of doing their own thing.

I’m going to have to go with “Hello, Cold World” by Paramore. First off, “Hello, World” is like a defaults programming statement.  It’s also a song about growing up and being thrust into a world that you're very confused but very excited about. It’s a crazy world down there, you don’t know what’s going on, but you’re very passionate about getting into it.

Do you have any advice for other students with autism?

Follow your special interests and your passions, because that is going to take you as far as you want to go.

For Jessica Valdez, being active in national movements that support sexual assault survivors, a woman’s right to choose and reproductive health for all gender identities is more than a choice. It’s a commitment. So, when the senior undergraduate was nominated to represent Sonoma State...

There is a new chapter and new energy happening here at Sonoma State University. With the Fall semester well underway, our vibrant campus community is bustling once again with thousands of students continuing their journey to becoming global thinkers and future thought leaders.

Roman Angel Gallardo knew life has ups and downs. For most of his life, he lived in fear of the downs and chose to play things safe. He never took risks. Fear paralyzed him. “If I didn’t try, I couldn’t fail. If I didn’t apply, I couldn’t be rejected,” he would tell himself when...