Sky is not the limit for Psychology Grad and first-gen student Roman Gallardo
October 11, 2022 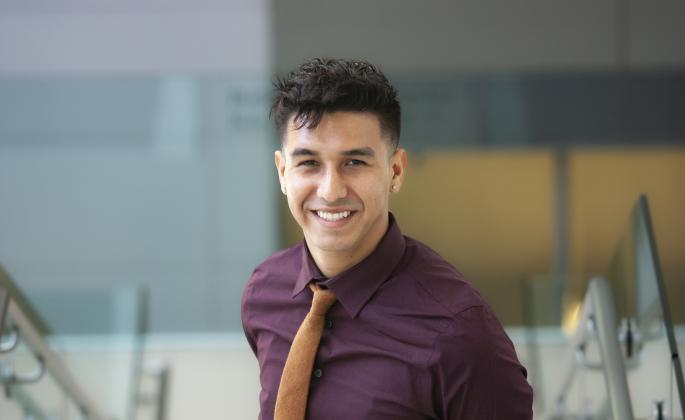 Roman Angel Gallardo knew life has ups and downs. For most of his life, he lived in fear of the downs and chose to play things safe. He never took risks. Fear paralyzed him. “If I didn’t try, I couldn’t fail. If I didn’t apply, I couldn’t be rejected,” he would tell himself when avoiding his fears of failure, rejection and even heights.

That all changed on August 12, 2016, after Roman took the simple step of scheduling “skydiving” on his calendar.

“I jumped out of a plane 14,000 feet up in the air to make a statement that fear no longer controls my life,” said Gallardo during an inspiring commencement speech to the 2019 Social Sciences graduating class at Sonoma State.

To say that Roman landed on his feet would be an understatement.

After earning his bachelor’s in psychology from Sonoma State in 2019, the first-generation college graduate went on to work at the University of Pennsylvania’s Peace & Conflict Neuroscience Lab.  More recently, Roman was awarded The NASEM Ford Foundation Predoctoral Fellowship ($81,000) and National Science Foundation Graduate Research Fellowship  ($102,000) and  joined the University of Chicago to earn a Ph.D. in the prestigious Booth’s Behavioral Science program.

“As a first generation Latino student, I didn’t know the difference between community college and university,” said Roman, recalling his upbringing in Whittier, California, on the outskirts of Los Angeles. Roman’s parents didn’t go to college and his grandmother stopped school altogether when she was 16 to support her family.

“Honestly, I was clueless about the whole college application process,” said Roman. “I just knew that an education was the most linear path to a better life. I saw my grandmother and my parents work hard so that I could have the educational opportunities that they did not have”.

That instinctive self-determination led Roman to visit Sonoma State, a place he had otherwise never heard of.

“Once I toured the SSU campus and saw the dorms filled with people who looked just like me and also had like-minded goals, I immediately felt at home. I was sold,” said Roman, who credits his stellar mentors, campus community experience, and education at Sonoma State as the game-changing moment of his life.

While a student at SSU, Roman soon discovered supporting resources like the McNair Scholarship Program, which helped Roman to elevate his potential to the next level.

Named in honor of Ronald E. McNair, the African-American NASA astronaut who was among those who tragically died during the Space Shuttle Challenger disaster in 1986, the McNair Scholars program works to address the equity gap among underrepresented students. This summer, Sonoma State received renewed funding for a multi-year cycle of $1.3 million that will continue to offer McNair Scholar opportunities to SSU students like Roman through at least 2025.

Learn more about how to get involved in the McNair Scholars Program at SSU here.

“Roman is a prime example of what Latinos and other underrepresented students are capable of achieving when given the opportunity and support to pursue their education and dreams,” said Dr. Elisa Velasquez-Andrade, Psychology Department Chair at Sonoma State, who Roman credits as being incredibly influential to his academic journey .

Becoming a McNair Scholar also reinforced Roman’s decision to change his major from finance – a choice based on a random personality test he took in high school – to his true passion of psychology. Meetings with supportive McNair staff members like Stacey Pelton also helped Roman refine his research interests and land his pivotal research position at the University of Pennsylvania.

“I was always interested in better understanding why people behave in a certain way. And as a minority, I wanted to research empathy and study contributors to negative perceptions towards stigmatized groups,” explained Roman. While a lab manager and research coordinator at the Ivy League University Pennsylvania, he dove deep into projects aimed at identifying the psychological drivers of real-world social conflict, injustice and inequality, and affecting change in intergroup conflicts.

Roman also presented his findings on intergroup conflict at national conferences including the Society for Personality and Social Psychology, Society for the Psychological Study of Social Issues, and International Society of Political Psychology.

In starting his next chapter of pursuing a Ph.D. at the University of Chicago, Roman encountered an unexpected challenge.

“When I told my parents about my Ph.D. plans,” laughed Roman, “They were like, ‘Wait, what? Didn’t you already graduate from college? Why are you going back to school?”

A creative solution: Roman made a PowerPoint presentation for his family about his Ph.D. plans, which he hopes will also pay things forward for the next generation.

“Now they totally get it and are really excited,” said Roman about his family’s reaction. “I’ve got two brilliant little brothers with a lot of potential, Nathan and James, and I think it will be awesome to try and help them out with their college journeys, too.”

As the first building on our campus, Stevenson Hall has always been central to the Sonoma State community. Whether you’re an alum who spent many hours learning and studying in Stevenson, faculty and staff who enjoyed careers there, or a campus visitor to the many offices or lecture spaces in...

For Jessica Valdez, being active in national movements that support sexual assault survivors, a woman’s right to choose and reproductive health for all gender identities is more than a choice. It’s a commitment. So, when the senior undergraduate was nominated to represent Sonoma State...

There is a new chapter and new energy happening here at Sonoma State University. With the Fall semester well underway, our vibrant campus community is bustling once again with thousands of students continuing their journey to becoming global thinkers and future thought leaders.