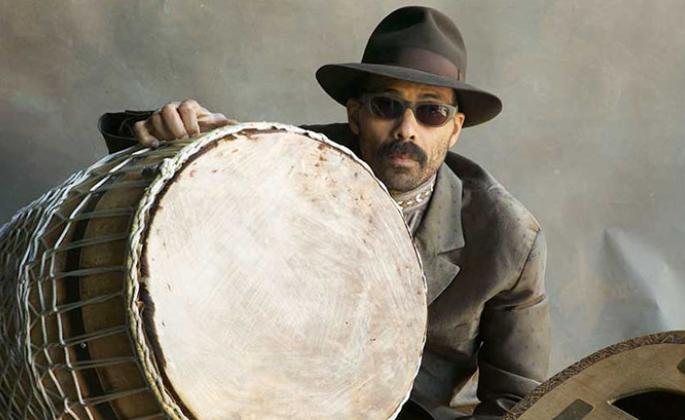 The spring 2017 Sonoma State University Jazz Forum features internationally renowned percussionist and composer Kahil El'Zabar and his Ethnic Heritage Ensemble, multi-talented George Young, jazz gutarist John Stowell and many others. The Jazz Forum is a unique performance/master class designed to expose jazz majors and guests to a wide variety of jazz styles. Guest musicians perform their music with commentary in a relaxed atmosphere. Performances are on Wednesdays at 1 p.m. in GMC 1029 and free of charge unless otherwise noted. Parking is $5-$8 on campus. See website for more information.

Gregory Uhlmann is a guitarist, improviser, composer, and songwriter based in Los Angeles. His teaching has included workshops at CalArts, University of Oregon, University of Nevada (Reno), Denison University, and more. He holds a BFA in jazz guitar from the California Institute of the Arts where he also studied composition, West African music, Gamelan, North Indian Classical music, and Brazilian music.

Internationally renowned percussionist and composer Kahil El'Zabar is considered one of the most prolific jazz innovators of his generation. Indeed El'Zabar is a true "Renaissance Man," with a musical style and content that flows from ancient Africa to the modern world.

El'Zabar created the Ethnic Heritage Ensemble after he graduated from the school of the Association for the Advancement of Creative Musicians in 1976. He teamed up with tenor saxophonist Edward Wilkerson, Jr. to play music that combined contemporary African American musical styles, like jazz, with more traditional African instrumentation and rhythms.

The duo would frequently grow to a trio in these first years, adding musicians like saxophonist Light Henry Huff and Kalaparusha Maurice McIntyre. In 1988, they added trombonist and conga player Joseph Bowie, who is the leader of the jazz-funk group Defunkt. In 1997, Wilkerson was replaced by Ernest "Khabeer" Dawkins who is the leader of New Horizons Ensemble.

John is a unique jazz guitarist influenced as much by pianists and horn players as he is by guitarists. His original take on harmony, chords and improvisation sets him apart. He has taught internationally for 30 years in every educational setting. His clinics are informal, hands-on and informative. In addition to music theory and guidelines for improvisation, John shares his professional experience with the business of music.

George Young is one of the most frequently heard musicians of our time. Young plays over ten instruments, including tenor, alto, soprano, and sopranino saxophones, clarinet, alto flute, C-flute, East Indian ethnic flutes and piccolo.

Ben Allison and Think Free will be in residence March 1-3. In addition to Jazz Forum, they will be conducting clinics and open rehearsals, and performing on March 3 at 7:30 PM in Schroeder Hall. Tickets

In a career that spans nearly 30 years, bassist/composer Ben Allison has developed his own instantly identifiable sound, solidifying an international reputation as one of the leading voices of his generation.

Think Free combines Ben's love of rock grooves with the free-wheeling interplay of a trumpet and guitar-based quartet. The group's three albums, Cowboy Justice, Little Things Run the World, and Think Free each topped the jazz radio charts in the US and showcase Ben's creative use of orchestration to create a sound that's cinematic in scope, but with the elements of melody and groove that have become hallmarks of his style. Think Free consists of Ben Allison on bass, Jeremy Pelt on trumpet, Steve Cardenas on guitar and Allan Mednard on drums.

Carlos Medrano, born in Havana, Cuba, began his musical studies by teaching himself to play bongos and congas using traditional Cuban music and Rumba as his guide. Before arriving in the United States in March 2008, he worked with a well-known pianist from Cuba, Alexis Bosch. Since then, he has been working with bands in Sonoma County (Batacha and Carlos Herrera Band) and the Bay Area.

The Green Music Center at Sonoma State University, home of the Mastercard Performance Series, announced the 2018–19 Season today. It becomes the first full season where curation was led by new Executive Director Jacob Yarrow. The season spans September 15, 2018–May 9, 2019 and comprises 35...