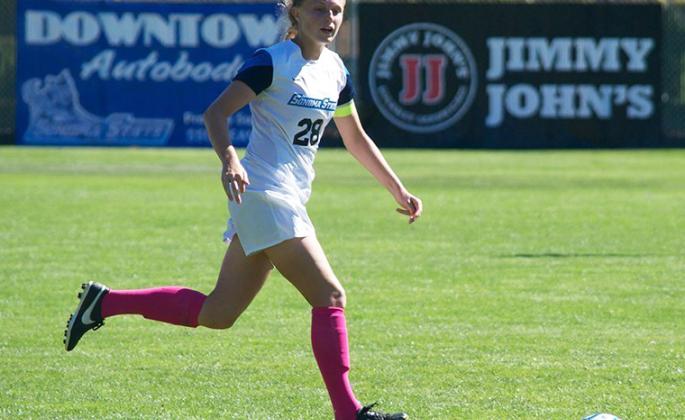 Senior Taylor Enzler doubled her career total with two goals on Saturday, lifting the Sonoma State women's soccer team to a 3-1 victory over host Dixie State in St. George, Utah. Cecilia Sifuentes also found the back of the net for the Seawolves who improved to 2-1-1 this season.

Miriam Bloom netted the first goal of her career in the first half and it held up as the game-winner, leading the Sonoma State women's soccer team to a 1-0 victory over Colorado Mesa on September 8 in St. George, Utah. Bloom's score came in the 20th minute when Sara Van Wagoner centered a pass. Bloom didn't miss her chance, burying it into the back of the net to give the Seawolves the win.

Despite playing a man down for the final 45 minutes, of which included two 10-minute overtimes, the Sonoma State men's soccer team forced host Azusa Pacific into a scoreless draw Saturday night at the Cougar Soccer Complex in Azusa. It is the third tie in four games for the Seawolves to start the year, and the second of the scoreless variety. The Seawolves fell to 0-1-3 to open the 2016 season.

The Sonoma State men's soccer team opened a two-game road set in Southern California, but lost a narrow 2-1 contest to host California Baptist University on September 8. With five seconds left in regulation, SSU's Ryan Rohane buried a header from five feet out, but it was too little too late. It was Rohane's first goal of the season.

Analicia Garcia continued to impress in just her second collegiate cross-country race, finishing second overall for the second consecutive weekend. Garcia crossed the line just three seconds behind first place to highlight the sixth-place finish for the Sonoma State women's cross country team at the invitational on September 10 at Patrick's Point State Park in Trinidad. Garcia shattered the program record for the fastest 6000-meter time by 30 seconds, coming in at a time of 21:11.46, besting the old mark of 21:41 set by Kathy Lenno in 2001.

Caiti Wiesner recorded a team-high nine kills in her first-career start, but the Sonoma State volleyball team fell on the losing end of a three set sweep at the hands of No. 12 Alaska Anchorage on September 10 to wrap up an 0-4 weekend at the three-day Division II West Region Volleyball Showcase in Rohnert Park. The Seawolves have lost three straight, falling to 2-5 this season.

Seawolves Lose in Straight Sets by Dixie State at Home

Sonoma State University succumbed to the No. 14 Vikings of Western Washington University in three sets on September 9. The first set was a scramble with the score coming to a tie up to 11 times with five lead changes. Sonoma almost tied up the game at 16-17, but Western Washington outscored the Seawolves 8-3 to finish the set 19-25.

The No. 25 California Baptist University Lancers defeated the Sonoma State University Seawolves in their debut match at the Division II West Region Showcase in four sets on September 8. The Seawolves' top hitters of the match Morgan Annala, Kelsey McIntire and Rachel Andrews were held to 26 kills combined, but contributed 31 points to the team.