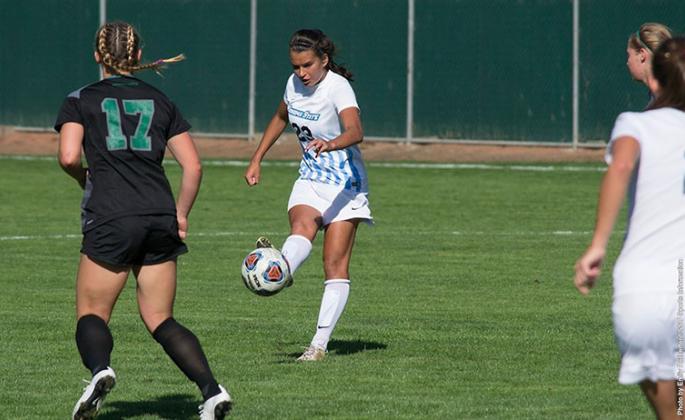 No.20 Seawolves Play to 1-1 Deadlock Against Chico State

Sam Layman scored for the second time in three matches, putting the Sonoma State women's soccer team up 1-0 early in the first half, but Chico State evened the score just four minutes later and the match would end up in a 1-1 tie on October 21 at University Soccer Field in Chico.

Sarah Lindborg and Jenna Viss each scored their first goals of the season to help Sonoma State defeat Humboldt State, 2-1. Sonoma improves 8-1-0 in the CCAA and 10-2-1 overall, pulling into a tie for first place in the CCAA standings.

Seawolves Stunned by Game-Winner in 89th Minute at Chico

With the match still scoreless after 88 minutes of action, the Sonoma State men's soccer team surrendered the go-ahead goal with just 92 seconds left on the clock in regulation in a stunning 1-0 loss to host Chico State on Oct. 21 at University Soccer Field in Chico. The Seawolves see their eight-match unbeaten streak come to an end dropping to 7-3-5 overall and 6-2-2 in the CCAA.

Alex Cucuk, Eric Alvarado and Raad Aljabi all found the back of the net on Oct. 19. The defense allowed just two shots in 90 minutes as the Sonoma State men's soccer team cruised to a 3-0 victory over visiting Humboldt State at the Seawolf Soccer Field. The win put the Seawolves to 7-2-5 overall and 6-1-2 in conference play. The first official NCAA Division II West Region rankings were also released on Oct. 19, and the Seawolves are at No. 6 this week. Should the Seawolves remain in the Top 6 when the NCAA Division II Men's Soccer Championship Tournament field is released on Nov. 7, they will qualify for an NCAA berth for the first time since 2010.

Sonoma State defeated Cal State East Bay in excellent form on Oct. 22 in the Wolves' Den. The Seawolves set a new season high in assists (62), kills (68) and was one-point shy of matching their season high point total with 76. They are third in the CCAA in hitting percentage, assists, and kills.

The Seawolves swept the Cal State Monterey Otters in three sets on Oct. 21 in the Wolves' Den. Sonoma State almost doubled Cal State Monterey Bay in kills and blocks, a feat exemplified by Rachel Andrews. Andrews had a big night with 11 kills on a .575 hitting percentage and five total blocks, one of them a solo. She had 14 points on the night and leads the CCAA in hitting percentage and is second in total blocks

Analicia Garcia crossed the finish line at 22:36.8 to place 24th, pacing the Sonoma State women's cross country team to an 11th-place finish out of 12 teams on Oct. 22 at the 2016 CCAA Cross Country Championships at Cucamonga-Guasti Regional Park in Ontario. Garcia's finish at this year's conference meet is the highest for the program since Katie Bolce placed 22nd in 2010.

The Sonoma State women's tennis team wrapped up the fall tournament portion of its 2016-17 schedule on Oct.22-23 at the Warrior Invitational hosted by Stanislaus State in Turlock with Jensyn Warren winning both the singles and doubles bracket.n Jensyn Warren captured the Gold Bracket singles title, winning all three of her singles matches with ease in straight sets, including the Gold Bracket championship match against Stanislaus State's Cassidy Ferrell (6-1, 6-1). Warren also teamed with Jenna DeTurk in doubles action and the duo knocked off Ferrell and Warrior teammate Jaella Conway in the doubles championship also on Oct.23, 8-6. In total, the Seawolves went 14-9 in singles matches and 8-4 in doubles matches this weekend.