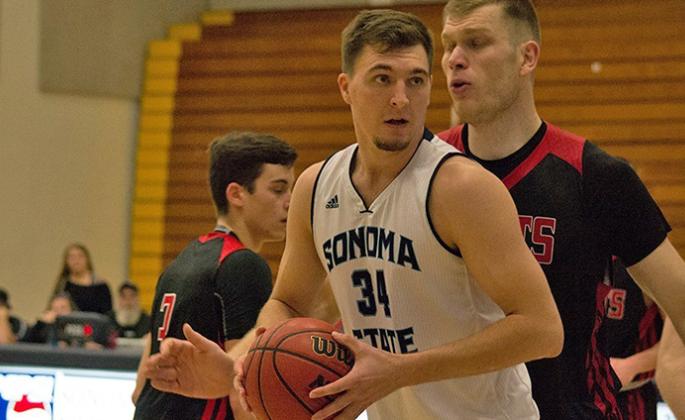 Khalid Johnson secured a Sonoma State men's basketball victory with his last-minute lay-up in a 59-57 triumph over Westminster College. The Seawolves (4-2) erased a halftime deficit and outscored the Griffins 29-25 in the second half in their last game at the Dixie State/Wingate Thanksgiving Classic on Nov. 26 at Burns Arena in St. George, Utah. The Seawolves trailed by as much as eight in the first half, but managed to chip away and get to within two points at halftime (32-30) after a lay in by Cochran beat the buzzer.

Three Sonoma State players scored in double-figures, including a team-high 18 from Jackson Gion off the bench, as the Seawolves nearly erased a 12 point deficit late before coming up short against host Dixie State, 64-62, in the opening game of the Dixie State/Wingate Thanksgiving Classic on Nov. at Burns Arena in St. George, Utah.

Former Sonoma State University women's water polo All-American and SSU Athletics Hall of Famer Chelsea Hennan has been tabbed as the Seawolves' Interim Head Women's Water Polo Coach for the upcoming 2017 season. Hennan replaces Coralie Simmons, who stepped down in November to coach water polo at UC Berkeley. Hennan was the team's assistant coach for the past nine seasons.

A former SSU women's water polo student-athlete, Hennan was selected First Team All-American in 2005 by the American Water Polo Coaches Association (AWPCA). She was, at that time, the first water polo player in school history to earn All-America status. Being an All-American was nothing new to Hennan, however, as she had previously earned the designation at Santa Rosa Junior College.

Holding a 14-point lead with seven minutes to play in regulation, the Sonoma...