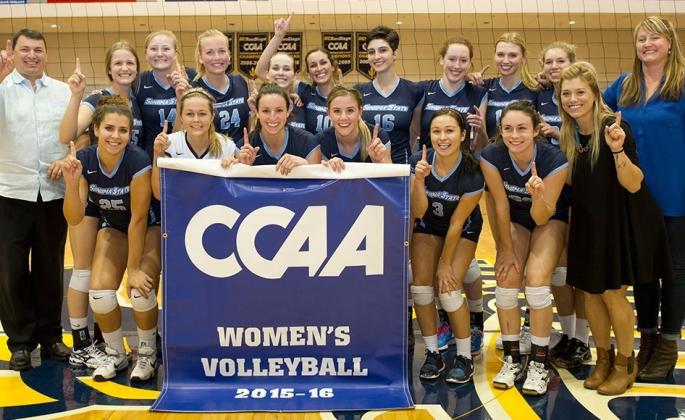 The Sonoma State women's volleyball team continued their torrid play on Nov. 20, sweeping Cal Poly Pomona in three sets to earn a spot in the finals of the CCAA Championship Tournament in La Jolla. Seniors Madelyn Densberger and Caylie Seitz led the way with 10 kills each. Calan Seitz had 16 assists and Kaitlyn Connolly added 16 digs. The Seawolves haven't lost a match since September 17th.

Behind 14 kills from the CCAA Player of the Year Caylie Seitz, the Sonoma State women's volleyball team cruised to its 20th consecutive victory and its ninth consecutive sweep with a 3-0 win (25-21, 25-16, 25-22) over Chico State on Nov. 19 at the CCAA Championship Tournament quarterfinal in La Jolla.

Sonoma State University senior Caylie Seitz was named the California Collegiate Athletic Association (CCAA) Volleyball Player of the Year for the second time in her career at the CCAA Championship Banquet on Nov. 18 in La Jolla. Senior Kaitlyn Connolly was selected as the CCAA's Libero of the Year and head coach Bear Grassl earned the conference's Coach of the Year award for the third straight season.

The Sonoma State men's basketball team closed out the 15th annual Ron Logsdon Classic with a 77-56 win against the Academy of Art on Nov. 21 at the Wolves' Den. Just one week after a loss to the Urban Knights in San Rafael, the Seawolves scored 14 three-pointers on their way to the decisive 21-point victory. Tournament MVP James Davis led the way with 19 points on the back of five three-pointers.

The Sonoma State men's basketball team held on for a 72-64 victory over Dixie State on Nov. 20 at the Wolves' Den thanks to three players scoring in double-figures, including a 16 point effort from David Ahern.

James Slade and David Ahern scored a team-high 14 points each as the Sonoma State men's basketball team used a big second half to defeat Holy Names 81-73 on Nov. 17 in Oakland. The Seawolves connected on 45 percent of their shots and outrebounded Holy Names 40-33.

Tanner Adams went for a team-high 13 points and Taylor Todd scored 11 as the Sonoma State women's basketball team rolled to a convincing 75-61 victory over visiting Menlo College on Nov. 21 at The Wolves' Den in Rohnert Park. The Seawolves have won three straight, improving to 3-1 this season.

Hannah Sourek made her season debut on Nov. 17, coming off the bench to score 19 points and grab eight rebounds in the Seawolves' 55-39 win over visiting William Jessup at The Wolves' Den in Rohnert Park.