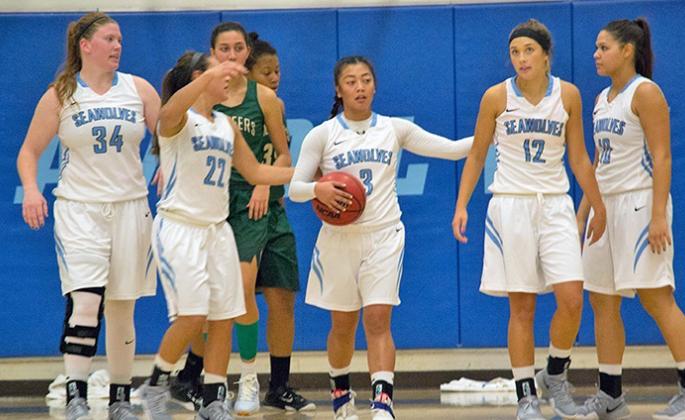 Sonoma Has Big Second Half to Beat Dominican Penguins, 87-84

After trailing by 12 at halftime, the Sonoma State women's basketball team rallied for 54 second-half points to defeat Dominican, 87-84, on Nov. 12 at Walter Gleason Gym in Belmont. Five players scored in double figures to lead the Seawolves, who improved to 2-0 this season.

Kylie Kiech scored the team high of 20 points, 13 came in the second half and was 6-8 from the free-throw line. Carly Gill scored a career high 17 points, nine of which came from the free throw line. Madison Burroughs scored 15 points and had 3 steals.

Sonoma State defeated their tournament host, Notre Dame de Namur 88-67 on Nov.11. This is their first official win and game of the season, having split their previous exhibition matches.

As a team, the Seawolves were over 50% from the field goal range and from beyond the arch and were 13 for 18 at the line. Their score of 88 is the most points scored against a Division II team since the 2006-07 season when Sonoma beat Stanislaus State, 89-72.

Jimmy Golden and Luke Cochran both scored in double-figures as the Sonoma State men's basketball team dominated both ends of the floor to defeat Notre Dame de Namur 64-42 on Nov. 12 at the Pioneer Challenge hosted by Cal State East Bay in Hayward. The Seawolves earn a split in the season-opening weekend, moving to 1-1 to begin the 2016-17 campaign.

Jimmy Golden dropped in a career-high 21 points in 27 minutes of action, and despite holding an eight-point halftime lead, the Sonoma State men's basketball team suffered a 72-64 loss to Western Washington at the Pioneer Shootout in Hayward on Nov. 11. It was the season-opener for both teams.

The Seawolves ended their CCAA regular season play in a tough five set loss to Cal Poly Pomona. Their record falls to 14-11 overall and 12-6 in the CCAA. The Seawolves have earned a spot in the 2016 CCAA volleyball tournament. They will play Cal State LA on Nov. 17 at 5 p.m. in Coussoulis Arena in San Bernardino. The last time these two teams faced off was September 30 and ended in a four-set loss for the Seawolves.

The Sonoma State Seawolves' eight game winning streak was ended by the No.14 Cal State San Bernardino Coyotes on Nov. 12 in three straight sets. This puts the Seawolves at a 14-10 overall record, and 12-5 in the CCAA.

Sonoma State University women's soccer junior defender Cecilia Sifuentes was selected to the 2016 Division II Conference Commissioners Association (D2CCA) Women's Soccer All-West Region Second Team on Nov. 16. Sifuentes, from Alameda, Calif., earns her first-career All-Region honor as one of the anchors of the Sonoma State defense that is ranked 14th in the nation in goals against average (0.53) and 15th in the nation in shutout percentage (.611). An All-CCAA Second Team selection this season as well, Sifuentes scored a goal and added two assists in 18 games played. This is the 16th D2CCA All-Region honor for a Sonoma State women's soccer player since 2011.

For the second consecutive year, the Sonoma State women's soccer team earned the National Soccer Coaches Association of America (NSCAA) Team Academic Award or exemplary performance in the classroom as a team during the 2015-16 academic year. The Seawolves were one of 592 collegiate women's teams from throughout the United States to earn the honor. To qualify for the award, the team must have a minimum grade point average of 3.0 or higher for the entire academic year. The team GPA is determined by adding every player's GPA, then dividing by the number of players. As a team, Sonoma State combined for a team grade point average of 3.31 in 2015-16.

No. 21 Seawolves Ousted From NCAA Tournament In First Round

Sam Layman scored in the 49th minute to cut a two-goal deficit in half, but the Sonoma State women's soccer team saw its 2016 season come to an end after Azusa Pacific piled on a late goal to win 3-1 in the First Round of the NCAA Division II Women's Soccer Championships in La Jolla on Nov. 10. The No. 21 ranked Seawolves, the No. 3 seed in the West Regional, end the year with a 12-3-3 record.

Seawolves Fall to Broncos in Opening Round of NCAA Tournament

The Sonoma State men's soccer team saw its 2016 season come to an abrupt end on Nov. 10, losing 2-0 to Cal Poly Pomona in the opening round of the NCAA Division II Men's Soccer Championship Tournament at Interbay Stadium in Seattle, Wash. The Seawolves, who entered the NCAA tournament for the first time since 2010 as the No. 4 seed in the West Region, ends the year with a 10-5-5 record.