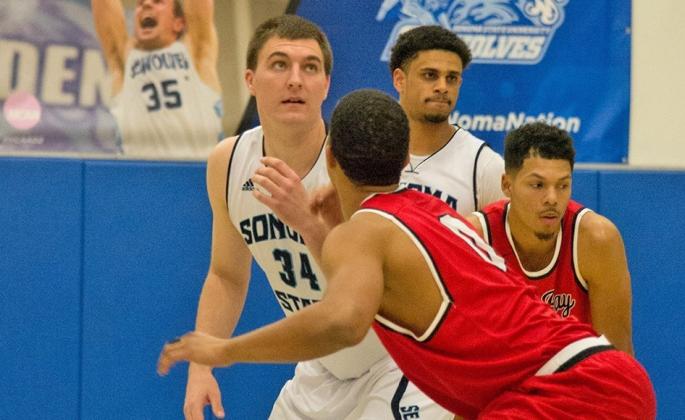 Holding a 14-point lead with seven minutes to play in regulation, the Sonoma State men's basketball team escaped with a 61-59 victory over visiting Cal State East Bay on Jan. 23 at The Wolves' Den in Rohnert Park. With the victory, the Seawolves move to No. 6 in the CCAA standings with a 6-5 mark against conference opponents. The Pioneers fall to 7-11 (3-8 CCAA). David Ahern contributed 21 points, including 16 in the second half, as the Sonoma State men's basketball team put up a late offensive rally to top Cal State Monterey Bay 74-62 in The Wolves' Den on Jan. 22.

After trailing 4-3 early in the second quarter, the Sonoma State women's water polo team came alive, outscoring host Cal State Monterey Bay 10-3 the rest of the way to capture its first victory of the 2016 season, 13-7, on Jan. 23 in Seaside. The Seawolves improve to 1-4 while the Otters remain winless at 0-5.

The Sonoma State women's basketball team led for nearly 24 minutes on Jan 23, but a huge second half by visiting Cal State East Bay proved to be detrimental in Saturday's 60-56 loss at The Wolves' Den in Rohnert Park. The Seawolves fell to 8-12 overall and 3-8 in the CCAA. The Pioneers (15-4, 9-2 CCAA) remained in a tie for third place with Stanislaus State. Four Sonoma State women's basketball players scored in double figures as the hosts sprinted out to a significant lead early in a convincing 60-47 victory over Cal State Monterey Bay on Jan. 22 at The Wolves' Den in Rohnert Park. Hannah Sourek scored a team-best 13 points.

The Sonoma State men's tennis team opened the 2016 campaign with a 7-0 loss at NCAA DI Santa Clara on Jan. 20. The Seawolves will play three scrimmages between now and their next regular season match of the season at home on Feb. 5 against Holy Names.