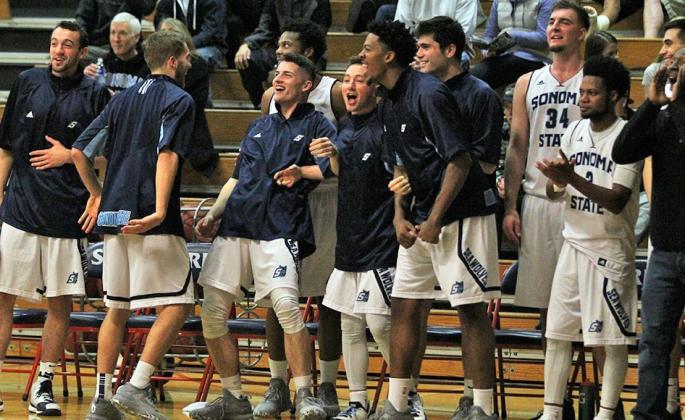 Luke Cochran had a team-high 12 points and Armani Nicolis scored 11 points of his own, as the Sonoma State men's basketball team upset No. 11 UC San Diego, 54-48, at Haehl Pavilion in Santa Rosa for their fifth straight win on Jan. 14.

The Seawolves, who lead the nation in scoring defense only giving up 57.0 points per game, improve to 11-4 on the year and remain in a tie for third place in the CCAA at 7-2 with SSU's next opponent, San Francisco State. This was Sonoma's first win over a team ranked No. 11 or higher in five years.

Jackson Gion came off the bench to score a team-high 18 points and Jimmy Golden added 16 as the Sonoma State men's basketball team pulled away late for a 66-56 victory over Cal State San Bernardino on Jan. 13 at Haehl Pavilion in Santa Rosa.

The Seawolves succumbed to the Coyotes of Cal State San Bernardino on Jan 13. Leading the Sonoma States' offense, Kylie Kiech scored 20 points, six from behind the three-point arch and was 12 for 12 from the free-throw line. Madison Burroughs added twelve points and six rebounds, five of them offensive, however it was Taylor Todd that lead the team with twelve total rebounds.

The Sonoma State men's tennis team got its 2017 championship season underway on Jan. 16 against NCAA Division I foe Saint Mary's, falling on the losing end of a 7-0 score.