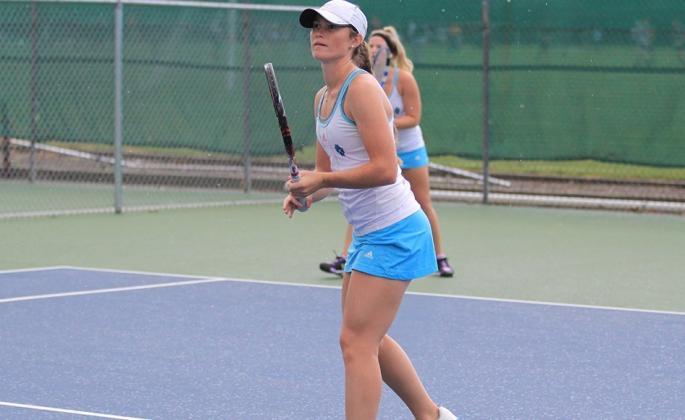 Less than 24 hours after a home win over Holy Names, the Sonoma State women's tennis team showed no signs of being sluggish as they cruised to a 9-0 sweep of UC Santa Cruz on Feb. 6. No UCSC player won more than two games in singles play as the Seawolves turned in a masterful performance on the road. The win leaves the Seawolves at 2-0 on the young season.

The Sonoma State women's tennis team opened their 2016 season in fine fashion on Feb. 5, downing Holy Names by the score of 8-1 at the Seawolf Tennis Courts in Rohnert Park. Four different Seawolves recorded victories in both singles and doubles as the No. 26 team in the country lived up to its ranking.

The Sonoma State men's tennis team suffered a 7-0 loss to NCAA Division I UC Davis on Feb. 7 in Davis to drop to 0-4 this season while the Aggies jumped to 8-3 on the year. The Seawolves will travel to Hawaii this week to play Hawaii Hilo on Thursday and Saturday and Hawaii Pacific on Friday.

Despite splitting the singles matches, the Sonoma State men's tennis team dropped two of three in doubles to fall to George Fox on Feb. 6 in Rohnert Park, 5-4. The Seawolves picked up wins at the No. 2, 3, and 4 positions in singles, but a rough showing in doubles against a very good Bruin squad spelled defeat.

The Sonoma State men's tennis team made their home debut on Feb. 5, but it would be the No. 33 Holy Names Hawks emerging with a 9-0 win thanks to sweeps in both singles and doubles competitions.

Jena Kaser went 4 for 4 with a home run and five RBI, helping the No. 19 ranked Sonoma State softball team to a 7-0 lead after the first two innings, but Colorado Mesa rallied for 13 runs over the next three innings for a 13-7 win on the final day of the MSUB Desert Stinger at Majestic Park in Las Vegas on Feb. 7. The Seawolves (2-3) will open CCAA play next weekend at home against Chico State.

The No. 19 Sonoma State softball team knocked off No. 20 Augustana 2-1 in nine innings before defeating Western Washington 3-1 for its first wins of the 2016 season on Feb. 6 at the MSUB Desert Stinger at Majestic Park in Las Vegas, Nev.

The Sonoma State softball team suffered a pair of losses on opening day of the 2016 season at the MSUB Desert Stinger in Las Vegas, falling 13-2 in six innings to California Baptist before coming up short after a late inning rally, 9-8, to host Montana State Billings on Feb. 5.

Ronnie Harris scored a team-high 14 points and dished out three assists, but the Sonoma State men's basketball team went cold midway through the second half, held without a field goal for more than eight minutes amidst a 17-0 run by visiting Humboldt State that put the game out of reach in Friday's 67-51 loss on Pack Half The Den Night in Rohnert Park on Feb. 6. The Seawolves fell to 12-9 overall and 7-8 in the CCAA while the Lumberjacks jumped to 15-6 and 9-6 against conference foes.

Fighting through 10 ties and nine lead changes, the Sonoma State men's basketball team nearly pulled off an upset, but couldn't overcome a 10-point deficit late in the second half in the 68-62 loss to Cal Poly Pomona at The Wolves' Den in Rohnert Park on Feb. 5.

Hannah Sourek had 15 points and 12 rebounds, but it wouldn't be quite enough as the Sonoma State women's basketball team lost a heartbreaker in double overtime to Humboldt State on Feb. 6, 73-64. It was the second straight night that the Seawolves were able to build up a sizable lead, only to see it slip away. The loss leaves the Seawolves at 8-16 overall and 3-12 in CCAA play. The Lumberjacks improve to 11-11, 8-7 CCAA.

Despite building up a 16-point halftime lead, the Sonoma State women's basketball team fell to Cal Poly Pomona 50-48 in CCAA action at The Wolves' Den on Feb. 5.

Ryan O'Malley stayed hot at the plate and Daniel Caresio delivered four hits on the day, but the Sonoma State baseball team was stunned by Cal State Monterey Bay with a pair of walk-off wins in a non-conference twinball in Seaside on Feb. 6. The first game saw the Seawolves rally to take a lead in the top of the tenth only to see the Otters score twice in the bottom of the inning. After a big comeback in game two, the Seawolves surrendered an unearned run in the sixth and final inning (game called due to darkness). With the losses, the Seawolves see their record drop to 1-4 on the season.