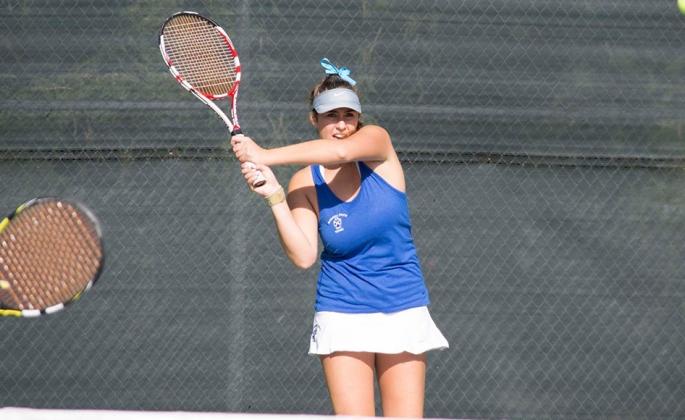 With the No. 26 Sonoma State women's tennis team trailing 4-3 in the match to No. 23 Academy of Art, Jordyn Kearney and Jensyn Warren rallied from first-set losses to force a tiebreaking third. Warren fought off match-point on three occasions late in her tiebreaker before capturing a thrilling win to clinch the 5-4 victory for the Seawolves on Feb. 20 in San Francisco. Sonoma remains perfect on the season at 5-0 while the Urban Knights suffer their first loss of the year, falling to 3-1.

Jordann White recorded two doubles and brought in four runs as the No. 19 Sonoma State softball team blew past Dominican 8-1 in non-conference action on Feb. 17 in San Rafael.

The Sonoma State men's golf team tied for third place with Western Washington after carding a team score of 918 (+54) at the East-West Golf Invitational at The Course at Wente Vineyards in Livermore on Feb. 16.

For the first time since 1989, the Sonoma State men's basketball team battled through three overtimes, but it was host San Francisco State that would come out on top, as the Gators outlasted the Seawolves 80-76 on Feb. 20 in San Francisco. The Seawolves fall to 13-11 overall and 8-10 in the CCAA, but have clinched a spot in the upcoming CCAA tournament.

For the second straight day, the Sonoma State baseball team split a doubleheader with the Concordia Cavaliers on Feb 21 at the Seawolf Diamond in Rohnert Park. In game one the Cavaliers were able to hold off the Seawolves to take the opener, 7-5. In game two the Seawolves added a run in the fifth and rode great pitching from Haydon Turpin and Jackson Zarubin to a 5-3 victory.

The Sonoma State baseball team was one out away from a doubleheader sweep of the Concordia Cavaliers on Feb. 20 at Seawolf Diamond, but the winless Cavaliers found a way to take the lead in the eighth to earn their first win of the season. In game one, a sparkling start by senior right-hander Ryan Luna and multi-hit games for Ryan O'Malley, Adam Manzer and Spencer Neve helped Sonoma State to a 4-0 victory over Concordia in the morning tilt.

A scoreless game was broken open in the seventh inning by visiting Academy of Art, as their four run barrage held up to a late rally by Sonoma State in the Seawolves' 4-2 loss to the Urban Knights on Feb.16 at Seawolf Diamond.

With the help of Hannah Sourek's team-high 13 points and eight rebounds, the Sonoma State women's basketball team held on to their lead on Feb. 20 to beat San Francisco State 50-44. The Seawolves improve to 4-14 against CCAA opponents and 9-18 on the season.

The Sonoma State women's water polo team swam out to a 3-0 lead after the first eight minutes of play, and while visiting Fresno Pacific pulled to within one goal twice, the Seawolves would never relinquish the lead en route to the 10-8 victory over the Sunbirds on Feb. 21 in Rohnert Park. Sonoma improves to 3-8 this season.

The Sonoma State women's water polo team jumped out to a 4-1 lead through the first quarter of play, but visiting Cal State East Bay scored 10 of the next 11 goals in to defeat the hosting Seawolves 11-7 on Feb. 19 in Rohnert Park.

Blaine Mengert won his first set at No. 2 singles, but his opponent, Nash Vollenweider rallied to secure the 7-0 match victory for Saint Mary's over the Sonoma State men's tennis team on Feb. 20 in Moraga.