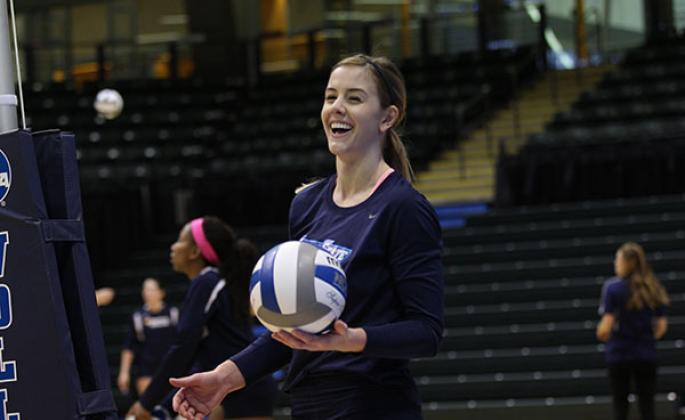 After Madelyn Densberger finished up her last season of volleyball at Sonoma State University, the school leader in both serves and sets played planned to take a day off. That is, if jumping out of an airplane can be considered rest and relaxation.

"Once my volleyball career was over, I wanted to do something I had never tried before," says Densberger. "So I finally went skydiving, and it was amazing." Densberger was productive in her tenure at Sonoma State University within the 30-by-60 foot dimensions of the volleyball court. She's recorded 1,188 kills and 1,264 digs over her career, both ranked fifth all-time in program history. Her accomplishments off of the hardwood are impressive as well, as she nears completion of a master's degree in business.

When she committed to play for Sonoma State back in 2011, women's volleyball coach Bear Grassl spoke of her as a cornerstone for years to come. That's been proven true, as she ranked second on the team last season in four different categories. But Grassl was equally impressed with Densberger's character off the court.

The two-sport athlete played both basketball and volleyball at St. Helena high school. Balancing two sports as well as keeping her grades up was a challenge, but her parents always pushed her to stay focused. "They always expected me to expect the best of myself," says Densberger. She achieved a grade point average above 3.8, becoming a member of the National Honor Society before attending Sonoma State University.

Densberger started playing sports early in life, originally focusing on basketball rather than volleyball. It wasn't until middle school that she was introduced to the sport she would grow to love.

After making the decision to move on to volleyball at the collegiate level, her father, an avid basketball fan, quickly found a new court to appreciate. "He likes to think he knows more about volleyball than I do," says Densberger with a laugh.

Part of the reason she chose Sonoma State was her connection to coach Grassl, who had coached her on a club team when she was a senior in high school. She also admired the transparency of the recruitment process at Sonoma State. "A lot of other schools make false promises, or guarantee championships," says Densberger. "Here it was really open and honest, and that's rare."

Densberger highlights winning last year's regionals as a favorite moment in her volleyball career. "I never get super emotional, but when we won I just started crying," says Densberger. "It was so embarrassing." The Seawolves ended last season 26-4, winning 22 straight in that span, marking the best record in school history.

After college she plans to enter the workforce to gain some experience, and to explore the world. "I love to travel, and I'm really excited to go more places now that I have time," says Densberger. "I would've never discovered that without volleyball."