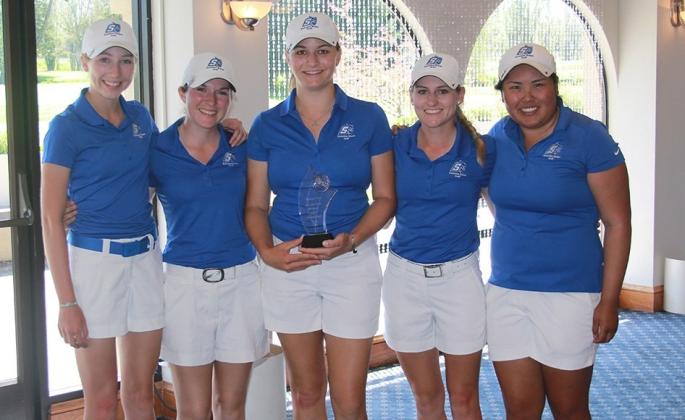 The Sonoma State women's golf team nearly erased a 10-shot deficit in the second and final round on April 5, but came up just short, finishing No. 2 out of 10 teams, wrapping up its own tournament just two strokes back of Chico State at this week's Sonoma State Spring Invitational at Foxtail Golf Club in Rohnert Park.

Angelique Lopez's performance in the 100-meter dash highlighted a strong evening of competition for the Sonoma State women's track & field team on April 10 in Chico. Following a personal record of 12.55 in the preliminaries, Lopez finished No. 4 in the final in a blistering time of 12.49. Not only was it another personal record for Lopez, it was the fastest time run by a Sonoma State student-athlete since records began in 1996, topping Tiombe Wiley's mark of 12.50. Unofficially Lopez is now 5th in school history.

Alison Strycula went 4 for 7 with a double, but the Sonoma State softball team suffered losses of 9-2 and 8-0 in six innings on April 11 against No. 3 Humboldt State in Arcata. The Seawolves dropped to 26-14 overall and to No. 4 in the CCAA with a 16-11 mark.

On April 6, Amanda Llerena continued to be untouchable to opposing hitters, posting a pair of complete game victories, allowing just one run on eight hits in 14 innings as the Sonoma State softball captured wins of 5-0 and 3-1 over host San Francisco State.

Holding only a half game lead over both Chico State and Cal State Monterey Bay in the CCAA North Division standings heading into the April 5 doubleheader, the Sonoma State baseball team hosted the Otters in an important matchup. While the Seawolves received some outstanding pitching in both games, the Otters got just enough offense to pull away with a sweep to take over first place.

On April 4, the Sonoma State Seawolves found themselves in a rare Sunday doubleheader at Seawolf Diamond against the Tritons. The Seawolves late comeback in the opener was thwarted by the Tritons, but tremendous pitching in the second game helped the Seawolves come away with the win.

On April 5 the Sonoma State Seawolves were handed their biggest home loss of the season as the San Francisco State Gators defeated them 12-1.