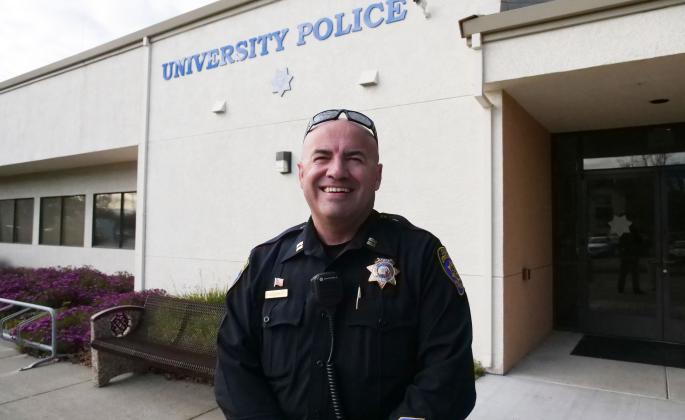 Chief Dougherty's swearing in ceremony is Aug. 9 at 4 p.m. // Photo by Francisco Carbajal

Sonoma State University President Judy K. Sakaki has announced that, after a nationwide search, David Dougherty has been appointed as the new Chief of Police for the university. Dougherty is a long-time member of the university police force who has served as the interim chief of police at SSU since May 2016.

“Dave is a highly qualified law enforcement professional who has served the university with distinction for 13 years,” said Sakaki. “We are fortunate that he is already a familiar presence on campus, having risen through the ranks of the University Police Department as patrol officer, sergeant, lieutenant, captain, acting chief, interim chief and now chief.”

Chief Dougherty’s professional experience includes eight years of working in management within the civilian private sector. Chief Dougherty regularly holds events such as “Coffee with the Chief” where the SSU community has an opportunity to visit, ask questions and mingle with Dougherty and his team. He is trained in a spectrum of professional areas including budget coordination, staff development, media relations and activation of Emergency Operations Centers. Some of these skills were on display during such recent emergencies as the fires in October, which forced the closure of the campus for nine days. “During these times, Chief Dougherty provided steady and effective leadership for the police department and campus,” said Sakaki.

Joyce Lopes, Vice President for Administration and Finance, noted, “Chief Dougherty is respected for his work in building relationships and collaboration among individuals and groups throughout the University.  We are fortunate to have a chief who is dedicated to community policing.”

Dougherty said he is “humbled by the opportunity to serve as the Chief of Police” and looks forward to finding new ways to connect with the community and all who live, work and study on campus. “All we need to do is take time to get out from behind a desk or the steering wheel of a patrol vehicle to listen and to engage our community in meaningful dialogue in support of a safe environment that is conducive to student success and faculty and staff accomplishments,” he said.

The official swearing-in ceremony for Chief Dougherty will occur on Aug. 9 at 4 p.m. in the third-floor ballroom of the Sonoma State University Student Center.

ABOUT US: With a student population of 9,400, Sonoma State University is unique in its liberal arts and sciences mission with a longstanding tradition of promoting intellectual and personal growth, leadership opportunities and technological proficiency. We cultivate a community in which a diverse population can learn and work in an atmosphere of civility and respect. We encourage innovation, experimentation and creativity, as well as contributions to equity and inclusion, in the pursuit of excellence for all members of our university community. See more news from SSU athttp://news.sonoma.edu/

(ROHNERT PARK) David B. Dougherty, a 13-year veteran of the Sonoma State Police Department, was officially sworn in Thursday as the university’s new police chief, overseeing a department of 14 sworn officers who provide police protection 24 hours a day, seven days a week for the...