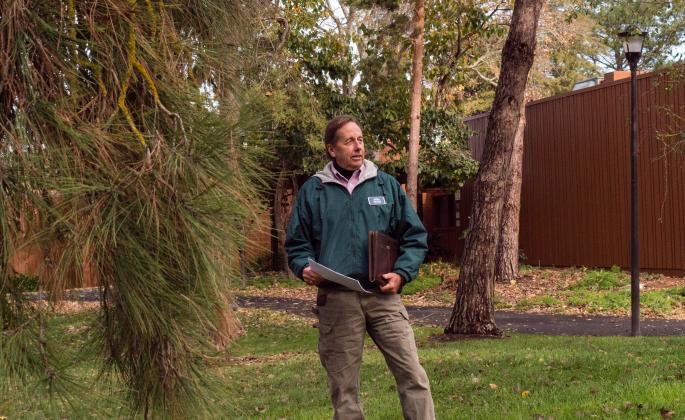 Landscape manager at Sonoma State Allan J. Goff stands by a cottonwood tree near the Art Building now removed due to its brittle limb structure. For every tree removed, an attempt will be made to replace it with a new one, either in the same location, or somewhere else on campus.

Sonoma State University is widely known for its lush greenery and acres of towering trees, many of which are as old as the campus itself. In an effort to keep the campus canopy clean and healthy, the university is using the winter break to thin trees with heavy foliage and remove others in key areas that could present a safety risk. As part of our tree care efforts, Sonoma State will commit to a “one-for-one” tree program. Meaning, for every tree removed, an attempt will be made to replace it with a new one, either in the same location or somewhere else on campus.

Over the coming weeks as part of SSU’s ongoing Pro-Active Tree Care Program, crews will remove dead or dying trees, as well as thin and shape tree canopies to reduce impact of wind. On Monday, Dec. 16, a work crew hired by the university started removing a set of cottonwoods by the campus Art Building due to the brittle limb structure of this tree species. That work will be followed by the removal of another cottonwood tree near the Health Center that is past its normal life cycle.

“We are being proactive more than anything with this project,” said Allan J. Goff, landscape manager at Sonoma State. “Removing these trees is not for aesthetic purposes but rather to make sure all of our trees are safe for those on campus.”

The work is scheduled to continue until Jan. 13, with a new set of trees being worked on each week until then. Starting Dec. 23, crews will begin work on oak trees near Salazar Hall and the library, cedar and pine trees near the gymnasium and cypress and arbutus trees in Medoc in the Beaujolais Village residential community.

In early 2020, Sonoma State’s Landscape Services is planning to plant several trees near the sidewalk intersection at the lawn near Person Theatre as well as new evergreens near the amphitheater itself, Goff said. “These new trees will replace trees that were removed for safety reasons earlier in the year,” he added.

As part of the program, Goff said he also will take inventory of the university’s more than 8,000 trees, resulting in a database where each tree will be assigned an ID number with detailed information about its status. This will help to track the work done on each tree as well as its condition.

Goff said he hopes by 2021 to have completed the primary deferred maintenance care projects and thus be able to begin an annual preventive maintenance approach for specific tree varieties. Any questions, suggestions or concerns should be directed to Facilities Management at (707) 664-2317.

Sonoma State bans use of glyphosate products such as Roundup
December 9, 2019

In keeping with Sonoma State’s expanded commitment to sustainability, the university has banned all glyphosate-based chemicals on campus, including those used in weed-killing products such as Roundup. Instead, Sonoma State will primarily use organic-based herbicides on its 269-acre...