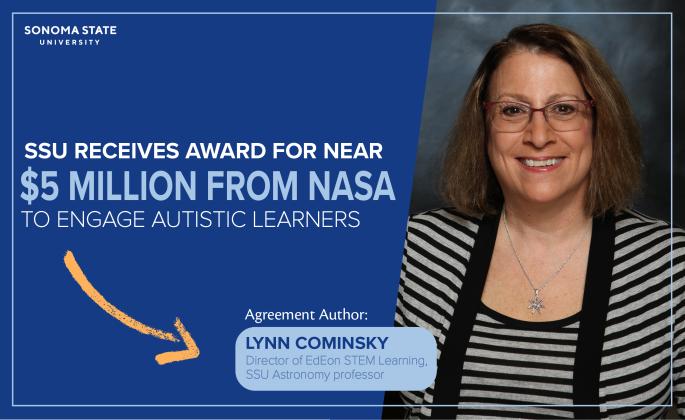 Rohnert Park, CA — Sonoma State University has been awarded $4.96 million from NASA to design and implement a program that will engage students on the autism spectrum in informal STEM learning.

NASA’s Neurodiversity Network (N3) aims to broaden participation in NASA programs to include autistic and other learners with neurological differences. As part of NASA’s Science Activation Program, which is composed of teams across the nation to help learners of all ages and abilities do science, N3 will use specific learning modules to support autistic learners with the social and technical skills needed for successful STEM careers.

“I really got inspired to pursue this opportunity because everywhere I turn there seems to be autism,” said professor Lynn Cominsky, who authored the cooperative agreement application and is also the director of EdEon STEM Learning at SSU – a center meant to inspire students to pursue STEM careers. “NASA has done so much for every other demographic group, but this award is very important because research has shown how autistic learners can be so talented in STEM fields.”

Over a five-year period, hundreds of high school autistic learners in both California and New York City will engage in informal NASA activities, including building and launching rocket payloads and using SSU’s NASA funded telescope. One of the California high schools that will participate in the program is the Anova Center for Education in Santa Rosa.

“Anova is proud to be a founding partner in the NASA Neurodiversity Network along with Sonoma State University and several other excellent Bay Area schools,” said Andrew Bailey, the founding director of Anova. “Autism can be a valuable type of 'neurological diversity' when the autistic individual is able to participate in the pursuit of happiness unhindered by the disabling roadblocks of a divergent mind. The N3 project is an exciting opportunity for our Anova students and the entire autism community."

As part of the program, NASA will provide subject matter experts to work as mentors for sets of students that are highly motivated in working with the curriculum. “By introducing students to NASA science, autistic learners will not only gain knowledge for future accomplishments in STEM, but it will also promote growth in their social skills and self-efficacy,” Cominsky said.

Among the program’s special consultants is Dan Swearingen, one of Cominsky’s former students from more than 25 years ago. Swearingen, who himself is autistic as well as his son, founded a program to help young adults with autism or other neurological differences to ease their transition to an independent adulthood.

“The staff and students at Autistry are excited about the NASA Neurodiversity Network,” said Dan Swearingen, who co-founded Autistry Studios with his wife Janet Lawson in Marin County. “This is a fabulous opportunity, and a rare one, for autistic students to explore STEM learning. Dr. Cominsky’s energy and ability to inspire scientific curiosity put me on the path to pursue astrophysics, and I am confident she will give this gift to our students as well.”

Other partners in the N3 team are Wendy Martin and Ariana Riccio from the nonprofit Education Development Center; Sylvia Perez and Georgette Williams from the New York Hall of Science; and Laura Peticolas, EdEon's Associate Director. Along with Anova, other Bay Area high schools will also be participating as partners, including Oak Hill School in San Anselmo, Stanbridge Academy in San Mateo, and the Orion Academy in Moraga. The internship program that N3 will be implementing was inspired by the successful program at Orion that partners their students with scientists from the Lawrence Livermore National Laboratory in STEM-related projects.

The program began this month with the NASA Kickoff meeting for the SciAct program. Cominsky said they are currently co-developing NASA resources with autistic learners to ensure they create learning opportunities that meet their needs. For more information about NASA’s Science Activation Program, visit https://science.nasa.gov/learners.

(Rohnert Park) — A student-built satellite about twice the size of a Rubik’s Cube has passed a series of tests to travel to space this December as part of a NASA-funded project involving three universities including Sonoma State. Built in partnership with Santa Clara University and Morehead...