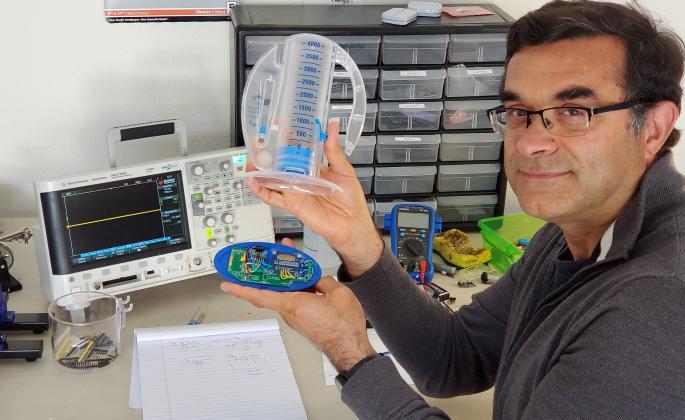 A friend of Sonoma State University professor Farid Farahmand lay in a hospital bed at the Redwood City Kaiser Permanente Neurology Center in November 2016. Recovering from surgery to treat bleeding in his head, he was instructed to use an incentive spirometer, a handheld breathing device that measures how deeply a patient can inhale, which helps prevent respiratory issues.

Farahmand jokingly asked if he used it, following instructions from his doctor and many others to patients recovering from surgery. “Yes,” his friend said, but clearly lying.

The problem with incentive spirometers, according to Farahmand, chair of the Department of Engineering Science, is that many patients don’t use them or simply forget. “What if I made something that reminded you to use it and even did more than that?” he asked his friend.

Fast forward three and a half years later, and Farahmand’s idea has come to fruition. With the help of the Advanced Internet Technologies in the Interests of Society Laboratory in Sonoma State’s Department of Engineering Science, he has created InSee, a patented prototype device that may help to encourage patient compliance of incentive spirometers, including those recovering from severe cases of COVID-19.

Named InSee to represent “seeing” the results of a spirometer, Farahmand said the device will remind patients to use their spirometer, monitor how often they use it and record how much air they move with each breath. Using a red, blinking light, InSee automatically reminds the patient to use the device at the frequency set by the doctor, and the only way to shut off the light is by reaching the target volume number set by the doctor as well. The device also records how long it took for the patient to reach the target and how many times they failed.

Farahmand said the project is a testament to the curiosity of the real-world thinkers at Sonoma State.

“This collaborative project involving our young student engineers, local entrepreneurs, and external collaborators is yet another testament to our strong commitment at Sonoma State University to both education and research, and tying them with real-word applications,” said Farahmand, who is also director of the lab. “I’m extremely proud that we’ve come this far, and I’m looking forward to the work ahead.”

Farahmand said the InSee project was officially underway for almost a year, but it was a doctor who encouraged him to speed things up when the COVID-19 pandemic began — none other than his brother. An M.D. and regional medical director in Texas, Alex Farahmand has worked alongside Farid throughout the entire InSee process and saw first hand how easy it was for patients recovering from the virus to not do their breathing exercises.

“Spirometers have been around forever, but there is not a single device that tracks patient compliance of them,” Alex said.

InSee was granted a U.S. patent in April, and Alex said they hope to receive funding soon to build around 200 units and begin clinical trials. Pending approval from the Institutional Review Board, trials will take place at HCA Gulf Coast Hospital in Houston and Houston Methodist Hospital. “It just feels great to know we can move forward,” said Alex.

Members of the SSU Advanced Internet Technologies in the Interests of Society Laboratory are committed to working on projects that are innovative and sustainable to educate future environmentally responsible and skilled engineers. Farid said this project exemplifies the work of the lab and the engineering department as a whole.

“The engineering program at SSU strives to combine fundamentals and hands-on training and to focus on developing technologies that matter the most to sustainability and improving the human condition,” Farid said.  “Through this rigorous training we make sure our students are put in a unique position to stand out and become the best engineers they can be.”

For more information about what SSU is doing to innovate and create a sustainable future, visit the Department of Engineering Science and the Advanced Internet Technologies in the Interests of Society Laboratory.

A Kicking-and-Throwing Machine Gives New Life to a Teen with Cerebral Palsy
January 18, 2012

Farahmand makes sure his new engineering students develop designs that have a real world...