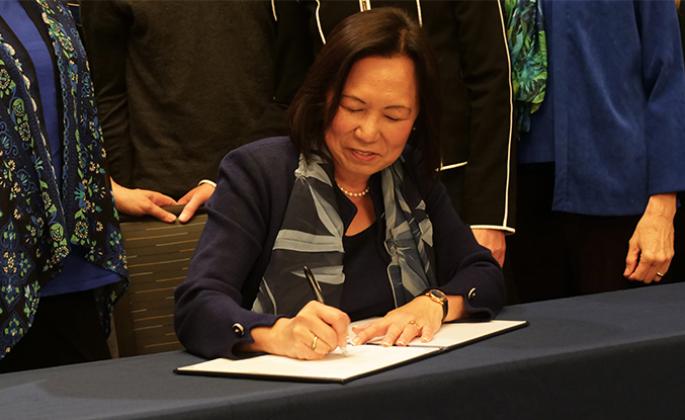 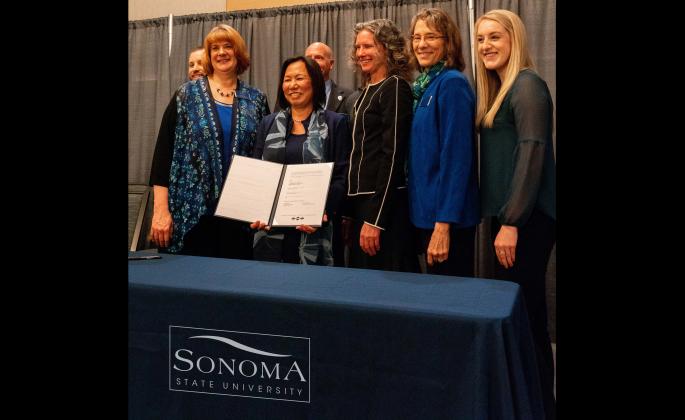 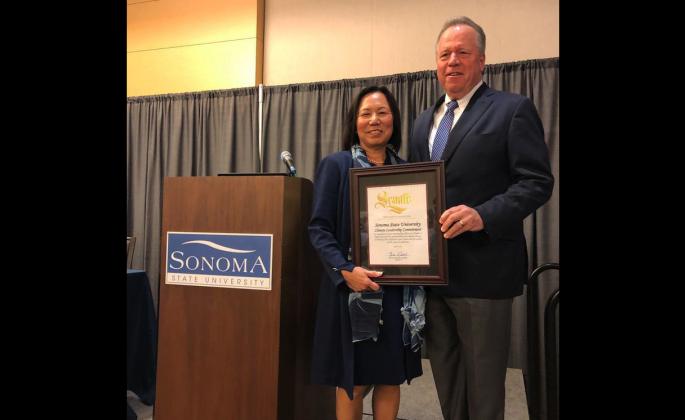 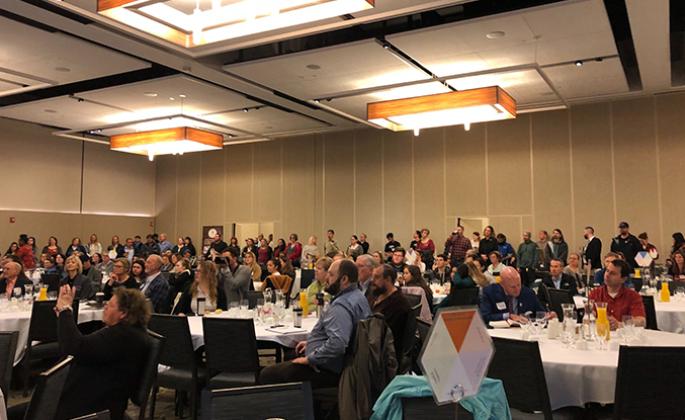 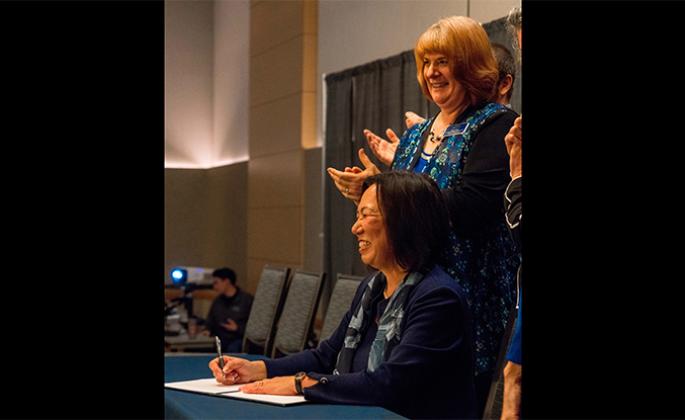 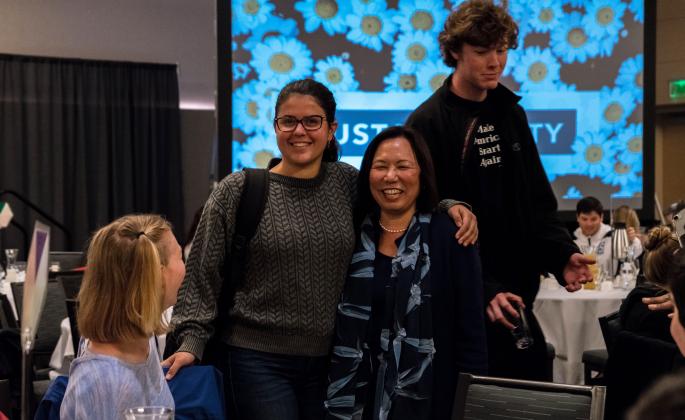 (Rohnert Park) – Before a crowd of nearly 300 people, Sonoma State President Judy K. Sakaki on Friday signed the landmark “President's Climate Leadership Commitment," a comprehensive roadmap for mitigating and adapting to a changing climate, one that sets high goals of sustainability for the university.

“Sonoma State is a long-standing leader in sustainability,” Sakaki said during the signing ceremony. “Our students themselves - often in partnership with our faculty and staff - have harnessed their tremendous energy and vision to make our campus greener, and to make our university a national model for sustainable practices.”

In addition to achieving new standards for sustainability on campus, “we need to stay committed to the curiosity, to the ethics and to the drive that have generated the sustainable solutions we’ve created so far,” she said.

Moments later she put her signature to the Climate Leadership Commitment, a document first adopted by 12 universities in 2006. With leaders from the student body, campus and the community behind her, Sakaki then raised her hand in celebration. “Let’s get started,” she said as the room erupted in applause.

“My hope is that the signing of this commitment is not just a pledge to the text of the document, but serves as further notice that we can achieve the bright future we all want for Sonoma State ,“ said Carley Chatterley, president of Associated Students during the ceremony. “It is days like today that I am most proud to be a Seawolf.”

Claudia Luke, director for the Center for Environmental Inquiry at Sonoma State, explained to the audience that the university is committing to carbon neutrality and to collaboratively building resilience in face of climate change. But more than anything, she said, it is making a commitment to students. “We are committing to teaching skills and creating experiences that you need to build successful careers in a time of unparalleled change,” she said.

Under the principles of the agreement, the university will be pledging to adopt a Climate Action Plan that calls for achieving carbon neutrality for electricity-powered campus operations by 2045. The commitment also calls for integrating sustainability and resilience into curriculum and research while setting target dates for completing a baseline inventory of Sonoma State's carbon footprint by year one and writing a Climate Action Plan by year three.

Prior to the signing, Logan Pitts, field representative to state Sen. Bill Dodd, D-Napa, and a Sonoma State graduate, presented President Sakaki with a Certificate of Recognition from the California Senate commending the university for its “outstanding efforts as a leader in higher education on sustainability and climate change.”

The signing took place at the beginning of the 14th Annual Sustainable Enterprise Conference Friday on campus, which drew educational, business, government and community leaders from throughout the North Bay. The focus of the one-day event was on "pathways to economic, social and environmental resilience." Senator Dodd presented the keynote address for the conference, which included panel discussions and workshops on such topics as The Green New Deal, equity, government leadership and sustainability and “Building resilience in a fire-prone landscape.”

(Rohnert Park) — With a goal of overseeing and advancing Sonoma State’s stepped-up commitment to sustainability and building resilience, the newly formed President’s Sustainability Advisory Council convened its first meeting on Oct. 26. The meeting took place a day before the campus was closed...