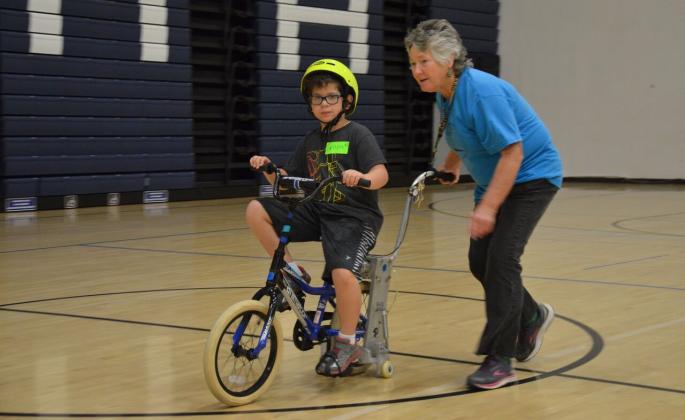 Elaine McHugh, professor emeritus at Sonoma State University, created the “Cycle Without Limits” bike camp in 2001 to help children with special needs learn how to ride a conventional two-wheel bicycle. The inaugural camp was held at SSU, and the university has hosted the event ever since. This year, it will be celebrating its 20th anniversary.

“With other sports and activities there has to be adaptations for how children with disabilities participate, but if you can ride a bike you’re just like the other kids,” said McHugh. “SSU has been an essential partner over the years, and this has been such an excellent collaboration.”

Partnered with the United Cerebral Palsy of the North Bay, Sonoma State will present the annual “Cycle Without Limits” winter bike camp from Jan. 17-20.

The camp has seen improvements over the years. Beginning in 2012, UCP volunteer Dennis Blong, a retired pneumatics engineer, designed a fleet of bicycles that use air cylinders to keep the riders safely upright instead of training wheels. Blong said the previous set of bicycles used during the camp were restrictive and weren’t accessible to all students. With Blong’s design, as the rider’s skill develops over the course of the camp, volunteers can gradually reduce the air pressure until the rider is riding on their own.

“By the end of the third day, almost all of the riders can use a real bike,” said Blong. “It's almost inevitable that you can see the children ride around campus after the final day with their families. It's such a great and meaningful event.”

For Blong, his connection to children with special needs hits closer to home than most due to his daughter being diagnosed with cerebral palsy. “When you have a family member affected it’s not the same,” said Blong. “You’re involved every day of your life, and it was no brainer based on my experience to do what I can to help other kids.”

McHugh began working with special needs children in the 1970s teaching adaptive P.E. to younger students in Marin County. “Every student was a new challenge and provided a new goal, and it really connected with me as an area of interest,” she said.

The camp begins Friday, Jan. 17 at Sonoma State’s Gymnasium. Costs for the camp and registration forms can be found at United Cerebral Palsy. Limited scholarships are available. A summer edition of the camp will be offered in June at SSU. The five-day camp includes a swim instruction session for children with disabilities.

Watch the winter camp in action.

The Cycle Without Limits bike camp for children with special needs will be held January 12-15 at Sonoma State University. The camp uses specially-designed bicycles to teach children who often have difficulty learning how to ride a conventional two-wheeled bicycle.

The bikes use air...

Cycle Without Limits in action once again at Sonoma State University
January 11, 2019

“I was aware that riding a bike was a skill that is critical...

The Cycle Without Limits summer bike and swim camp at Sonoma State University will teach children with special needs how to ride bicycles June 13-17. These children often have a history of difficulty learning how to ride a bike using traditional methods.