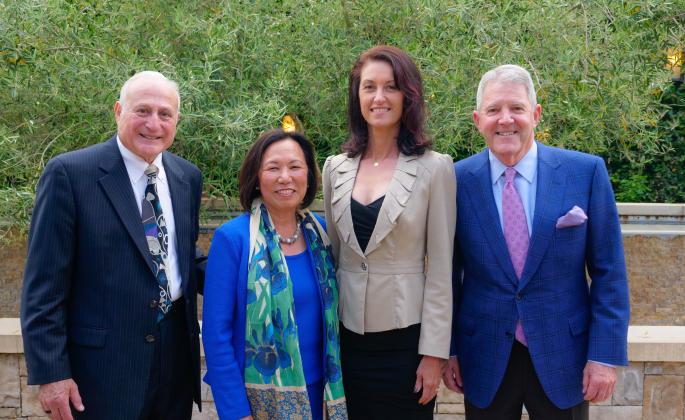 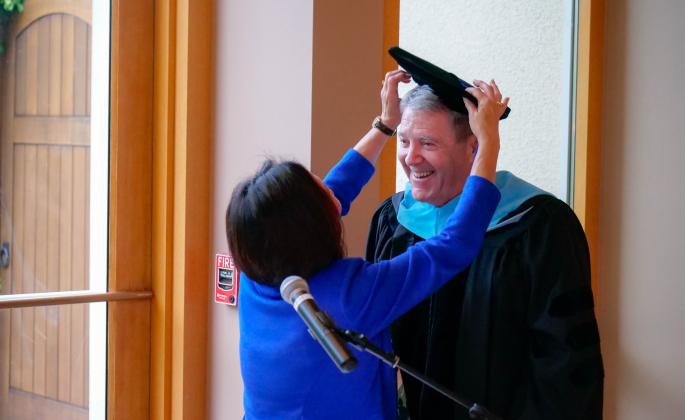 Henry Hansel is hooded by President Judy K. Sakaki in recognition of his honorary degree of Doctor of Humane Letters to be conferred during the School of Arts and Humanities commencement ceremony on Saturday, May 18. 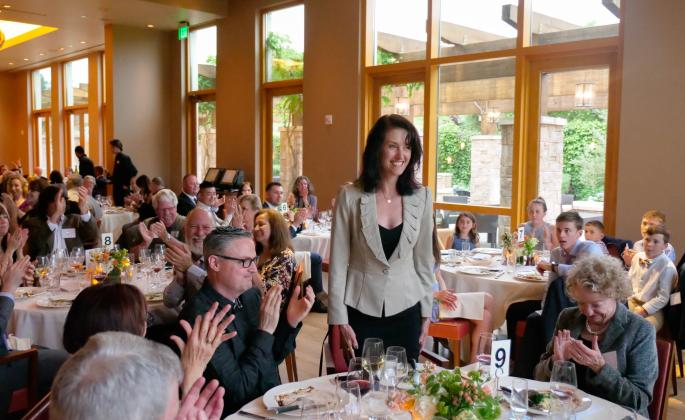 Natalie Cilurzo, who owns Russian River Brewing Company with her husband Vinnie Cilurzo, was the first of the Distinguished Alumni to be honored at the dinner. 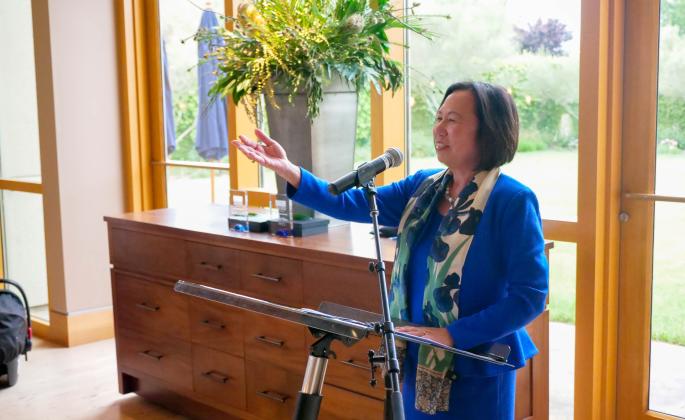 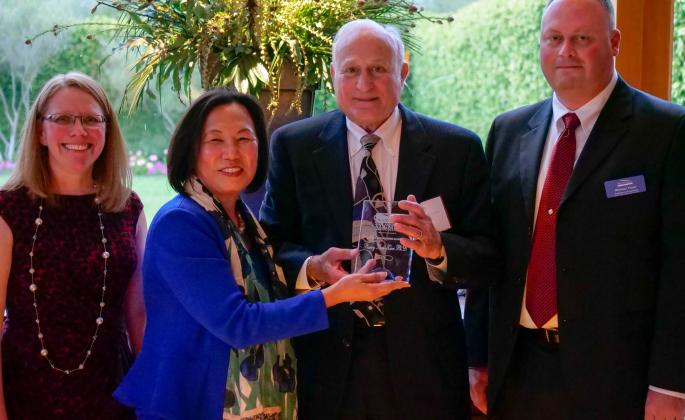 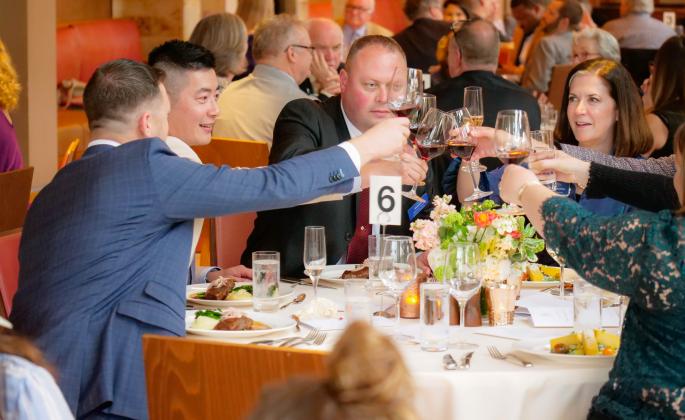 As of 2018, Sonoma State has awarded honorary degrees to 32 recipients. 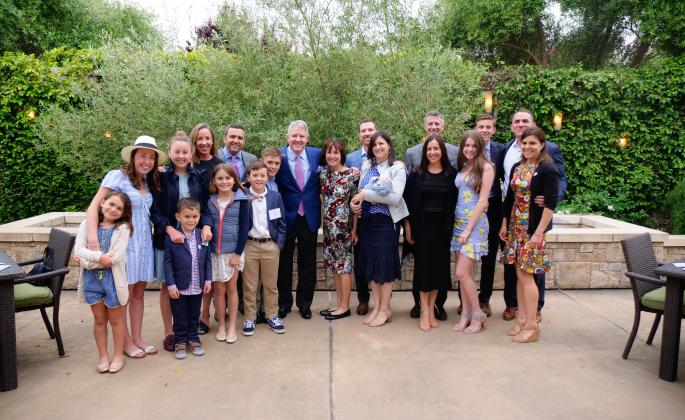 Henry Hansel with his family at the President's Recognition Dinner. 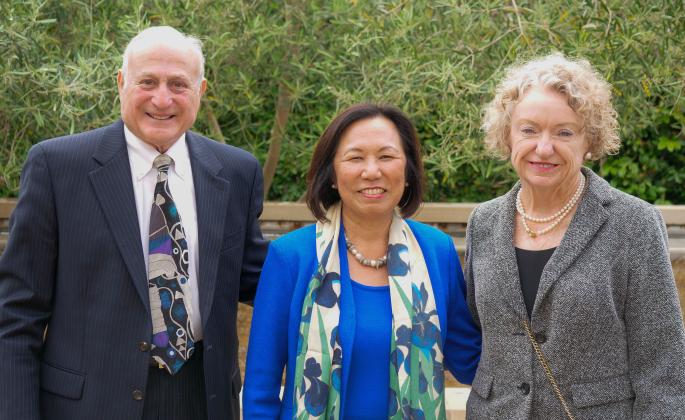 Distinguished Alumnus Barry Ben-Zion (left), along with his wife Gail (right), endowed a scholarship in 2006 for economics majors who were born outside the United States. 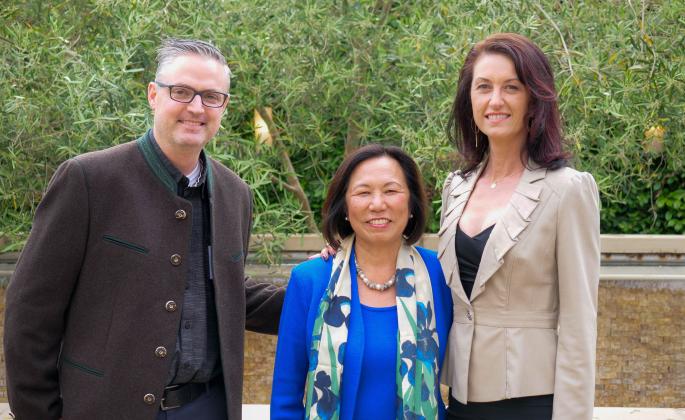 “As President of Sonoma State, I’m honored to have the opportunity to recognize the remarkable achievements of the three amazing, one-of-a kind individuals,” said President Judy K. Sakaki during the dinner at the Green Music Center’s Prelude Restaurant. “Each one of you serves our university community as a model of professional accomplishments and commitment to the success of others.”

First among the honorees was Cilurzo who received her B.S. in business administration from Sonoma State in 1998. In 2004, she and her husband Vinnie Cilurzo opened the Russian River Brewing Company brewpub in downtown Santa Rosa and soon started brewing their now legendary Pliny the Younger. Sampling the “Younger” has since become something of a pilgrimage for beer fans from all over the world and had an estimated $4.16 million economic impact on Sonoma County in 2019 alone.

In addition to her work managing the business operations of the brewery, Natalie Cilurzo has helped raise more than $600,000 for local breast cancer charities. In addition, she and her husband partnered with King Ridge Foundation and 60 craft breweries worldwide to raise relief funds following the October 2017 fires. Sales of the Sonoma Pride brand raised more than $1.1 million for fire victims.

“This is a huge and very unexpected honor,” said Cilurzo as she received the award from one of her former professors, Armand Gilinsky, the F.J. Korbel & Bros. Professor of Wine Business at Sonoma State, while family members and employees looked on.

Also honored was Dr. Ben-Zion, a native of Israel, who became the first SSU graduate to major in economics when he finished in 1965. After receiving his B.A., he earned both an M.A. and a Ph.D. in economics from the University of Oregon. In 1969, he became the first Sonoma State graduate to be appointed a full-time professor. He taught economics at Sonoma State for 30 years before retiring in 2000. He also earned widespread respect in the legal community for his work as a forensic economist, something he has continued to do in retirement.

“I am honored and proud to be Sonoma State graduate,” said Dr. Ben-Zion, who, along with his wife, Gail Ben-Zion, endowed a scholarship in 2006 for economics majors who were born outside the United States.

Hansel, president of the Hansel Auto Group, is a respected business leader in the North Bay and around the state. Since 2012, he has served on Sonoma State University’s Board of Advisors for the Green Music Center and currently serves as board chair. Since the tragic wildfires of 2017, Henry also has immersed himself in Rebuild North Bay, traveling to Sacramento and Washington, D.C. with local leaders to advocate on behalf of recovery efforts in the region.

Hansel said he was “speechless,” when he was told that he was selected to receive the honorary degree. “At my house now, I am sort of referred to as Dr. Hansel,” he said with a smile.

Hansel was selected by the Board of Trustees of the California State University to receive an honorary degree of Doctor of Humane Letters, which will be conferred during the School of Arts and Humanities commencement ceremony on Saturday, May 18.

As of 2018, Sonoma State has awarded honorary degrees to 32 recipients. Since 1988, the Distinguished Alumni Awards Program, coordinated by the SSU Alumni Association, has recognized prestigious graduates for their professional accomplishments, community contributions and support of the university. For more information about the Alumni Association, go to www.ssualumni.org.

(Rohnert Park) — The Federated Indians of Graton Rancheria have agreed to make a $2.85 million gift to Sonoma State University to improve and expand environmental education of the 450-acre Fairfield Osborn Preserve located on the northwest slope of Sonoma Mountain.