Sonoma State bans use of glyphosate products such as Roundup 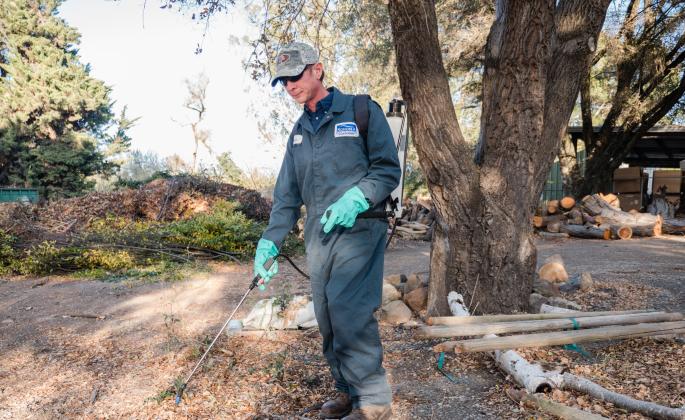 George Atkinson, a gardening specialist on campus, sprays an organic-based herbicide on a patch of broadleaf weeds on campus. 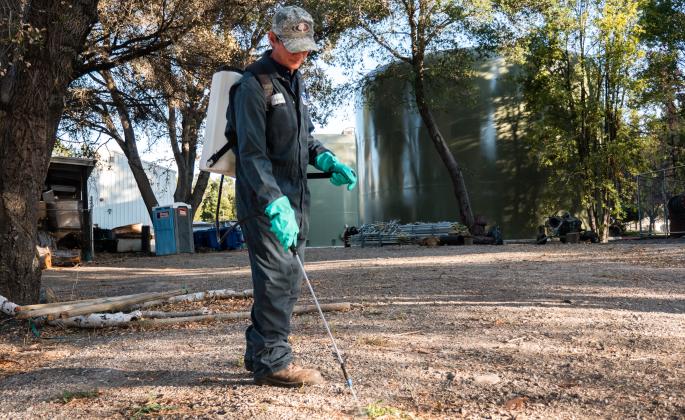 In keeping with Sonoma State’s expanded commitment to sustainability, the university has banned all glyphosate-based chemicals on campus, including those used in weed-killing products such as Roundup. Instead, Sonoma State will primarily use organic-based herbicides on its 269-acre campus in Rohnert Park.

Sonoma State University now joins the cities of Santa Rosa, Windsor and Sonoma as well as the county of Sonoma in banning or restricting the use of synthetic pesticides on public land. The city of Sonoma specifically banned glyphosate, a chemical suspected as a cancer-causing agent that also has a negative impact on the environment.

“We wanted to take a proactive approach to this issue,” said Allan Goff, who became landscape manager at Sonoma State three months ago. Goff was previously at Pepperdine University, where he worked to eliminate glyphosate-based chemicals on campus as well. Goff said that after talking with Judith Ford, head of strategic development in the Center for Environmental Inquiry, “we wanted to bring that momentum up here.”

According to Goff, the turning point to go organic was due to SSU Landscaping Services being able to exchange more than 30 gallons of glyphosate-based herbicide for an organic alternative. In response, Sonoma State has begun testing several organic-based herbicides to keep the university’s landscape weed-free, including one made from orange peel and another that smells of cloves and cinnamon.

“We’re not married to any product at this moment just the concept,” said Goff. “What will determine our decision is which product provides the quickest results and which is the most labor and cost-effective.”

“A critical feature of weed control is also the use of mulch,” said Craig Dawson, director of Operational Sustainability at Sonoma State. “Sonoma State already uses mulch and will expand the areas and thickness of it to help control weed growth and hold in moisture to reduce water use.”

Since these products are organic, Goff said they are also less aggressive in battling unwanted vegetation. “But we knew that going into it,” he said. “It's going to increase labor as well as additional material, however, the environment is worth it.”

This decision comes after Sonoma State President Judy K. Sakaki signed the Presidents’ Climate Leadership Commitment in April 2019 and announced the formation of the newly formed President’s Sustainability Advisory Council at the start of the 2019 fall semester, which convened its first meeting on Oct. 26.

Goff said the university will continue to test the organic options and will select the best performer prior to the spring growing season.

Sonoma State University is hosting a jam-packed schedule of events throughout the week of April 16 for a special Earth Day celebration that commend not only Earth friendly lessons but encourage diversity and community.  This year’s events range from lectures, film showings to even cooking and...