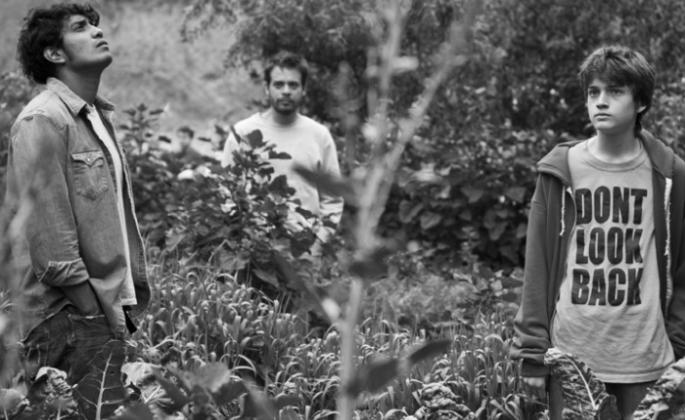 Still from the film "Güeros"

The season kicks off with the award-winning documentary "On Her Own," about Sonoma County farmer Nancy Prebilich and her family as they struggle to keep their fifth generation farm afloat during the recent recession. Prebilich will be present at both screenings to introduce the film and answer questions afterwards.

Also showing is the locally produced "Project Censored The Movie" about the long-running SSU media project that celebrates its 40th anniversary next year. The filmmakers, Sonoma residents Doug Hecker and Christopher Oscar, will be joined by Project Censored Director Mickey Huff for discussion after the film.

SFI celebrates American independent cinema with two rare revivals, "Farewell To Manzanar" and "Losing Ground." "Farwell To Manzanar" is adapted from the book by Jeanne Watatsuki Houston about her family's confinement in an internment camp for Japanese-Americans during the Second World War. The filmmaker, Academy Award winner John Korty, will be present to introduce the film and answer questions at the Friday screening.

The newly restored version of one of the first films written and directed by a black woman, Kathleen Collins's Losing Ground, is a groundbreaking romance from 1982 exploring women's sexuality, modern marriage and the life of artist and scholars.

International features in the program include the Academy Award Nominated film from Estonia, "Tangerines"; "Güeros," a film from Mexico by newcomer Alonso Pacios that follows three restless teens during the student strikes of 1999; "Court," a profoundly moving drama that unfolds within the Indian legal system; and "My Friend Victoria," a French film based on a story by Nobel laureate Doris Lessing.

The Sonoma Film Institute also takes a look back at two film artists celebrating their centenaries this year: "Journey To Italy," with Ingrid Bergman in one of the three films she made with Italian director Roberto Rossellini; and Frank Sinatra in Vincente Minnelli's glorious 1958 cinemascope melodrama "Some Came Running."

All screenings are in Warren Auditorium, Ives Hall on the Sonoma State University campus in Rohnert Park. Suggested ticket donation is $5 and there is a $5 parking fee on campus.

Friday, Sept. 4 at 7 p.m. and Sunday, Sept. 6 at 4 p.m.
"On Her Own"
(Morgan Schmidt-Feng, 2015) Documentary on Sonoma County Farmer Nancy Prebilich and her family as they try to keep their 5th generation farm afloat during the recent recession. Nancy Prebilich in attendance.

Friday, Sept. 11 at 7 p.m. and Sunday, Sept. 13 at 4 p.m.
"Farewell To Manzanar"
(John Korty, 1976) Adapted from the book by Jeanne Wakatsuki Houston about her family's confinement in an internment camp for Japanese-Americans during the Second World War. Filmmaker John Korty in attendance.

Friday, Sept. 18 at 7 p.m. and Sunday, Sept. 20 at 4 p.m.
"Still Dreaming"
(Hank Rogerson and Jilann Spitzmiller, 1914) Documentary about group of former Broadway stars in an assistive living facility diving into a production of "A Midsummer Night's Dream."

Friday, Sept. 25 at 7 p.m. and Sunday, Sept. 27 at 4 p.m.
"Tangerines"
(Zaza Urushadze, 2013, in Estonian, Russian, Georgian w/English Subtitles) Pacifist drama set in 1992, during the conflict between Georgia and Abkhazia. Co-sponsored by the United Nations Association of Sonoma County

Friday, Oct. 2 at 7 p.m. and Sunday, Oct. 4 at 4 p.m.
"Project Censored The Movie"
(2013) Documentary on the longest-running media research project in the country. The filmmakers, Sonoma residents Doug Hecker and Christopher Oscar, will be joined by Mickey Huff, Project Censored Director, and some current interns on the project, for a discussion after the film.

Friday, Oct. 9 at 7 p.m. and Sunday, Oct. 11 at 4 p.m.
"Court"
(2014, Chaitanya Tamhane, in Marathi, Hindi, English and Gujarati with English subtitles)
Winner of top prizes at the Venice Film Festival, this moving drama unfolds within the Indian legal system.

Friday, Oct. 16 at 7 p.m. and Sunday, Oct. 18 at 4 p.m.
"Losing Ground"
(1982, Kathleen Collins) Groundbreaking romance explores women's sexualty, modern marriage and the life of artist and scholars. One of the first films written and directed by a black woman.

Friday, Nov. 6 at 7 p.m. and Sunday, Nov. 8 at 4 p.m.
"The Cut"
(2014, Fatih Akin, in Arabic, Kurdish, Armenian and Spanish) Historic epic follows one man's journey through the Ottoman Empire after surviving the 1915 Armenian genocide.

Friday, Dec. 4 at 7 p.m.
"Some Came Running" (Frank Sinatra Centenary)
(1958, Vincente Minnelli) Sinatra, Dean Martin and Shirley MacLaine star in the glorious, larger than life melodrama that is one of the highlights of Hollywood filmmaking in the 1950's.