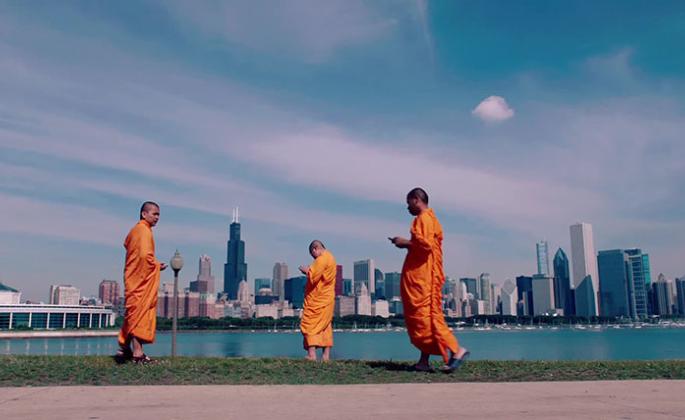 A still from Werner Herzog's "Lo and Behold, Reveries of the Connected World"

"Lo and Behold" engages with cyberspace pioneers such as Tesla and Space-X co-founder Elon Musk, Internet protocol inventor Bob Kahn, and famed hacker Kevin Mitnick in provocative conversations that reveal the ways in which the online world has virtually transformed how everything in the real world works--from business to education, space travel to healthcare, and the very heart of how we conduct our personal relationships.

In addition to screening several award-winning documentaries and films from around the world, SFI is co-sponsoring with the Green Music Center the West Coast premiere of the restored version of "Kalpana." The sole film of celebrated Indian dancer Uday Shankar (older brother of sitar virtuoso Ravi Shankar), "Kalpana" is a vibrant dance-drama that revolves around a young dancer's dream of forming his own dance academy. Originally filmed in 1948, the film was restored in 2008 by Martin Scorsese's World Cinema Project in association with the family of Uday Shankar and the National Film Archives of India.

Friday, Jan. 27 at 7 p.m. and Sunday, Jan. 29 at 4 p.m.
Lo and Behold, Reveries of the Connected World (Werner Herzog, 2016) Landmark documentary that chronicles the virtual world.

Friday, Feb. 3 at 7 p.m. and Sunday, Feb. 5 at 4 p.m.
Lupe Under the Sun (Lupe Bajo el Sol) (Rodrigo Reyes, 2016, in Spanish and English with English subtitles) Independent feature about a migrant laborer in California's Central Valley.

Friday, Feb. 10 at 7 p.m. and Sunday, Feb. 12 at 4 p.m.
Original Copy (Directed by Georg Heinzen and Florian Heinzen-Ziob, 2015, in Hindi and English w/English subtitles) Charming documentary portrait of artist and guru Sheikh Rehman - one of the last hand-painters of colorful Bollywood posters.

Friday, Feb. 24 at 7 p.m.
Lamb (Yared Zeleke, 2015, in Amharic w/English subtitles) A young Ethiopian boy tries to save his sheep from being sacrificed. Co-Sponsored by the United Nations Association of Sonoma County.

Friday, March 24 at 7 p.m. and Sunday, March 26 at 4 p.m.
Soul on a String (Zhang Yang, 2016, in Tibetan w/English subtitles) Mystical epic about a killer on the run who is entrusted with a sacred mission.

Friday, March 31 at 7 p.m. and Sunday, April 2 at 4 p.m.
Forever (Heddy Honigmann, 2007, in French w/English subtitles) Touching documentary on the people who visit the graves of the famous at Pere Lachaise Cemetery in Paris.

Friday, April 14 at 7 p.m. and Sunday, April 16 at 4 p.m.
The Groove Is Not Trivial (Tommie Del Smith, 2016) Lively documentary on the internationally renowned Scottish fiddler Alasdair Fraser. Filmmaker Tommie Dell Smith will introduce the film and answer questions after the Friday screening.

Friday, April 21 at 7 p.m. and Sunday, April 23 at 4 p.m.
The Wind Will Carry Us (Abbas Kiarostami, 1999, in Persian w/English subtitles) Profound film about a Tehrani camera crew visiting a small Iranian village.

May 5:
Primary (1960, 52 min.)Follows the Wisconsin primary election between John Kennedy and Hubert Humphrey for the Democratic nomination for President.

Adventures on The New Frontier (1961, 52 min.) Follows the newly-elected President in the White House as he conducts his daily business.

May 7:
Crisis (1963, 53 min.) Features both Kennedy brothers trying to maneuver around the University of Alabama integration crisis, with Governor George Wallace blocking the doors.

Faces of November (1963, 12 min.) A simple, wordless portrait of a traumatized nation after the assassination.