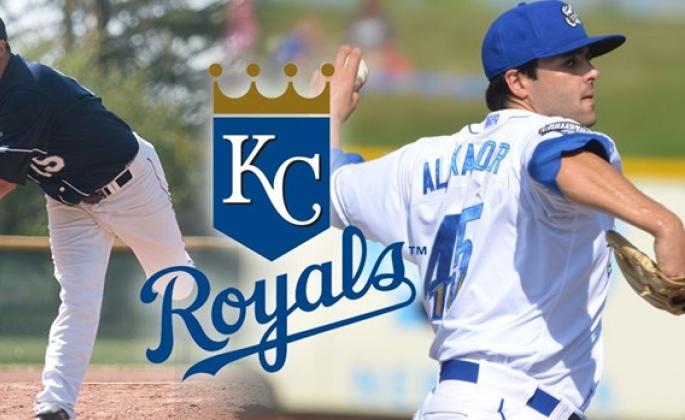 Former Sonoma State University baseball student-athlete Scott Alexander was called up from the Triple-A Omaha Storm Chasers on Tuesday to join the active 40-man roster of the Major League Baseball defending American League champion Kansas City Royals. Alexander played for Sonoma State for one season back in 2010 before being drafted by Kansas City as the 179th overall pick in the sixth round, a month after SSU's season ended.

Alexander becomes the fourth former SSU student-athlete to appear on an MLB roster, and the third previously coached by the Seawolves' John Goelz. A junior at Sonoma State in 2010, he elected to forego his senior season and sign a professional contract with the Royals organization. He was an All-CCAA Honorable Mention pick in his only season at SSU, sporting a record of 3-6 with a 4.50 ERA. His 70 strikeouts were a team-high and his opponent batting average of .209 was, at the time, the fourth-best in school history.

A native of Santa Rosa and former standout at Cardinal Newman High School, Alexander led the Triple-A Storm Chasers this season with a 1.03 WHIP among teammates with more than 15.0 innings pitched, adding a 2.56 ERA and a team-best 14 saves, 13 of which have come in his last 23 appearances. In fact, Alexander was named the Storm Chasers' Pitcher of the Month for both June and July, and led the Pacific Coast League during those two months with 12 saves. He also had a 20.0 scoreless innings streak that lasted from May 28 to July 9.

Tuesday's announcement comes as all Major League Baseball teams can expand their active rosters from 25 to 40, providing much-needed depth for the postseason stretch and a chance for some young prospects to get experience. Alexander joins a Kansas City ballclub that has all but clinched a 2015 American League Central title, as the first-place Royals -- with an AL-best 80-50 record -- hold a 13-game lead over second-place Minnesota with 32 games remaining in the regular season.

Alexander joins a growing list of former SSU student-athletes to have played at the MLB level, the first being Marshall Brant (1972-74), who played for New York Yankees in 1980-81 and for the Oakland Athletics in 1983. Most recently, pitcher Daniel Barone (2004) broke into the big leagues with the Florida Marlins in 2007 and Tommy Everidge (2002-04) spent time with the Oakland Athletics in 2009.

While Alexander makes the three-hour trip south to join the Royals for Tuesday's home game against Detroit, two other former SSU student-athletes remain on the verge of a big league callup -- O'Koyea Dickson of the Oklahoma City Dodgers, the AAA affiliate of the National League West-leading Los Angeles Dodgers, and Thomas Lee of the Memphis Redbirds, the AAA affiliate of the National League Central-leading St. Louis Cardinals. Both Dickson and Lee were members of Sonoma State's 2011 NCAA Division II West Region Championship squad.

Dickson, a native of San Francisco who played just one season (2011) at Sonoma State, is hitting .262 with 25 doubles, 12 home runs and 46 RBI in 109 games as a first baseman for Oklahoma City, which leads the Pacific Coast League's American Northern Division by three games with a PCL-best 81-55 record.

Lee, a right-handed pitcher from Bakersfield, Calif. who played all four of his collegiate seasons at SSU from 2009 to 2012, has been dominating opposing hitters since being called up to Triple-A Memphis on June 12, going 3-1 with a 1.62 ERA in six appearances (all starts), striking out 20, walking five and allowing just 38 hits in 39.0 innings of work.

The Sonoma State baseball program, and specifically 30-year head coach John Goelz, have long been known to produce professional ball players. Goelz, who has 1,001 career victories as the head coach of the storied SSU program, has seen 97 of his players sign professional contracts since his arrival in 1986 and, in the past 15 years, 61 players have been drafted or signed to play professionally.