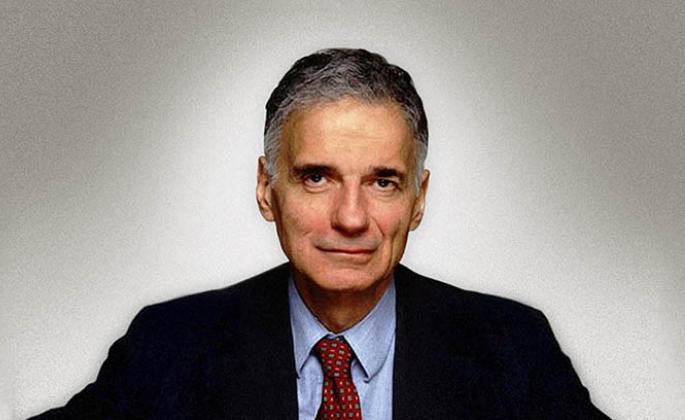 Nader will speak March 5 at 7:30 p.m. in Weill Hall of the university’s Green Music Center. His topic is “One Person Can Make a Difference: Social Justice and World Affairs.” Tickets are now available.

The lecture series hosted by the Green Music Center kicks off Social Justice Week, an annual event at Sonoma State University sponsored by the Sociology Social Justice and Activism Club and other campus groups.

Access, equity and other central themes of social Justice are at the heart of Sonoma State University’s mission, and a priority of the current administration. Dean of the School of Social Sciences John Wingard said the lecture series, made possible by the generosity of Andréa Neves and the late Barton Evans, is a critical component of the university’s efforts.

Andréa Neves said, “My husband, Bart Evans and I, have always been involved in issues of social justice. The lecture series is our attempt to bring to campus noted lecturers, researchers and the like, who ordinarily would not be available to our students and the SSU community because of the cost to bring them to campus. Thus far, we have been able to bring to campus 13 internationally known speakers such as Cornel West, Dolores Huerta and Jamaica Kincaid.  We hope to bring many more in the coming years.”

Nader’s analyses and advocacy have enhanced public awareness and increased government and corporate accountability for decades. His example has inspired a generation of consumer advocates, citizen activists and public interest lawyers, who in turn have established their own organizations throughout the country.

He first made headlines as a young lawyer in 1965 with his book “Unsafe at Any Speed,” a scathing indictment that lambasted the auto industry for producing unsafe vehicles. The book led to congressional hearings and the passage of a series of automobile safety laws in 1966. In his most recent book, “Breaking Through Power,” Nader draws from a lifetime waging—and often winning—David vs. Goliath battles against big corporations and the United States government.

One of his top priorities is defending the U.S. civil justice system. Corporate lobbyists and anti-consumer legislators have worked on both the federal and state levels to restrain consumers' rights to seek justice in court against wrongdoers in the area of product liability, securities fraud and medical negligence. Nader continues working to advance meaningful civic institutions and citizen participation as an antidote to corporate and government unaccountability.

Tickets for the Nader lecture are $15. Students with valid ID will be admitted free. Tickets are available online and at the university box office. For more information, please visit www.gmc.sonoma.edu  or call (866) 955-6040

(Rohnert Park) – Sonoma State University will host a joint hearing of the California Assembly and Senate Select Committees on the wine industry on Friday, June 28 at the Wine Spectator Learning Center. The meeting will begin at 1:30 p.m. and is open to the public.

In an interview before his lecture at Sonoma State University, Nader, now 84, remained an unwavering advocate of the...