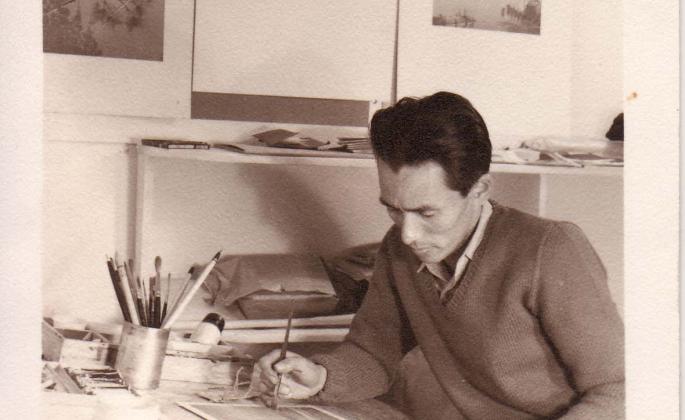 "We know a lot of people self-curate these materials in their homes, and we wanted a way to preserve, digitize and share their collections," says Dana Ogo Shew, an oral historian and staff archeologist at the Sonoma State University Anthropological Studies Center who is leading the project.

The project gained momentum after a panel discussion about the Japanese internment at Sonoma State last year drew a standing-room-only crowd from ages 15 to 90. Items to be digitized include photographs, documents, posters and three-dimensional objects. Audiovisual materials will be digitized on campus at the Anthropological Studies Center.

For two years during the Japanese internment of World War II, Amache was known for its silk screen shop, which produced over 250,000 posters for the U.S. Navy, in addition to other projects. Internees also carved their own furniture and artwork from discarded wood found at the barracks, and even made jewelry out of peach pits.

"They used what they had there and turned it into art," says Shew, a descendant of former detainees from the Topaz camp in Utah. "What I want to get out of this is the focus on the creativity and the art and the beauty that was created in this harsh, unforgiving landscape, and highlight how they made they best of it."

As Shew writes on the Densho Encyclopedia: "The shop gained national acclaim when it was highlighted in a full page spread in the April 1944 edition of the national advertising magazine, 'Signs of the Times.' The article credited the silk screen shop with contributing to the country's efficient war training program, not finding any irony that the silk screen shop's Japanese American employees were contributing to the navy while incarcerated behind barbed wire and that nearly all Japanese Americans that attempted to enlist in the navy, army air corps, or marine corps during WWII were rejected because of their Japanese heritage."

Anthropological Studies Center Director Adrian Praetzellis says it's important to preserve these historic pieces with as much first-hand knowledge as possible. "First-hand source gives a much richer context of these objects," he says. "This generation who went through the camps will not be here forever. It's really important that this be done now."

Scanned images will reside in the Amache Museum's digital image collection, and many will also be available to the public on the Amache Preservation Society website. Some images may also be added to Sonoma State University's special digital collection of Amache artifacts. A public event showcasing the collection is planned for fall 2016.

The Sonoma County Japanese Citizen's League is a partner in this project. Items will be digitized at a one-day-event taking place in Sebastopol in April. Those who have items to digitize or want more information can contact Dana Shew at (707) 664.3285 or shew@sonoma.edu.

Before the start of the fall 2018 semester, it was announced that the Writing Center, the Tutorial Program and the Supplemental Instruction Program would be combined into one convenient space for students and faculty. Located on the first floor of the University Library in the Jean and...