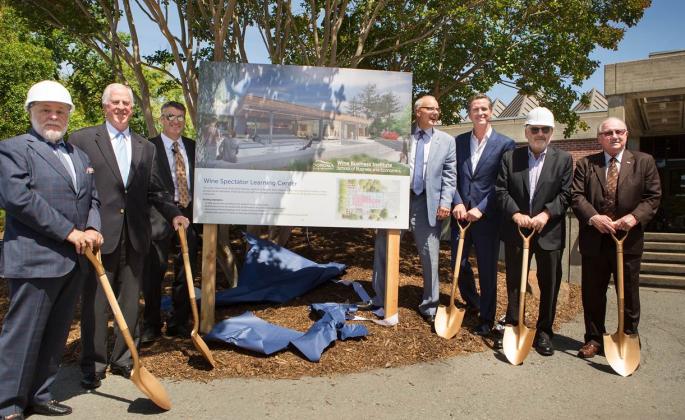 "We're tearing down the ivory tower of isolation and building a learning community," said Dean of the School of Business and Economics William Silver. "It will be one that will open our doors to the world for the career and life success of our students and for the economic prosperity of our communities."

Other speakers at the event included Lt. Governor and gubernatorial candidate Gavin Newsom, Rep. Mike Thompson, Wine Spectator Publisher Marvin Shanken and Sonoma State President Ruben Armiñana, who will retire June 30. The groundbreaking is a capstone of Armiñana's 24-year career as president. He had the idea for the program in 1992, his first year on campus, and it started in 1996.

Sonoma State University's Wine Business program has grown in its 20 years, now seeing more than 600 students annually. "The wine industry is just now being born, just getting started," said Shanken. "The future needs and depends on institutions like this one to train and educate people to go into the wine industry."

Thompson, the chairman of the Congressional Wine Caucus, noted that the wine industry contributes $13 billion to Sonoma County's economy and $62 billion to the state's economy.

Newsom emphasized the importance of having a program like this in the California State University system. "This is the biggest conveyor belt for talent in the United States of America," he said. "No system in the country does what the CSU system does for people that are more deserving -- one-third of the graduates are first-time graduates of higher education in their family."

Newsom said he has 21 small businesses with close to 1,000 employees in the hospitality, wine and restaurant business. He thanked Shanken for "stepping up in a big way" and "being persuaded by this extraordinary university and this extraordinary community."

The Institute will be housed in the former University Commons building, which will see a $9.2 million renovation. Construction is expected to be finished by summer 2017. After the ceremony, the building, which used to house a student cafeteria, served as the backdrop for an al fresco lunch catered by Michelin-starred chef Charlie Palmer.

Construction of the Wine Spectator Learning Center is funded by private donations, including $3 million from Shanken. Sonoma State's Wine Business Institute was the first academic program in the United States offering degrees focused on wine business. Sonoma State is currently the only school in the nation offering a Wine Business MBA.

The 15,000-square-foot building will include three state-of-the-art classrooms, multimedia venues for production and broadcast of public seminars and events, international-themed gardens and student success pathway, and collaborative spaces for hands-on learning such as a student commons, faculty-industry hub, and café.

Santa Rosa firm TLCD Architecture and San Francisco's BNBT Builders have been chosen to partner on design and construction of the Wine Spectator Learning Center at Sonoma State University. Crews expect to break ground on the $9.1 million project on June 1 with completion and grand opening set...