Outer Space Mission Signals 'Many Successes Yet to Come' From NASA
July 14, 2015 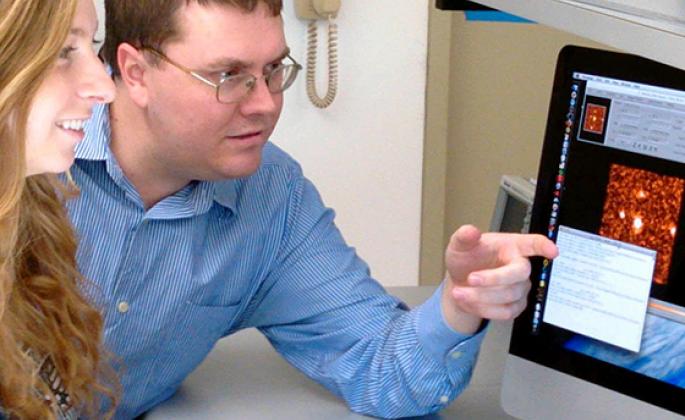 With NASA's flyby of Pluto, the United States became the first nation to visit every planet in the solar system. Sonoma State University physics and astronomy professor Thomas Targett weighs in on the new images and their importance to space exploration.

The New Horizons spacecraft left Florida nine years ago and travelled 3 billion miles to capture images of the outermost planet in our solar system. The photos take more than four hours to transmit back to Earth at light speed, and they are the most detailed images of Pluto and its largest moon, Charon. The flyby occurs on the 50th anniversary of Mariner 4's flyby of Mars, which yielded the first detailed photos of that planet.

Dr. Targett has significant experience in observational astronomy, and contributes to the data reduction, processing and scientific analysis of astronomical imaging in the field of "Big Data."

SSU: Are you excited about seeing the planet in so much detail for the first time?

Thomas Targett: It's wonderful to see these data for the first time, but the best science and images are yet to come (later today). After this point, they will start to take images closer to the dwarf planet that you have to combine together to make a complete image, and it's in those that the real scientific details will emerge.

Were you looking forward to it?

Many of us watched the launch of New Horizons back in 2006, so it's amazing to finally see results from the mission. Back then, Pluto was still considered a "planet," and was only de-classified a few months after the launch. However, that has no real impact on the scientific importance of the mission, only what we call Pluto.

What implications does this hold for the future of space exploration?

The mission itself was to a very distant target, so it's wonderful to see the mission arriving at destination and working well. I think the successful arrival of this mission shows that NASA did a great job building and lunching this project, and demonstrates that there are many successes yet to come in the exploration of the solar system.

And the topic that touches everyone's hearts... Does this change Pluto's status as a non-planet?

The status of Pluto is interesting, as the universe does not really work in the same way we do. We want to point to different things and say this is X and this is Y, case closed. However, in reality there are a whole bunch of gray areas in between. There are small rocky bodies in space, and there are large rocky bodies in space, and we are the ones who give them names like planet or dwarf planet. In the end, I don't think Pluto "cares" much what we call it, it just is what it is, and I'm so happy we have a great mission like this to study more of the solar system.