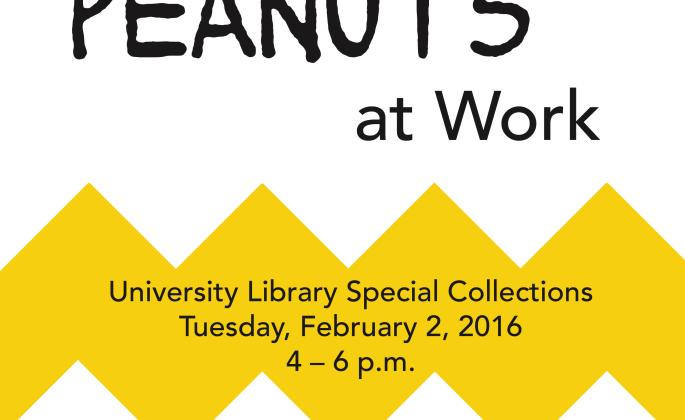 The Jean and Charles Schulz Information Center's 15th Anniversary continues with "Peanuts at Work," a panel discussion featuring cartoonists and archivists from the Charles M. Schulz Museum and Research Center in Santa Rosa on Feb. 2 at 4 p.m. in the Special Collections Department at the Sonoma State University Library.

This cozy gathering includes cookies, cocoa and an opportunity to learn from the people who work with Charlie Brown and Snoopy every day as a panel of professionals from the Charles Schulz Museum and Schulz Creative Associates discuss their work as cartoonists, curators, and archivists building on the legacy of the beloved creations of Charles Schulz. The panel is moderated by Sonoma State Librarian Caitlin Plovnick.

Moderator
Caitlin Plovnick, SSU Librarian
Caitlin Plovnick has an MLIS from Simmons College and an MFA from the Center for Cartoon Studies. She has written about the intersection of libraries and cartooning for sites such as Diamond BookShelf and No Flying No Tights. She has been a librarian at Sonoma State for two years.

Panelists
Donna Almendrala: Staff Artist, Schulz Studio
Donna Almendrala is a cartoonist with an MFA from the Center for Cartoon Studies, and she spends most of her free time playing/obsessing about board games and RPGs.

Cesar Gallegos: Archivist, Charles M. Schulz Museum
Cesar Gallegos is the Archivist at the Charles M. Schulz Museum and Research Center. Since 2013, he has been responsible for overseeing and caring for the Museum's archival collection. Along with providing insight for exhibitions, he works with researcher, licensees, publishers, and patrons interested in studying the life and work of Charles Schulz. Cesar has also traveled throughout the United States conducting oral history interviews with close friends and relatives who knew Charles Schulz. His over nine years in the profession has allowed him to work with unique collections including previously managing the digital lab at the American Museum of Natural History in New York, where he worked on digitizing glass plate negatives from the turn of the century.

Nomi Kane: Staff Artist, Schulz Studio
Nomi Kane is a cartoonist with an MFA from the Center for Cartoon Studies. In the Schulz Studio, she works on art approvals and various art and design projects. Nomi's been drawing all her life and self-publishes an ever-growing litany of mini-comics. In addition to Peanuts, she loves rock and roll, dogs, the Oakland Athletics and civil rights history.

Denis St. John: Staff Artist, Schulz Studio
Denis St. John graduated from the Center for Cartoon Studies. Since then he has been self-publishing his own horror comics and monster zines. Denis has been known to occasionally write for comics and illustrate, mostly monsters for magazines, t-shirts, beer labels, wherever monsters can be found. Before devoting his life to the printed page he was a horror host for a live show in Indiana, and still talks about it, even though it was years ago and no one cares.