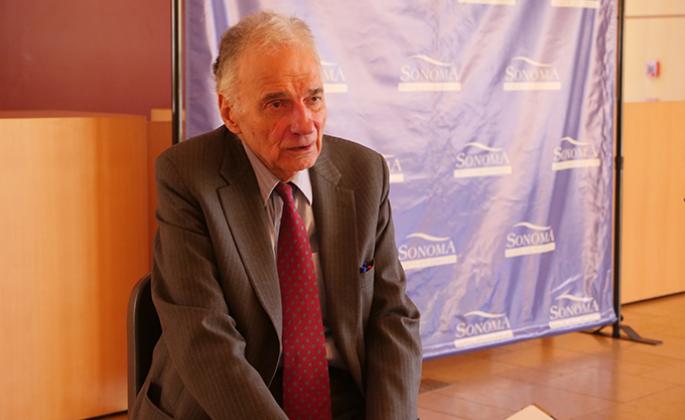 In an interview before his lecture at Sonoma State University, Nader, now 84, remained an unwavering advocate of the people against big corporations and government. He also expressed hope in today’s high school and college students as agents of civic activism.

“First of all they have huge energy,” he said. “Second, they ask the toughest direct questions of their legislators – much better than the press; they’re not censoring themselves; they don’t have axes to grind. Third, there’s something pure about their mission. And they’re beginning to know it.”

Nader, an author, lecturer and attorney noted for his involvement in consumer protection, environmentalism and government, was the speaker for Sonoma State University’s annual H. Andréa Neves and Barton Evans Social Justice Lecture Series on March 5 in the Green Music Center.

He said students must be provoked to get involved, and the tragic school shooting in Parkland, Florida, was such a provocation that is now generating activism.

“It shouldn’t take these kinds of violent tragedies because there are a lot of silent forms of violence – like toxic pollution – that don’t rise to the occasion of media attention.” He pointed to climate disasters, a global flu pandemic, and the “vast overspending of our military budget and underspending of our health and safety domestic budget” as future tragedies.

“There are going to be a lot of crises. I hope this young generation will rise up to it. They’ve got the tools to do it and they have the numbers.”

The work to keep the citizenry engaged and informed is never-ending, he said.

“The forces of injustice take no time off. I’ve always said that’s why we work weekends.”

Nader said one of the highlights of his career has been educating people about the difference that one person can make.

“One person can never do it alone, but one person breaks through, coalesces the forces in support of a lot of people.

Nader first made headlines as a young lawyer in 1965 with his book “Unsafe at Any Speed,” a scathing indictment that lambasted the auto industry for producing unsafe vehicles. The book led to congressional hearings and the passage of a series of automobile safety laws in 1966. In his most recent book, “Breaking Through Power,” Nader draws from a lifetime waging—and often winning—David vs. Goliath battles against big corporations and government.

One of his top priorities is defending the U.S. civil justice system. He said corporate lobbyists and anti-consumer legislators have worked on both the federal and state levels to restrain consumers' rights to seek justice in court against wrongdoers in the area of product liability, securities fraud and medical negligence. Nader continues working to advance meaningful civic institutions and citizen participation as an antidote to the lack of corporate and government accountability.