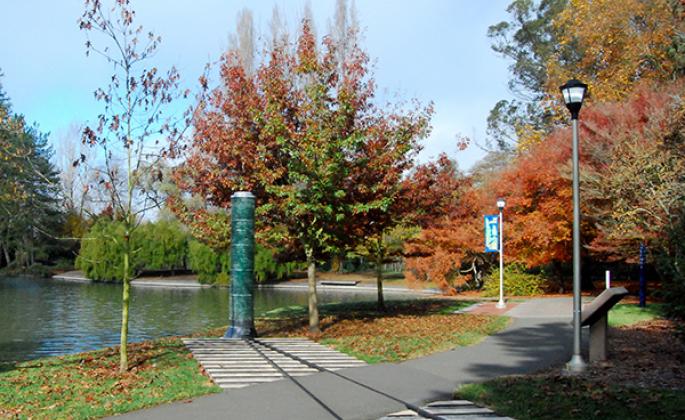 Dr. Martin Luther King Kr. said, "Our lives begin to end the day we become silent about things that matter." In the spirit of Dr. King's words, Sonoma State University hosts a gathering of Sonoma County middle and high school teachers on June 14 at 10:30 a.m. at the University's Holocaust and Genocide Memorial Grove to hear stories from Holocaust survivors and their families.

In January, Sonoma State University Sociology Professor and Dean Emerita of Social Sciences Elaine Leeder and others started the Stories Project to engage middle and high school students and teachers in the history of the Holocaust and other genocides. She says the group has spoken to more than 2,000 students this year alone, and she has personally spoken to about 200. "I tell my family's story, and the kids see a real person who was connected to the Holocaust," she says.

At the heart of this project is oral history. "This is probably the last chance these students will get to hear from an eyewitness to that piece of history," says retired Rancho Cotate High School teacher Flora Lee Ganzler, an organizer of the Stories Project. Though many speakers are children of survivors, some are survivors themselves, now in their 90s. This project is the first time many of them have shared their stories with students.

Teachers have been invited to the June 14 event to give them tools to demonstrate the realities and lasting effects of genocide. So far, the group has made presentations at schools in Petaluma, Healdsburg, Forestville and Rohnert Park. Teachers will also be invited to bring students on future field trips to see the memorial grove in person.

Leeder, whose father was the only one in his family to survive the Holocaust, will speak at the event. Other speakers include Sonoma State Art Professor Jann Nunn, whose green glass sculpture is a centerpiece of the grove, and David Salm, son of Holocaust survivors Erna and Arthur Salm, for whom the grove is named.

The grove includes a tree derived from the horse chestnut tree that grew outside Anne Frank's secret annex where she hid from Nazis during World War II. The sapling was one of 11 awarded by the Anne Frank Center USA after the original tree was felled by wind in 2010. It was planted in the grove during a ceremony in 2013.

The Holocaust and Genocide Memorial Grove at Sonoma State University is designed to honor survivors and victims of the genocides committed throughout the world, including the Native American Genocide, the Armenian Genocide, the Jewish Holocaust, the Cambodian Genocide, the Rwandan Genocide, and the current-day genocide in Darfur. Another aim of the monument is to recognize educators, scholars and activists working for awareness, tolerance and human rights across the globe. Situated in a tranquil lakeside setting on the University campus, the grove provides a setting for contemplation and remembrance.

Created by SSU Associate Professor of Sculpture Jann Nunn, the sculpture's design consists of two 40-foot-long railroad tracks embedded into the lawn. The converging steel lines emerge from a gentle slope of ground and intersect a pedestrian footpath. The steel lines come within six inches of each other, ending with light from an internally illuminated glass column that stands ten feet tall. This glass tower is made up of 5,000 pieces of glass, individually cut by Nunn. Laid in the position of railroad ties are four hundred and sixty bricks, inscribed with the names and communities of those who have endured genocide.

She gently grasped the branch and kissed a newly formed leaf of the horse chestnut tree in Sonoma State University's Holocaust and Genocide Memorial Grove. "It reminds me of my childhood," says Helena Foster, gently releasing the branch and...

As both President of Sonoma State University and as a private citizen of the United States of America, I am horrified by the attack on the U.S. Capitol that took place yesterday at the hands of violent extremists, and at the clear direction and encouragement of the President of the...