Multi-Talented Freshman Travis Newman Excels on the Court and the Stage
November 21, 2011 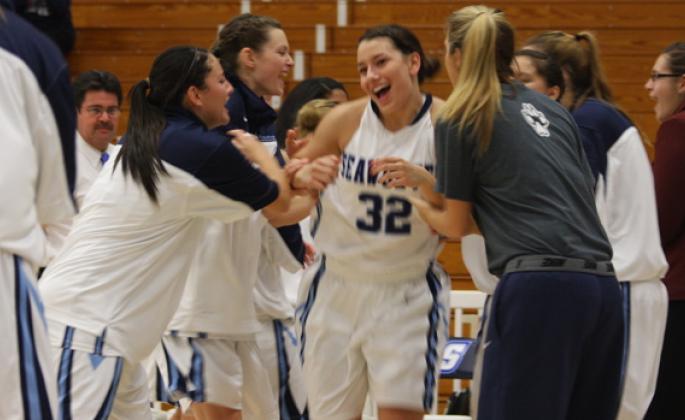 Travis Newman, No. 32, laughs with her teammates

It's not everyday that an accomplished high school athlete, pressured with multiple athletic scholarship offers, chooses a school more for its academics, rather than its athletics. But that's just why the multi-talented Travis Newman, a native of southern California, decided to play for the Sonoma State women's basketball team.

Newman was a four-year varsity girl's basketball standout at Chaminade High School in West Hills, Calif. and is one of several new additions to the Seawolves this season. But not only did she succeed on the basketball court during her prep career, but she also played tennis and was even part of the school's jazz band for four years.

"The girl's basketball team at (Chaminade HS) during my senior year was starting to be seen and supported," Newman recalls. "I remember seeing the bleachers packed with people and that was a great feeling."

Individually, Newman earned First Team All-League and Second Team All-California Interscholastic Federation (CIF) honors. She was also named the Most Valuable Player of her team. Because of her success, Newman was faced with many choices for her future as an athlete, but moreso as a "student".

"As schools approached me with offers, I really looked into a school that fit me best," stated Newman.

She was looking for a university that fit her love for basketball, but also for music. Her main priority was her future.

"My basketball career will end after four years of college, so I had to be realistic and choose what was best for me academically," stated Newman.

As her choices narrowed down, she continued to keep her eyes on the small, NCAA Division II campus in Rohnert Park, Calif. It was on her official visit that her immediate future became clear.

Knowing Travis had a huge interest in music and the programs that Sonoma State had to offer, SSU head coach Mark Rigby first took Travis to meet music professor Doug Leibinger so she could go though a small audition. Following the audition, she joined the women's basketball team in the gym to play a couple of pick-up games.

"After open gym, a couple of the girls went out of their way to tell me that 'she's really good'," Rigby said. "Later that day as I was walking towards my car, Doug (Leibinger) stopped his car in the middle of the road, rolled down his window and yelled out 'she's really good'."

"She basically had two auditions in less than three hours and nailed both of them," Rigby added.

From then on, Newman was sold on Sonoma State. Coupled with the university's outstanding music department and thriving athletic programs at SSU, her love and passion for music and basketball drove her final decision to become a Seawolf.

Newman, who stands at 6-foot-1, cannot only dunk a basketball, but she is an accomplished pianist and vocalist, too. She is now a music major, touching on the study of jazz. Newman is enjoying her first semester of college and is especially enjoying the music program. However, the only downside of her decision to attend SSU is the weather.

"I'm not at all used to this cold weather," Newman admits, "but I guess I have to get used to it for the next four years."

Besides the cold weather, she is ecstatic that she chose to attend Sonoma State and knows she made the right decision.

And her coach couldn't have agreed more.

"I couldn't be more pleased with the fact that Travis is so accomplished in both endeavors (music and basketball)," Rigby said. "She's a tremendous basketball talent. She's making the adjustment from playing one position last year on her high school team to playing three different positions in college. She also has improved dramatically on defense in a very short time, but she's still adjusting to the physical and mental demands of college basketball."

However," Rigby added, "we want to do everything we can to support her music. As long as we communicate well, and she keeps us informed, we'll find a way for it to work. She's a team player and very mature about her responsibilities."

With the 2011-12 regular season getting under way on Saturday, the true freshman is ready to play. Although it's a bit intimidating, Newman has warmed up to her new team and has enjoyed every minute of it. On Oct. 28, Newman started in the first exhibition game of the 2011-12 season against Cal State San Marcos. Her first collegiate game was different from high school, but her love for the game drives her passion for competition and she scored a team-high 12 points to lead the Seawolves to a 63-62 victory on their home court.

With the women's season already heating up, 2011-12 looks promising for this multi-talented phenom.

Despite holding a three-point lead early in the second half, the No. 7 seed Sonoma State men's basketball team saw its incredible season come to an end Friday, Mar. 10 with a 73-61 loss to No. 2 seed Hawaii Pacific in the NCAA Division II West Region Tournament quarterfinals at RIMAC Arena in La...