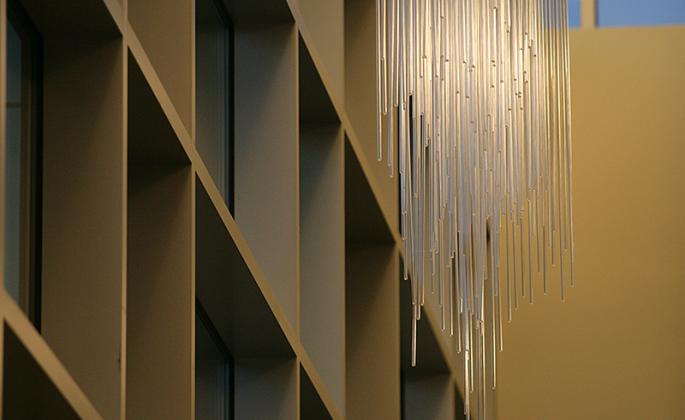 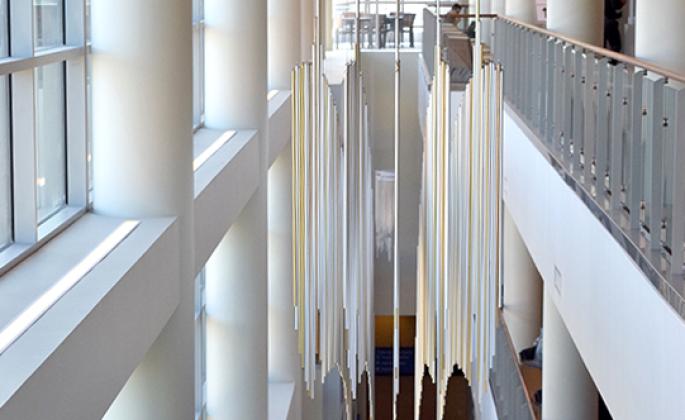 Three sculptures have been installed in Sonoma State University's Student Center to inspire students and create a sense of space in the university's newest building.

Aurora II: Redux, a three-part sculpture by Sonoma State alum Catherine Daley, hangs at eye-level to the second floor. Its clear tubes wafting in the circulated air of the Student Center evoke the dance of the northern lights.

Daley, who worked as a photojournalist for 10 years before earning her degree in studio art at SSU in 2013, says the piece alludes to music and references aurora borealis as a "curtain of light." The university purchased her sculpture for permanent display in the Student Center after it drew praise at a 2014 University Library Art Gallery exhibition.

"I'm delighted to have Sonoma State as its final resting place," says Daley, who continues to be a familiar face on campus as a volunteer in art department workshops. "I have such high regard for the university."

A larger, kinetic sculpture by Southern California artist Dan Benedict hangs over the staircase, flowing through all three floors of the building. A slow wave of hundreds of metal tubes flows uphill on puppet strings, with an arch on wheeled tracks pushing the rise and fall of the hanging cylinders every ten minutes. The action is triggered via motion sensor, which reactivates every 10 minutes.

The piece was commissioned specifically for the space over a year ago, says Benedict, who adds that it's the largest kinetic sculpture he's created and his first to be installed in a state university.

With similar motifs and hanging installations, the two works of art almost look like they were made together, though they came to be from entirely different circumstances. "I think it's beautiful," says Daley. "It's like a conversation between the two pieces."

The third piece, the Great Wall of China, greets students as they enter the Kitchens, the largest dining area on the first floor of the Student Center. (Yes, it does feature dining ware.) The artist of that piece, Erin Benedict, also worked on portions of the interior design for the Student Center.

Student artwork is also scheduled to be on display through the building starting this fall, rotating each semester to showcase a new selection of pieces.