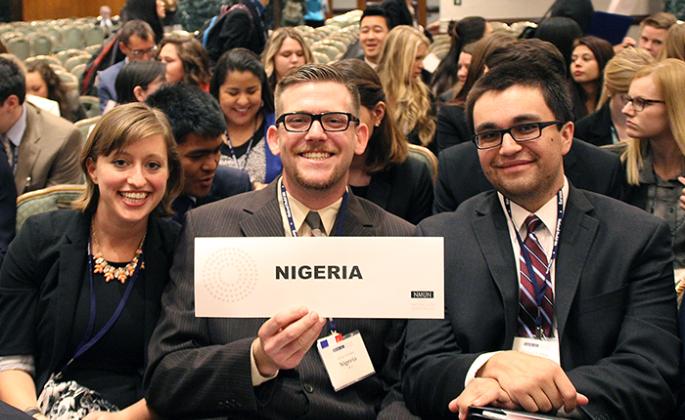 The students, led by political science professor Cynthia Boaz, participated in the program with more than 4,000 students from 400 universities across the globe. This year, Sonoma State represented Nigeria, which presented a variety of difficulties because of the nation's controversial politics and ongoing national issues. The team handled it well, earning Sonoma State's 10th award in the past five years.

Model UN is both a course in SSU's political science department and a club, combining public speaking, foreign policy and debate. Students from a wide range of majors participated this year, though the program typically appeals to political science and global studies majors. Boaz believes students with a variety of academic strengths bring unique perspectives to the program.

"Historically, students who participate are mostly political science majors who have known about the program. In the last few years, I've tried to promote it outside of political science and even the social sciences," says Boaz.

She credits the Model UN program with helping students develop skills like communication, collaboration, teamwork and research that are essential in any career field.

"I can't see any way Model UN doesn't help prepare students for the future in some way, regardless of what someone wants to do with their life," says Boaz.

Boaz credits Sonoma State's success at the Model UN conference to the students' preparation, dedication and commitment. "To be successful in Model UN both at Sonoma State and in general, there is a lot of outside preparation," she says. "Students also have to be team players because Model UN is all about the strength of the delegation as a whole, so if there is someone who isn't pulling their weight, it affects the entire delegation and that is a value I try to reiterate with Model UN students."