Meet the Class of 2018: Malik-Charles Wade

Malik-Charles Wade's journey to college was unique, and the same can be said about his time at Sonoma State
May 18, 2018 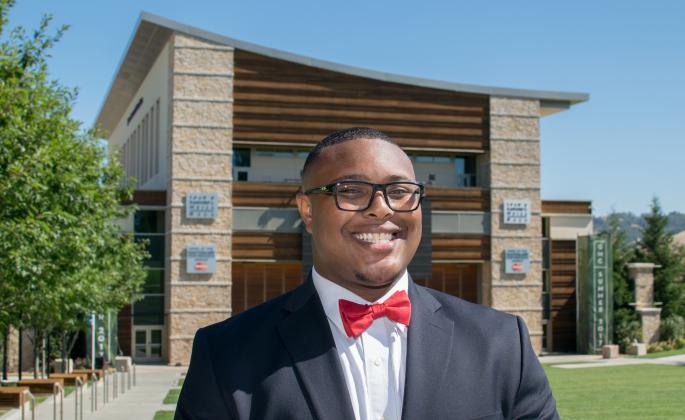 Malik-Charles Wade performs during his senior recital on April 28

Malik-Charles Wade, who grew up in Novato, is no stranger to dealing with hardships. His parents divorced when he was young, and his father passed away when he was 15. His mother, who lived in the Midwest at the time, let him stay with a legal guardian in Marin County so as not to disrupt his education. This was difficult for him at times, but the 22-year-old says he has spent his time at Sonoma State trying to not let himself be defined by the losses in his life but instead by the art he has produced.

Much of this culminated on April 28 when Wade, a fifth-year music education major, performed his Senior Recital, titled “S.H.O.W. Time!” at Schroeder Hall. In addition to playing the clarinet, Wade sang in English, Italian and French, to songs that he said have a personal story to them.

“I wanted to bring out the other side of auditory arts - stories that help bring out the musical elements of my performance,” said Wade. However, there was added excitement around the recital because Wade’s mother, who has resided in Chicago since Wade was 11, was in the crowd. She was crying with pride. Despite the distance, Wade credits his mom for getting him to where he is now. “My whole life has been about getting to know my mom,” said Wade, “But without her I wouldn’t have been on that stage.”

Wade said he almost gave up music, which he has played since he was young. “My dad was the main advocate of me staying with music, and I didn’t want to go through it if he wasn’t around,” he said. But he credits the Sonoma State music department with encouraging him to grow into the performer he is today. “I could speak to any faculty member in the department about anything, and that’s the type of support that got me through my time at SSU,” said Wade. He especially credits Lynn Morrow, opera and musical theatre director and vocal program director at Sonoma State, for being a role model. She accompanied him when he went to fill out the paper work to declare himself a music major. “Malik is a phenomenal human being,” said Morrow. “He has been supportive of everyone in the department and has truly been a gift to our program.”

Wade also has played a role in three plays on campus, including the 2014 production of “Facing our Truth,” a series of short plays discussing theme of race. The Novato native is also a member of the predominantly African-American fraternity Kappa Alpha Psi. At one point during his college career he was the only active member and had to plan an entire three-day reunion for more than 100 fraternity brothers, family members and friends to honor the 30-year history of the fraternity at Sonoma State. “People have an assumption that Greek life will change them,” said Wade. “But when you find an organization or outlet that fits you it will only make you stronger.”

After graduation, Wade plans to take a year off to travel, take acting classes and audition for plays. He plans to return to Sonoma State in 2019 to get his teaching credential and his masters in education, a necessary step for him to fulfil his goal of teaching at the K-12 level. While Wade hopes to educate the next generation musically, his ultimate goal is to lead a symphony. “There’s nothing more I could have done here,” said Wade, “My goal now is to make an impact on the future generation in a positive way.”