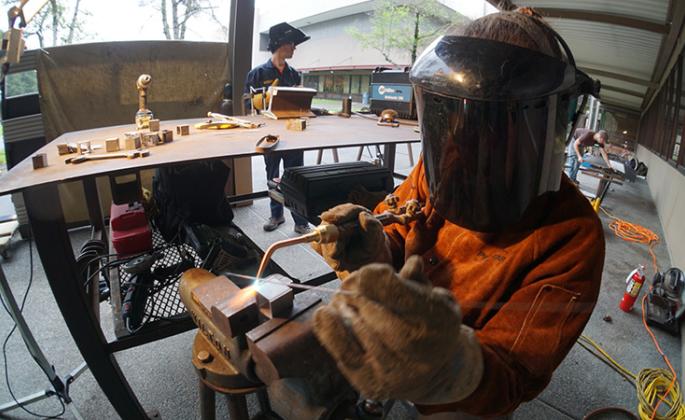 The winning team, comprised of recent Sonoma State engineering science graduates Erik Zaro, Brandon Mondo and Aram Yegiazaryan, as well as recent UC Davis grad Travis Pereira, worked for 27 hours straight in the marathon competition to make a near field communication (NFC) coffee cup. They were awarded a $1,500 prize for their first place project out of 28 teams.

The project applies a chip to any reusable coffee cup that is coded with your usual drink order and payment information, so a barista would only need to scan the cup and make the order. A corresponding app tracks the purchase, eliminating the need for dangerous pre-caffeine communication and keeping one more paper cup out of the landfill.

The team also will receive support from SoCo Nexus, a business incubator at Somo Village, to work more on their invention.

Second place went to a team that included Sonoma State's Pam Van Halsema, dean's strategist in the School of Education, for a shadow box that allows for creative storytelling in the classroom.

Third place was a tie between two Sonoma State student teams. One project was a bike lock unlocked via fingerprint scanner and the other a dashboard-mounted system to alert hearing-impaired drivers when emergency sirens were sounding near them. Another student won an artist award for a mechanical wheel that contained shifting pieces on the inside.

Participants included physicists, engineers, computer scientists, welders, burners and artists. Many of the dedicated makers worked through the night, getting little to no sleep, to prepare their creation for the presentation the following day.

The event was sponsored in part by the Sonoma State University School of Business and Economics, and was executed by SSU entrepreneurship students.

(Rohnert Park) — Dr. Jean-Francois Coget, an associate dean and professor at Cal Poly, San Luis Obispo, has been named the new dean of the School of Business and Economics at Sonoma State, the university announced today.

Coget currently serves as associate dean for academic programs at...