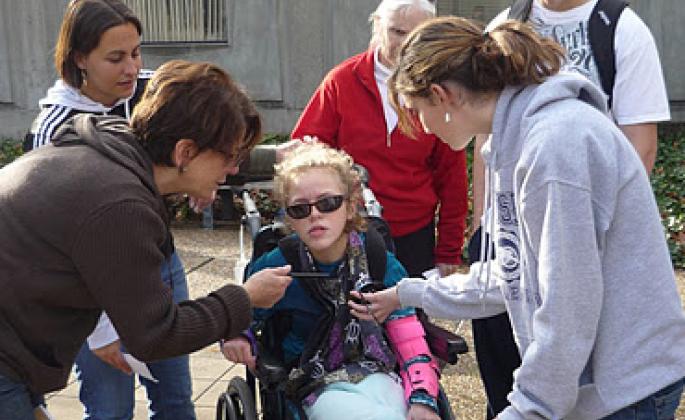 Farahmand makes sure his new engineering students develop designs that have a real world application and a long shelf life.

After talking with Elaine McHugh, Kinesiology Professor and Director of Saturday Sidekicks, a program for children with disabilities, he assigned his students the task of designing a machine that could propel a ball using a push-button switch.

Some children with physical disabilities, like Jazlyn LeClair of Rohnert Park, have difficulty using their hands or feet to grasp and throw or to kick balls like other children, and thus it's challenging for them to engage in playground games with their peers, and they sometimes end up staying on the sidelines during outdoor play.

Farahmand and McHugh talked to the students about what the machine needed to do and why it was needed. The SSU students then visited Saturday Sidekicks to meet the young people who could benefit from the machine and spoke with family members.
The shopping for parts was handled at local hardware and electric supply stores.

Each group of 4-5 students designed either a throwing or a kicking machine and brought them to Saturday Sidekicks to be tried out. After the initial trials by Jazlyn and a friend named Troy, two groups elected to make additional modifications and bring the improved models back the next semester.

In engineering speak, the challenge was to "devise a system to quickly release the potential energy stored in the wooden mallet." One of the designs, a purple-and-white-striped rolling PVC-based kicking machine operating with a wireless switch, was a particular hit. Using a modified funnel and a wooden board they created a stable platform from which to propel a cylindrical object.

Created by Team Hufflepuff - Campbell Smith, Ryan McKinstry, William Chang and Mason Rothfeld - the final unit will be used by Saturday Sidekicks children when the course begins on Jan. 28.

Now Jazlyn could participate in a kicking game with her peers. The machine also attracts children with and without disabilities, as it's fun to push the button and see the big wooden mallet swing down and "kick" the ball across the playground.

Jazlyn has continued to use the device this semester and even brought it to the Sidekicks Cycle camp last summer, so other children with cerebral palsy could play with it.

To see a video of the project, visit http://tinyurl.com/8286sqz.

To see other projects in Dr. Farid Faharmand's Advanced Technology in the Interests of Society Laboratory visit http://faridfarahmandresearch.blogspot.com/.

A friend of Sonoma State University professor Farid Farahmand lay in a hospital bed at the Redwood City Kaiser Permanente Neurology Center in November 2016. Recovering from...